An automotive navigation system is a satellite navigation system designed for use in automobiles. It typically uses a GPS navigation device to acquire position data to locate the user on a road in the unit's map database. Using the road database, the unit can give directions to other locations along roads also in its database. Dead reckoning using distance data from sensors attached to the drivetrain, a gyroscope and an accelerometer can be used for greater reliability, as GPS signal loss and/or multipath can occur due to urban canyons or tunnels.

Some sorts can be taken out of the car and used hand-held while walking.

Automotive navigation systems were the subject of extensive experimentation, including some efforts to reach mass markets, prior to the availability of commercial GPS.

Most major technologies required for modern automobile navigation were already established when the microprocessor emerged in the 1970s to support their integration and enhancement by computer software. These technologies subsequently underwent extensive refinement, and a variety of system architectures had been explored by the time practical systems reached the market in the late 1980s. Among the other enhancements of the 1980s was the development of color displays for digital maps and of CD-ROMs for digital map storage.[1]

However, there is some question about who made the first commercially available automotive navigation system. There seems to be little room for doubt[says who?] that Etak was first to make available a digital system that used map-matching to improve on dead reckoning instrumentation. Etak's systems, which accessed digital map information stored on standard cassette tapes, arguably made car navigation systems practical for the first time.[2] However, Japanese efforts on both digital and analog systems predate Etak's founding.[citation needed]

Steven Lobbezoo developed the first commercially available satellite navigation system for cars. It was produced in Berlin from start 1984 to January 1986. Publicly presented first at the Hannover fair in 1985 in Germany, the system was shown in operation on the evening news (item in the Hannover fair) from the first German television channel in that year. It used a modified IBM PC, a large disc for map data and a flat screen, built into the glove compartment. It was called Homer (after the device from a James Bond movie).

Alpine claims to have created the first automotive navigation system in 1981. However, according to the company's own historical timeline,[3] the company claims to have co-developed an analog automotive navigation product called the Electro Gyrocator, working with Honda. This engineering effort was abandoned in 1985. Although there are reports of the Electro Gyrocator being offered as a dealer option on the Honda Accord in 1981, it's not clear whether an actual product was released, whether any customers took delivery of an Electro Gyrocator-equipped Accord, or even whether the unit appeared in any dealer showrooms; Honda's own official history appears to pronounce the Electro Gyrocator as not practical. See below for Honda's history of the project.

Honda claims[4] to have created the first navigation system starting in 1983, and culminating with general availability in the 1990 Acura Legend. The original analog Electro Gyrocator system used an accelerometer to navigate using inertial navigation, as the GPS system was not yet generally available. However, it appears from Honda's concessions in their own account of the Electro Gyrocator project that Etak actually trumped Honda's analog effort with a truly practical digital system, albeit one whose effective range of operation was limited by the availability of appropriately digitized street map data.

[...] progress in digital technology would not stop simply because Honda had turned its attention to analog. In 1985, for example, the U.S. company ETAK introduced its own digital map navigation system. Although the system's effective range-the area of geographical coverage-was limited, the announcement was a dour one for Nakamura and his staff. Therefore, ultimately the development of a practical analog system was shelved. The staff experienced indescribable feelings of disappointment. The development of [Honda's] digital map navigation system resumed in 1987, following a three-year hiatus.[5]

Both Mitsubishi Electric[6] and Pioneer[7] claim to be the first with a GPS-based auto navigation system, in 1990. Also in 1990, a draft patent application was filed within Digital Equipment Co. Ltd. for a multi-function device called PageLink that had real-time maps for use in a car listed as one of its functions.

However it was not until 2000 that the United States made a more accurate GPS signal available for civilian use.[11]

Navigation systems may (or may not) use a combination of any of the following:

The road database is a vector map of some area of interest. Street names or numbers and house numbers are encoded as geographic coordinates so that the user can find some desired destination by street address (see map database management).

Points of interest (waypoints) will also be stored with their geographic coordinates. Point of interest specialties include speed cameras, fuel stations, public parking, and "parked here" (or "you parked here").

Contents can be produced by the user base as their cars drive along existing streets (Wi-Fi) and communicating via the internet, yielding a free and up-to-date map. 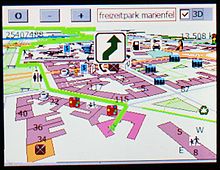 Navigation with Gosmore, an open source routing software, on a personal navigation assistant with free map data from OpenStreetMap.

Formats are almost uniformly proprietary; there is no industry standard for satellite navigation maps, although Navteq are currently trying to address this with S-Dal (see below).

The map data vendors such as Tele Atlas and Navteq create the base map in a standard format GDF, but each electronics manufacturer compiles it in an optimized, usually proprietary format. GDF is not a CD standard for car navigation systems. GDF is used and converted onto the CD-ROM in the internal format of the navigation system.

CARiN Database Format (CDF) is a proprietary navigation map format created by Philips Car Systems (this branch was sold to Mannesman VDO, VDO/Dayton in 1998, to Siemens VDO in 2002, and Continental in 2007.) and is used in a number of navigation-equipped vehicles. The 'CARiN' portmanteau is derived from Car Information and Navigation.

This is a proprietary map format published by Navteq, who released it royalty free in the hope that it would become an industry standard for digital navigation maps. Vendors currently using this format include:

The format has not been very widely adopted by the industry.

The road database may be stored in solid state read-only memory (ROM), optical media (CD or DVD), solid state flash memory, magnetic media (hard disk), or a combination. A common scheme is to have a base map permanently stored in ROM that can be augmented with detailed information for a region the user is interested in. A ROM is always programmed at the factory; the other media may be preprogrammed, downloaded from a CD or DVD via a computer or wireless connection (bluetooth, Wi-Fi), or directly used utilizing a card reader.

Some newer systems can not only give precise driving directions, they can also receive and display information on traffic congestion and suggest alternate routes. These may use either TMC, which delivers coded traffic information using radio RDS, or by GPRS/3G data transmission via mobile phones.

One key type of real-time data is traffic information, which includes:

Integration and other functions

Vehicles produced by Subaru and Lexus, as well as Lexus' parent company, Toyota, lock out many of the features when the vehicle is in motion. The manufacturers claim this is a safety feature to avoid the driver being distracted.

A number of road accidents in the UK have been attributed to misdirection by satellite navigation systems. On May 11, 2007, a driver followed satellite navigation instructions in the dark and her car was hit by a train on a rail crossing that was not shown on the system.[13] In Exton, Hampshire, the County Council erected a sign warning drivers to ignore their "sat nav" system and to take another route, because the street was too narrow for vehicular traffic and property damage resulted from vehicles getting stuck.[14]

On March 25, 2009, a man drove down a steep mountain path and almost off of a cliff after he was allegedly directed by his portable GPS system. He was finally stopped by a wire fence.[15]

Misdirection can also occur when a road is altered either permanently or temporarily, such as during road re-construction.

In July 2007, an Australian man successfully overturned a speeding conviction after evidence from a GPS navigational track proved that he did not exceed the speed limit.[16]

A vehicle can be retrofitted with a GPS navigation device unit if it did not originally have one. There are three approaches that can be taken here:

This type of GPS navigation device is not permanently integrated into the vehicle, having only a simple bracket to mount the device on the surface of the dashboard and powered via the car cigarette lighter. This class of GPS unit does not require professional installation and can typically be used as handheld device, too.

Benefits of this type of GPS unit include low cost as well as the ability to move them easily to other vehicles. Their portability means they are easily stolen if left inside the vehicle. Furthermore, not having a compass, accelerometer or inputs from the vehicle's speed sensors, means that they cannot navigate as accurately by dead reckoning as some built-in devices when there's no GPS signal. More modern portable devices such as the TomTom 920, have an inbuilt accelerometer to try to address this.

Many vehicle manufacturers offer a GPS navigation device as an option in their vehicles. Customers whose vehicles did not ship with GPS can therefore purchase and retrofit the original factory-supplied GPS unit. In some cases this can be a straightforward "plug-and-play" installation if the required wiring harness is already present in the vehicle. However, with some manufacturers, new wiring is required, making the installation more complex.

Modern Factory Navigation System (as fitted to a 2009 U.S. Honda Accord)

The primary benefit of this approach an integrated and factory-standard installation. Many original systems also contain a gyrocompass or accelerometer and may accept input from the vehicle's speed sensors, thereby allowing them to navigate via dead reckoning when a GPS signal is temporarily unavailable.[17] However, the costs can be considerably higher than other options. In some cases, it may even be more economical to buy a similar vehicle that already has a factory-fitted GPS.

A number of manufacturers supply aftermarket GPS navigation devices that can be integrated permanently into the vehicle. A typical location for such an installation is the DIN slot for the radio/tape/CD. However, in extreme cases, the dashboard may also be remodeled to accommodate the unit.

This approach can be considered a trade off between the previous two options. Benefits include a more secure and better cosmetic finish than a portable device, and lower cost compared to the installation of an original factory-supplied GPS.

Smartphones with GPS, and other navigation devices, may also be used without installing in a car.

Establishing points of interest in real-time and transmitting them via GSM cellular telephone networks using the Short Message Service (SMS) is referred to as Gps2sms. Some vehicles and vessels are equipped with hardware that is able to automatically send an SMS text message when a particular event happens, such as theft, anchor drift or breakdown. The receiving party (e.g., a tow truck) can store the waypoint in a computer system, draw a map indicating the location, or see it in an automotive navigation system.