A card reader is a data input device that reads data from a card-shaped storage medium. Historically, paper or cardboard punched cards were used throughout the first several decades of the computer industry to store information and write programs for computer system, and these were read by punched card readers. More modern card readers are electronic devices that use plastic cards imprinted with barcodes, magnetic strips, computer chips or other storage medium.

Some laptops have a flash upgradeable firmware. The card reader supplies the integrated circuit on the smart card with electricity. Communication is done via protocols and you can read and write to a fixed address on the card.

If the card is not using any standard transmission protocol, but uses a custom/proprietary protocol, it has the communication protocol designation T=14.[1]

The latest[which?] PC/SC CCID specifications has defined a new smart card framework. It works with USB devices with the specific device class 0x0B. Readers with this class do not need device drivers when used with PC/SC-compliant operating systems, because the OS supplies it by default[citation needed].

PKCS#11 is an API, designed to be platform independent, defining a generic interface to cryptographic tokens such as smart cards, allowing applications to work without knowledge of the reader details. 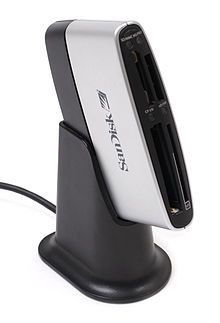 A USB card reader like this one, will typically implement the USB mass storage device class.

A memory card reader is a device, typically having a USB interface, for accessing the data on a memory card such as a CompactFlash (CF), Secure Digital (SD) or MultiMediaCard (MMC). Most card readers also offer write capability, and together with the card, this can function as a pen drive.

Access control readers may be classified by functions they are able to perform and by identification technology:

A barcode is a series of alternating dark and light stripes that are read by an optical scanner. The organization and width of the lines is determined by the bar code protocol selected. There are many different protocols but Code 39 is the most popular in the security industry[citation needed]. Sometimes the digits represented by the dark and light bars are also printed to allow people to read the number without an optical reader. The advantage of using bar code technology is that it is cheap and easy to generate the credential, and it can easily be applied to cards or other items. However the same affordability and simplicity makes the technology susceptible to fraud, because fake barcodes can also be created cheaply and easily, for example by photocopying real ones. One attempt to reduce fraud is to print the bar code using carbon-based ink and then cover the bar code with a dark red overlay. The bar code can then be read with an optical reader tuned to the infrared spectrum, but can not easily be copied by a copy machine. This does not address the ease with which bar code numbers can be generated from a computer using almost any printer.

There are several forms of biometric identification employed in access control: fingerprint, hand geometry, iris and face recognition. The use of biometric technology significantly increases security level of systems because it eliminates such problems as lost, stolen or loaned ID cards, and forgotten or guessed PINs[citation needed]. The operation of all biometric readers is alike: they compare the template stored in memory to the scan obtained during the process of identification. If the probability that the template in the memory and the live scan belong to the same person is high enough, the ID number of that person is sent to a control panel. The control panel then checks permissions of the user and makes the decision whether to grant access or not. The communication between the reader and the control panel is usually done in the industry standard Wiegand protocol. The only exception is intelligent biometric readers that do not require any panels and directly control all door hardware.

Biometric templates may be stored in the memory of readers, in which case the number of users is limited by reader memory size. Readers currently available in the market may store up to 50,000 templates. Template of each user may also be stored in the memory of his/her smart card. This option removes all limits to the number of system users, but it requires each user to have a card and makes finger-only identification impossible. Biometric templates may also be stored in the memory of a central server PC. This option is called "server-based verification". Readers simply read biometric data of users and forward it to the main computer for processing. Such systems support large number of users, but they are very much dependent on the reliability of the central server and communication lines.

1-to-1 and 1-to-many are the two possible modes of operation of a biometric reader.

Magnetic stripe technology, usually called mag-stripe, is so named because of the stripe of magnetic oxide tape that is laminated on a card. There are three tracks of data on the magnetic stripe. Typically the data on each of the tracks follows a specific encoding standard, but it is possible to encode any format on any track. A mag-stripe card is cheap compared to other card technologies and is easy to program. The magnetic stripe holds more data than a bar code can in the same space. While a mag-stripe is more difficult to generate than a bar code, the technology for reading and encoding data on a mag-stripe is widespread and easy to acquire. Magnetic stripe technology is also susceptible to misreads, card wear, and data corruption.

Wiegand card technology is a patented technology using embedded ferromagnetic wires strategically positioned to create a unique pattern that generates the identification number. Like magnetic stripe or bar code, this card must be swiped through a reader to be read. Unlike those other technologies the identification media is embedded in the card and not susceptible to wear. This technology once gained popularity because of the difficulty in duplicating the technology creating a high perception of security. This technology is being replaced by proximity cards because of the limited source of supply, the relatively better tamper resistance of proximity readers, and the convenience of the touch-less functionality in proximity readers.

The Wiegand effect was used in early access cards. This method was abandoned in favor of other technologies. Card readers are still referred to as "Wiegand output readers" but no longer use the Wiegand effect. The new technologies retained the Wiegand upstream data so that the new readers were compatible with old systems. A proximity reader radiates a 1" to 20" electrical field around itself. Cards use a simple LC circuit. When a card is presented to the reader, the reader's electrical field excites a coil in the card. The coil charges a capacitor and in turn powers an integrated circuit (IC). The integrated circuit outputs the card number to the coil which transmits it to the reader.

In the 26-bit Wiegand format, bit 1 is an even parity bit. Bits 2–9 are a facility code. Bits 10–25 are the card number. Bit 26 is an odd parity bit. 1/8/16/1. Other formats have a similar structure of a leading facility code followed by the card number and including parity bits for error checking, such as the 1/12/12/1 format used by some American access control companies.

Wiegand was also stretched to 34 bits, 56 bits and many others.

There are two types of smart cards: contact and contactless. Both have an embedded microprocessor and memory. The smart card differs from the card typically called a proximity card in that the microchip in the proximity card has only one function: to provide the reader with the card's identification number. The processor on the smart card has an embedded operating system and can handle multiple applications such as a cash card, a pre-paid membership card, and even an access control card. The difference between the two types of smart cards is found in the manner with which the microprocessor on the card communicates with the outside world. A contact smart card has eight contacts, which must physically touch contacts on the reader to convey information between them. Since contact cards must be inserted into readers carefully and the orientation has be observed the speed and convenience of such transaction is not acceptable for most access control applications. The use of contact smart cards is physical access control is limited mostly to parking applications when payment data is stored in card memory and when the speed of transactions is not important. A contactless smart card uses the same radio-based technology as the proximity card with the exception of the frequency band used: higher frequency (13.56 MHz instead of 125 kHz) allows to transferring more data and communicating with several cards at the same time. A contactless card does not have to touch the reader or even be taken out from a wallet or purse. Most access control systems only read serial numbers of contactless smart cards and do not utilize the available memory. Card memory may be used for storing biometric data (i.e. fingerprint template) of a user. In such case a biometric reader first reads the template on the card and then compares it to the finger (hand, eye, etc.) presented by the user. This way biometric data of users does not have to be distributed and stored in the memory of controllers or readers, which simplifies the system and reduces memory requirements.

Smartcard readers have been targeted successfully by criminals in what is termed a supply chain attack, in which the readers are tampered with during manufacture or in the supply chain before delivery. The rogue devices capture customers' card details before transmitting them to criminals.[2] 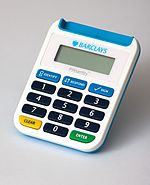 Some banks have issued hand-held smartcard readers to their customers to support different electronic payment applications: