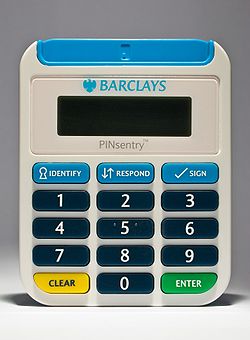 The Chip Authentication Program (CAP) is a MasterCard initiative and technical specification for using EMV banking smartcards for authenticating users and transactions in online and telephone banking. It was also adopted by Visa as Dynamic Passcode Authentication (DPA).[1] The CAP specification defines a handheld device ("CAP reader") with a smartcard slot, a decimal keypad, and a display capable of displaying at least 12 characters (e.g. a starburst display). Banking customers who have been issued a CAP reader by their bank can insert their Chip and PIN (EMV) card into the CAP reader in order to participate in one of several supported authentication protocols. CAP is a form of two-factor authentication as both a smartcard and a valid PIN must be present for a transaction to succeed. Banks hope that the system will reduce the risk of unsuspecting customers entering their details into fraudulent websites after reading ‘phishing’ emails.[2]

The CAP specification supports several authentication methods. The user first inserts their smartcard into the CAP reader and enables it by entering the PIN. A button is then pressed to select the transaction type. Most readers have 2 or 3 transaction types available to the user under a variety of names. Some known implementations are:

The above noted transaction types are implemented using one of two modes. One of these modes has two forms in which it can operate, creating three distinct modes, though they are not named this way in the specification. 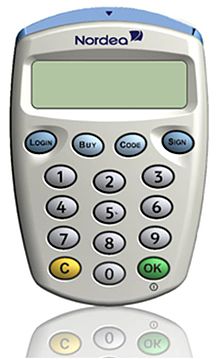 In all three modes, the CAP reader asks the EMV card to output a data packet that confirms the cancellation of a fictitious EMV payment transaction, which involves the details entered by the user. This confirmation message contains a message authentication code (typically CBC-MAC/Triple DES) that is generated with the help of a card-specific secret key stored securely in the smartcard. Such cancellation messages pose no security risk to the regular EMV payment application, but can be cryptographically verified and are generated by an EMV card only after the correct PIN has been entered. It provided the CAP designers a way to create strong cryptographic evidence that a PIN-activated EMV card is present and has seen some given input data, without having to add any new software functions to already fielded EMV cards.

An EMV smartcard contains a (typically 16-bit) transaction counter that is incremented with each payment or CAP transaction. The response displayed by a CAP reader essentially consists of the various parts of the card's response (Application Transaction Counter, MAC etc) which is then reduced to specific bits as determined by the Issuer Authentication Indicator record stored in the card (this is set on a per-issuer basis, although should an issuer desire, it could be set randomly for each card providing a database of each card's IAI is kept), finally, after unwanted bits are discarded (essentially the absolute position of bits is irrelevant, a bit in the IAI that is 0 means the corresponding bit in the card response will be dropped rather than merely being set to 0). Finally the value is converted from binary into a decimal number and displayed to the user. A truncated example is provided below:

In the identify mode, the response depends only on the required bits from the IAI as the amount and reference number are set to zero - this also means that selecting respond and entering a number of "00000000" will in fact generate a valid identify response. More concerningly however, if a respond request is issued by a bank, using the sign mode with the same number and an amount of "0.00" will again generate a valid result which creates a possibility for a fraudster to instruct a customer to do a "test" challenge response for an amount of £0.00 which is in fact going to be used by the fraudster to verify a respond command in order for them to add themselves as a payee on the victim's account - currently this attack is only possible with the Gemalto-made EZIO CAP devices (Barclays PINsentry) as the Xiring-made devices will not proceed until an amount of at least 0.01 is entered. Similarly of course; a bank that implements the identify command makes it possible for a fraudster to request a victim to do a "test" respond transaction using 00000000 as the reference, and will then be able to successfully login to the victim's account.

The same on-card PIN retry counter is used as in EMV transactions. So just like at an ATM or POS terminal, entering an incorrect PIN three times in a row into a CAP reader will block the card.

The original CAP specification was designed to use normal EMV transactions, such that the CAP application could be deployed without updating the firmware of existing EMV cards if necessary. The preferred implementation uses a separate application for CAP transactions. The two applications may share certain data, such as PIN, while other data is not shared in instances where it is only applicable to one application (i.e. terminal risk management data for EMV) or advantages to have separate (i.e. transaction counter, so that EMV and CAP transactions increment separate counters which can be verified more accurately). The reader also carries implementation specific data, some of which may be overridden by values in the card. Therefore, CAP readers are generally not compatible with cards from differing issuing banks.

Cambridge University researchers Saar Drimer, Steven Murdoch, Ross Anderson conducted research [3] into the implementation of CAP, outlining a number of vulnerabilities in the protocol and the UK variant of both readers and cards. Numerous weaknesses were found.