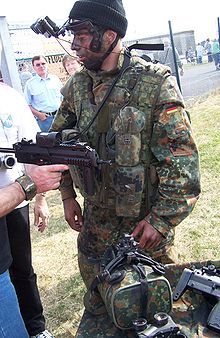 A German Army soldier with a "LUCIE" night vision.

A night vision device (NVD) is an optical instrument that allows images to be produced in levels of light approaching total darkness. They are most often used by the military and law enforcement agencies, but are available to civilian users. The term usually refers to a complete unit, including an image intensifier tube, a protective and generally water-resistant housing, and some type of mounting system. Many NVDs also include sacrificial lenses,[1] IR illuminators, and telescopic lenses.

Night vision devices were first used in World War II, and came into wide use during the Vietnam War.[2][3] The technology has evolved greatly since their introduction, leading to several "generations" of night vision equipment with performance increasing and price decreasing. Another term is "night optical device" or NOD.

The classification below was initially introduced by the US manufacturers through the US government. European manufacturers do not abide by it.

The first practical commercial night vision device offered on the market was developed by Dr. Vladimir K. Zworykin working for the Radio Corporation of America[4] and was intended for civilian use. At that time infra-red was commonly called black light, a term later restricted to Ultraviolet. It was not a success due to its size and cost. [5] The first military night vision device were introduced by the German army as early as 1939. The first devices were being developed by AEG starting in 1935. By the end of World War II, the German army had equipped approximately 50 Panther tanks, which saw combat on both the Eastern and Western Fronts. The "Vampir" man-portable system for infantrymen was being used with Sturmgewehr 44 assault rifles.[6] Parallel development of night vision systems occurred in the USA. The M1 and M3 infrared night sighting devices, also known as the "sniperscope" or "snooperscope", were introduced by the US Army in World War II, and also used in the Korean War, to assist snipers.[2] They were active devices, using a large infrared light source to illuminate targets. Their image intensifier tubes function using an anode and an S-1 photocathode, made primarily of silver, caesium, and oxygen and a electrostatic inversion with electron acceleration were used to achieve gain .[7]

An M16A1 rifle fitted with the AN/PVS-2 Starlight scope.

First generation passive devices, introduced during the Vietnam War, were an adaptation of earlier active GEN 0 technology, and rely on ambient light instead of an infrared light source. Using an S-20 photocathode, their image intensifiers produce a light amplification of around 1,000×,[8] but are quite bulky and require moonlight to function properly.

Second generation devices feature an improved image-intensifier tube utilizing micro-channel plate (MCP)[9] with an S-25 photocathode,[7] resulting in a much brighter image, especially around the edges of the lens. This leads to increased illumination in low ambient light environments, such as moonless nights. Light amplification is around 20,000×.[8] Also improved were image resolution and reliability.

An early development version of the AN/PVS-7 goggle.

Third generation night vision systems maintain the MCP from Gen II, but now use a photocathode made with gallium arsenide, which further improves image resolution. In addition, the MCP is coated with an ion barrier film for increased tube life. The light amplification is also improved to around 30,000–50,000×.[8]

US Army Night Vision and Electronic Sensors Directorate (NVESD) is part of the governing body that dictates the name of the generation of night vision technologies. Although the recent increased performance associated with the GEN-III OMNI-VII components is impressive, the US Army has not yet authorized the use of the name GEN-IV for these components.

GEN-III OMNI-VII devices can differ from standard Generation 3 in two important ways. First, an automatic gated power supply system regulates the photocathode voltage, allowing the NVD to instantaneously adapt to changing light conditions.[19] The second is a removed or greatly thinned ion barrier, which decreases the amount of electrons that are usually rejected by the Standard GEN III MCP, hence resulting in less image noise and the ability to operate with a luminous sensitivity at 2,850 K of only 700, compared to operating with a luminous sensitivity of at least 1,800 for GEN III image intensifiers.[20] The disadvantage to a thin or removed ion barrier is the overall decrease in tube life from a theoretical 20,000 hrs mean time to failure (MTTF) for Gen III type, to 15,000 hrs MTTF for GEN IV type. However, this is largely negated by the low numbers of image intensifier tubes that reach 15,000 hrs of operation before replacement.

A cut-open and depotted AN/PVS-5 showing the components of a night vision device. This device was manufactured in 2nd Generation (5A to 5C) and 3rd Generation (5D)

It is important to note that while the consumer market classifies this type of system as Generation 4, the United States military describes these systems as Generation 3 Autogated tubes (GEN-III OMNI-VII). Moreover, as autogating power supplies can now be added to any previous generation of night vision, "autogating" capability does not automatically class the devices as a GEN-III OMNI-VII, as seen with the XD-4. Another point to note is that any postnominals appearing after a Generation type (i.e., Gen II +, Gen III +) do not change the generation type of the device, but instead indicates an advancement(s) over the original specification's requirements.[21]

Though image intensification technology employed by different manufacturers varies, from the tactical point of view night vision system is an optical device that enables vision at low light. The US government itself has recognized the fact that technology itself makes little difference as long as an operator can see clearly at night. Consequently the United States bases export regulations not on the generations, but on a calculated factor called figure of merit (FOM). The method of FOM calculation and its implications for export are briefly described in a National Defense University document called “The NATO Response Force”[23] authored by Jeffrey P. Bialos, the Executive Director of the Transatlantic Security and Industry Program at the Johns Hopkins University and Stuart L. Koehl, a Fellow at the Center for Transatlantic Relations of the same university.

… beginning in 2001, the U.S. implemented a new figure of merit (FOM) system for determining the release of night vision technology. FOM is an abstract measure of image tube performance, derived from the number of line pairs per millimeter multiplied by the tube's signal-to-noise ratio.

US-made tubes with a FOM greater than 1,400 are not exportable outside the US.

The United States Air Force is experimenting with panoramic night vision goggles (PNVGs) which double the user's field of view to around 95 degrees by using four 16 mm image intensifier tubes, rather than the more standard two 18 mm tubes. They are in service with A-10 Thunderbolt II, MC-130 Combat Talon and AC-130U Spooky aircrew.[24]

Certain countries (e.g. Hungary and other European Union members) regulate possession and or use of night-vision devices. German law forbids such devices if their purpose is to be mounted on firearms.[27] Citizen's access to Gen 2 and up is outlawed by adopting International Traffic in Arms Regulations into national legislation.[citation needed][dubious – discuss] Generation 2 and higher devices are classified as military/law enforcement purpose and espionage tools.[dubious – discuss] In Iceland, the use of night-vision devices for hunting is prohibited, while there are no restrictions on the devices themselves.

New Zealand rescue helicopter services use several sets of 3rd-generation night vision goggles imported from the USA, and the country is required to restrict access to the equipment to comply with the strict regulations regarding their export.[28] There are no prohibitions on the ownership or use of night vision equipment for shooting non-indigenous game animals, such as rabbits, hares, deer, pigs, tahr, chamois, goats, wallabies, etc.

Most U.S. states have no such bans. In California it is a misdemeanor to possess a device "designed for or adaptable to use on a firearm which, through the use of a projected infrared light source and electronic telescope, enables the operator thereof to visually determine and locate the presence of objects during the nighttime.".[29] This essentially covers scopes using Gen0 technology, but not the subsequent generations. There was an effort in 1995[30] to further expand restrictions to forbid night vision devices that did not incorporate a light source, but it did not become law.