An optical instrument either processes light waves to enhance an image for viewing, or analyzes light waves (or photons) to determine one of a number of characteristic properties. 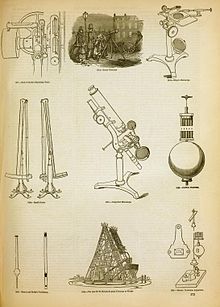 An illustration of some of the optical devices available for laboratory work in England in 1858.
Further information: Viewing instrument

The first optical instruments were telescopes used for magnification of distant images, and microscopes used for magnifying very tiny images. Since the days of Galileo and Van Leeuwenhoek, these instruments have been greatly improved and extended into other portions of the electromagnetic spectrum. The binocular device is a generally compact instrument for both eyes designed for mobile use. A camera could be considered a type of optical instrument, with the pinhole camera and camera obscura being very simple examples of such devices.

Another class of optical instrument is used to analyze the properties of light or optical materials. They include:

DNA sequencers can be considered optical instruments as they analyse the color and intensity of the light emitted by a fluorochrome attached to a specific nucleotide of a DNA strand.