Spectrometer
This article is about Spectrometers. For the spectral density measuring instrument, see Spectrogram.

A spectrometer (spectrophotometer, spectrograph or spectroscope) is an instrument used to measure properties of light over a specific portion of the electromagnetic spectrum, typically used in spectroscopic analysis to identify materials. The variable measured is most often the light's intensity but could also, for instance, be the polarization state. The independent variable is usually the wavelength of the light or a unit directly proportional to the photon energy, such as wavenumber or electron volts, which has a reciprocal relationship to wavelength. A spectrometer is used in spectroscopy for producing spectral lines and measuring their wavelengths and intensities. Spectrometer is a term that is applied to instruments that operate over a very wide range of wavelengths, from gamma rays and X-rays into the far infrared. If the instrument is designed to measure the spectrum in absolute units rather than relative units, then it is typically called a spectrophotometer. The majority of spectrophotomers are used in spectral regions near the visible spectrum.

In general, any particular instrument will operate over a small portion of this total range because of the different techniques used to measure different portions of the spectrum. Below optical frequencies (that is, at microwave and radio frequencies), the spectrum analyzer is a closely related electronic device. 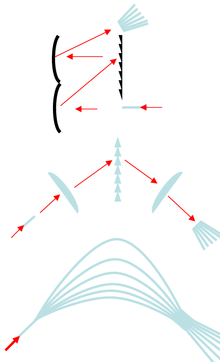 Spectroscopes are often used in astronomy and some branches of chemistry. Early spectroscopes were simply prisms with graduations marking wavelengths of light. Modern spectroscopes generally use a diffraction grating, a movable slit, and some kind of photodetector, all automated and controlled by a computer. The spectroscope was invented in 1819 by Joseph von Fraunhofer.[citation needed] Gustav Robert Kirchhoff and Robert Bunsen invented a spectroscope in 1859 that enabled the discovery of caesium and rubidium.[1][2] Kirchoff and Bunsen also explained the origin of Fraunhofer lines.[citation needed]

When a material is heated to incandescence it emits light that is characteristic of the atomic makeup of the material. Particular light frequencies give rise to sharply defined bands on the scale which can be thought of as fingerprints. For example, the element sodium has a very characteristic double yellow band known as the Sodium D-lines at 588.9950 and 589.5924 nanometers, the color of which will be familiar to anyone who has seen a low pressure sodium vapor lamp.

In the original spectroscope design in the early 19th century, light entered a slit and a collimating lens transformed the light into a thin beam of parallel rays. The light then passed through a prism (in hand-held spectroscopes, usually an Amici prism) that refracted the beam into a spectrum because different wavelengths were refracted different amounts due to dispersion. This image was then viewed through a tube with a scale that was transposed upon the spectral image, enabling its direct measurement.

With the development of photographic film, the more accurate spectrograph was created. It was based on the same principle as the spectroscope, but it had a camera in place of the viewing tube. In recent years the electronic circuits built around the photomultiplier tube have replaced the camera, allowing real-time spectrographic analysis with far greater accuracy. Arrays of photosensors are also used in place of film in spectrographic systems. Such spectral analysis, or spectroscopy, has become an important scientific tool for analyzing the composition of unknown material and for studying astronomical phenomena and testing astronomical theories.

In modern spectrographs in the UV, visible, and near-IR spectral ranges, the spectrum is generally given in the form of photon number per unit wavelength (nm or μm), wavenumber (μm−1, cm−1), frequency (THz), or energy (eV), with the units indicated by the abscissa. In the mid- to far-IR, spectra are typically expressed in units of Watts per unit wavelength (μm) or wavenumber (cm−1). In many cases, the spectrum is displayed with the units left implied (such as "digital counts" per spectral channel).

A comparison of the four abscissa types typically used for visible spectrometers.

A comparison of the four abscissa types typically used for infrared spectrometers. 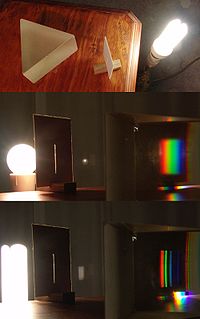 A very simple spectroscope based on a prism

A spectrograph is an instrument that separates an incoming wave into a frequency spectrum. There are several kinds of machines referred to as spectrographs, depending on the precise nature of the waves. The first spectrographs used photographic paper as the detector. The star spectral classification and discovery of the main sequence, Hubble's law and the Hubble sequence were all made with spectrographs that used photographic paper. The plant pigment phytochrome was discovered using a spectrograph that used living plants as the detector. More recent spectrographs use electronic detectors, such as CCDs which can be used for both visible and UV light. The exact choice of detector depends on the wavelengths of light to be recorded.

An echelle spectrograph uses two diffraction gratings, rotated 90 degrees with respect to each other and placed close to one another. Therefore an entrance point and not a slit is used and a 2d CCD-chip records the spectrum. Usually one would guess to retrieve a spectrum on the diagonal, but when both gratings have a wide spacing and one is blazed so that only the first order is visible and the other is blazed that a lot of higher orders are visible, one gets a very fine spectrum nicely folded onto a small common CCD-chip. The small chip also means that the collimating optics need not to be optimized for coma or astigmatism, but the spherical aberration can be set to zero.

A spectrograph is sometimes called polychromator, as an analogy to monochromator.

Spectrometer at the Open Directory Project