The Pittsburgh and Lake Erie Railroad (P&LE) (reporting mark PLE), also known as the "Little Giant", was formed on May 11, 1875. Company headquarters were located in Pittsburgh, Pennsylvania. The line connected Pittsburgh in the east with Youngstown, Ohio at nearby Haselton, Ohio in the west and Connellsville, Pennsylvania to the east. It did not reach Lake Erie (at Ashtabula, Ohio) until the formation of Conrail in 1976. The P&LE was known as the "Little Giant" due to the amount of tonnage that it moved was dramatically out of proportion to its actual number of route miles. While it operated around one tenth of one percent of the nation's railroad miles, it hauled around one percent of its tonnage. This was largely because the P&LE served the steel mills of the greater Pittsburgh area, which consumed and shipped vast amounts of material. It was a specialized railroad deriving much of its revenue from coal, coke, iron ore, limestone, and steel. The eventual closure of the steel mills led to the end of the existence of the P&LE as an independent line in 1992.

The P&LE purchased many smaller railroads that operated in the areas of its main train line extending the line north to Youngstown and south to Connellsvile . This provided a means of transportation from the steel centers of Pittsburgh to the Great Lakes and St. Lawrence Seaway area.

The original line ran between Youngstown, Ohio (at Haselton) and 24th Street in Pittsburgh, Pennsylvania near the Jones and Laughlin Iron Works, opened in 1879. The P&LE's passenger terminal in Pittsburgh was on the south bank of the Monongahela River, at the foot of the Smithfield Street Bridge.

The P&LE followed the left downstream bank of the Monongahela River past the terminal to the Golden Triangle, where that waterway meets the Allegheny River and becomes the Ohio River. The railroad continued northwest along the left downstream bank of the Ohio to the vicinity of Beaver, Pennsylvania, where it crossed the river on the Beaver Bridge. From there it followed the Beaver River to just south of New Castle, Pennsylvania, where it then followed the Mahoning River west-northwest, crossing into Ohio just east of Lowellville. From there it ran northwest into Youngstown, terminating at a junction with the New York Central known as Haselton.

Please note that in the table below, mileage is reckoned westbound from the P&LE Terminal in Pittsburgh. The original line continued east past that station for a little over two miles (listed in Youghiogheny Branch table below) to near 24th Street in the South Side neighborhood of Pittsburgh, where it met the Monongahela Connecting Railroad and the Pittsburgh, McKeesport & Youghiogheny (PM&Y).

Please note that mileage on this P&LE branch was reckoned from the passenger terminal back at the Smithfield Street Bridge.

], a prominent Pittsburgh businessman, merchant, and railroad builder. McCreery had suffered at the hands of Pennsylvania Railroad in a business that had a loss or failed. The Pennsylvania Railroad at the time used discriminatory rates which became a hot issue in Pittsburgh. On May 11, 1870 McCreery and ten other people filed Articles of Association with Pennsylvania Secretary of State. The stated length of the railroad was for 57 miles (92 km). After 2 years the starting group was not very successful at raising the required funds and in 1877 many of the directors were succeeded by a new group of Pittsburgh businessmen. The new group was James I Bennett, David Hostetter, James M. Baily, Mark W. Watson, and James M. Schoonmaker, all influential. In the spring of 1877, the first rails were laid down in Beaver Falls, which had the largest population other than Pittsburgh. The other reason for this was around February 1877 Jacob Henrici of the Harmony Society had business there. Henrici would also become a director in 1877. On July 6, 1877, McCreery resigned and Bennett was elected to president with Jacob Henrici becoming a director. Henrici was the key due to his Harmony Society ties which was a communal religious group founded in 1805. In 1880, William Henry Vanderbilt's Lake Shore and Michigan Southern Railway bought stock to the tune of $200,000 in the P&LE. The P&LE would stay in the Vanderbilt's system until Conrail. Also in 1877, an agreement between the P&LE and the Atlantic & Great Western (Erie) and the Lake Shore and Michigan Southern Railway was reached for routing traffic at Youngstown Ohio. The final track laying between Pittsburgh and Youngstown was on January 27, 1879. At the opening in 1879, the P&LE was a poorly-built, single track line. Fortunately for the railroad it was an immediate success and money was soon available for improvements.

In 1881, the P&LE became linked with the notorious South Pennsylvania Railroad (South Penn). This would lead to William Henry Vanderbilt to control of the P&LE as a link in the South Penn and the building of the Pittsburgh, McKeesport and Youghiogheny Railroad. Vanderbilt did this by buying Henry W. Oliver's and the Harmony Society's stock in the P&LE. Then Vanderbilt, aided by Andrew Carnegie, advanced the PM&Y all of the funds to build to Connellsville, Pennsylvania and then lease it to the P&LE for 99 years. The PM&Y in the end was the only part of the South Penn that was built, but it would be an important part of the P&LE. The PM&Y opened in 1883 and leased to the P&LE in 1884. Concurrently in 1883, to get the P&LE ready for the expected new business due to the South Penn linkage, the McKees Rocks shops were built.

Vanderbilt and the "Little Giant"

The company came under more formal control in the 1887 by the New York Central Railroad. Lake Shore and Michigan Southern Railway's president, John Newell, took over as president of the P&LE in 1887. Under Newell, Reed and Colonel Schoonmaker; the P&LE would become the "Little Giant". From 1887 to 1927, the P&LE would became a heavy duty railroad, with double track all the way from Pittsburgh to Youngstown. The P&LE operated as an independent subsidiary, even after New York Central and Pennsylvania Railroad merged to form Penn Central.

PM&Y and the Monongahela Railway

The making of coke in Connellsville had been a big part of P&LE traffic, but by the early 1900s it had lessened. The development of by-products distillation processing of coke had moved to the Pittsburgh area. The P&LE then extended up the Monongahela River to Brownsville, Pennsylvania in 1901. The Pennsylvania Railroad at the same time had extended to Brownsville. Both the PRR and the P&LE had plans to extend even further up the river into West Virginia coke fields. Most likely due to the South Penn, after they decided to work together by using the Monongahela Railway. The Monongahela Railway then was extended south to Martin, Pennsylvania reaching the Kondike Coke fields. Later in 1915 it reached Fairmont, West Virginia.

When Conrail was formed, the Pittsburgh and Lake Erie Railroad again became an independent Road because P&LE was owed $15.2 million by Penn Central, and operated as such until its merger into CSX.

Starting in 1934, the B&O bought trackage rights over P&LE from McKeesport to New Castle. The B&O's route through Pittsburgh had excessive grades and curves. In the last years of the P&LE, CSX used the line more than P&LE leading to the merger. Most of the online customers had long been gone, with only the main line still intact. In 1992 the company was taken over by CSX Transportation. The CSX designated the P&LE as a new subsidiary, the Three Rivers Railway. However, in 1993, CSX leased the TRR, and there is currently no de facto distinction between the former P&LE and any other portion of CSX's system. 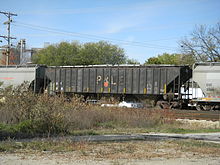 P&LE hopper with CRANDIC markings on the CRANDIC at Cedar Rapids, Iowa. Note ACI plate on the car.

Presidents of the railroad were as follows:

With Nash the active management went back to the president. 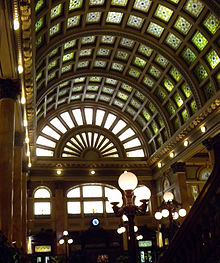 The P&LE's Pittsburgh Terminal can be seen in the lower right. Pittsburgh Terminal was the Station/headquarters, train shed and freight houses. In the photo the long train shed is along the river leading to the tall building which is the station/headquarters with the roof of the freight house to the right of the train shed. The headquarters at the bottom of the Monongahela Incline in Pittsburgh has been converted into a shopping center, Station Square. The passenger station has been placed on a list of historic edifices, spruced up and converted to a restaurant.

The Youngstown Gateway Yard was a major hub location on the railroad, until the creation of Conrail. Gateway Yard was opened in October of 1957, to be a modern hump yard. The yard was approximately 200 acres (0.81 km2) stretching for a distance of just over 5 miles (8.0 km) from Lowellville, Ohio to Center Street in Youngstown, Ohio. Gateway Yard was made up of three principal yards, and an assortment of smaller, special purpose yards. The principal yards were arranged linearly, with the eastern limits of the Departure Yard in Lowellville. The Hump Yard was located in Struthers in the center of the facility, and the Receiving Yard was to the west. The special purpose yards were "Diesel Servicing Facilities", "Gorilla Park" and "Interchange" yards. The "Interchange" yard was made up of six tracks, four were for interchange to and from the B&O Railroad and two of which were for general use. The other interchange with was with New York Central Railroad which was a direct interchange. The western yard limit was the end of track for the P&LE. Beyond the western end of the Yard was the NYC mainline that continued to Ashtabula, Ohio. The yard was constructed when the P&LE was under the control of the New York Central Railroad. Conrail routing most of the traffic around P&LE facilities in the area. After the 1993 CSX take over of P&LE, Gateway Yard was closed and most tracks have been removed. The yard tower still stands but has been heavily vandilized. The Gateway Yard Tower November 2008

Pittsburgh and Lake Erie Railroad Locomotive Shops, built in 1903, at the end of Linden Avenue in McKees Rocks, Pennsylvania

The McKees Rocks Yard facility was home to a yard, Major Locomotive Rebuilding and general maintenance, as well as Freight Car Repair and Maintenance. On the Western most end of the McKees Rocks yard, the P&LE interchanged with the PC&Y. However the PC&Y facilities are just behind the P&LE Locomotive facilities in the main yard, and trackage from the PC&Y crosses the P&LE Mainline at this point, servicing several local businesses in the Bottoms section of McKees Rocks, finally making the previously mentioned interchange. Most of the McKees Rocks facilities are still in place being used by various Freight Car rebuilding companies. The Locomotive Facility still has the PITTSBURGH AND LAKE ERIE LOCOMOTIVE SHOPS sign proudly displayed on its side, and if you look close enough, you can see where the old New York Central Ovals were.

In 1904, P&LE built the O'Donovan Bridge for easier automobile access from Island Avenue to The Bottoms without crossing the railroad tracks. This was replaced in 1931 by the McKees Rocks Bridge, which extended to Ohio River Blvd. but still provided access to The Bottoms via Helen Street exit.

The McKees Rocks Community Development Corporation has plans to adaptively reuse the building.

The College Hill neighborhood of Beaver Falls had a small yard located just below Geneva College along the Beaver River. There was also a small roundhouse on the property, plus the College Hill Station. Today, only the station remains.