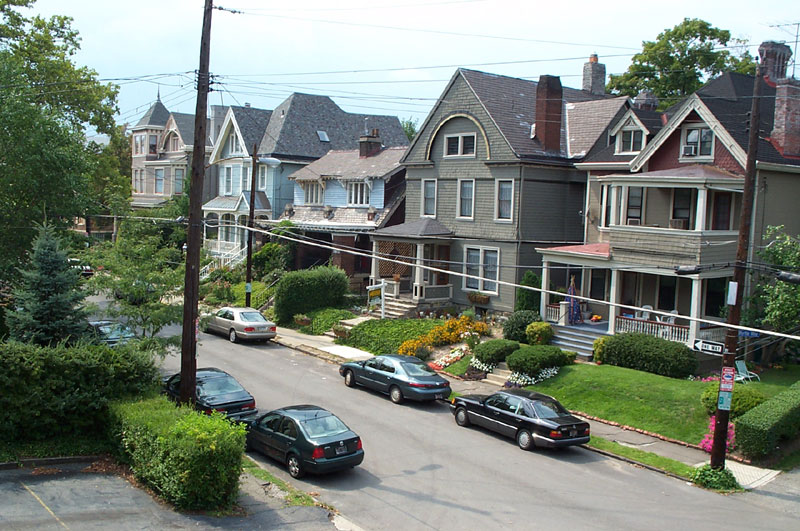 Shadyside is a in the East End of Pittsburgh, , . It has zip codes of both 15232 and 15206, and has representation on Pittsburgh City Council by the council member for District 8 (East Central Neighborhoods). The moniker Shadyside is drawn from the 19th century Pennsylvania Railroad station in the area, named for its unique shady lanes.

Shadyside is home to many of the more upscale stores and boutiques in Pittsburgh including , Coach,, and . The Shadyside Market, owned by the Mineo family for more than 50 years, features fresh produce, an on-site butcher, and a deli which is frequently packed by locals. Stores are located in two corridors; one centers on Ellsworth Avenue, the other on Walnut Street. Walnut has more stores that belong to national chains, including Gap (along with BabyGap, GapKids and GapBody), Apple, , , , , , Coach and . Local restaurants include Jitters, Cappy's, Doc's, William Penn Tavern, and Pamela's.

Ellsworth tends to have smaller locally owned businesses, including Eons (a vintage store), Gallerie Chiz (an art gallery, and beauty salons such as 5804, Capristo salon and Mikel's. Ellsworth has a number of restaurants such as The Elbow Room, Bites and Brews, and Soba. Ellsworth also features two of Pittsburghs' gay and gay friendly bars, Spin and [http://www.5801.us/ 5801] , formerly known as New York, New York. Shadyside also features boutique Inns and Hotels like [http://www.shadysideinn.com Shadyside Inn Suites] , [http://www.theinnsonnegley.com The Inns On Negley] , and [http://www.sunnyledge.com Sunnyledge]

Shadyside is also home to the , as well as on Fifth Avenue, Pittsburgh's only all-girl &ndash;12. Another neighborhood institution is Shadyside Hospital, a member of the . Additionally, and are located just across the northern edge of the neighborhood in .

The Jam on Walnut is a summer concert series that features local and regional music concerts. The concerts are held on the last Saturday of each summer month on the corner of Bellafonte and Walnut Street. Proceeds from beer sales go to Cystic Fibrosis.

Since the 1920s, residential Shadyside has been home to a mix of affluent families, young professionals, artists, students, and apartment dwellers. The residential areas of the neighborhood include well-maintained Victorian mansions along with modern apartments and condominiums. The neighborhood has a compact layout, which prevents most houses from having garages. Public transportation is available via Port Authority bus system; a busway stop is conveniently located in the neighborhood on Negley Avenue between Ellsworth and Centre avenues.