The 1988 and 2000 races were USA Olympic Trials for women and men, that were held separately from the regular event although both were held over the same course.

Runners in the 2011 Marathon traverse Baum Boulevard in Friendship.

In the past, the course wound through the hilly topography of the city and usually started at the intersection of Butler Street and Baker Street (although it was later changed on several occasions to different starting locations), and ended at Point State Park in Downtown Pittsburgh. As of 2009, however, the race begins on Smallman Street and ends at the David Lawrence Convention Center. Numerous other Pittsburgh neighborhoods are along the route, including the South Side, Oakland, Shadyside, East Liberty, Highland Park, Bloomfield, Lawrenceville, the Strip District, and the North Shore. 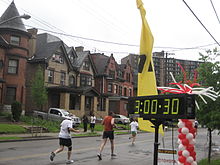