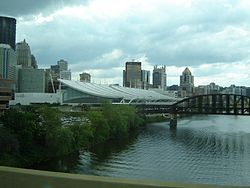 The exhibit halls, seen from the Veterans Bridge.

The David L. Lawrence Convention Center (DLLCC) is a 1,500,000-square-foot (140,000 m2) convention, conference and exhibition building in downtown Pittsburgh in the U.S. commonwealth of Pennsylvania. The initial David L. Lawrence Convention Center was completed on the site on February 7, 1981, but as part as a renewal plan the new completely redesigned center was opened in 2003 and funded in conjunction with nearby Heinz Field and PNC Park. It sits on the southern shoreline of the Allegheny River. It is the first LEED-certified convention center in North America and one of the first in the world.[1] It is owned by the Sports & Exhibition Authority of Pittsburgh and Allegheny County[2]

Rafael Viñoly Architects, P.C. was chosen as the designer for the modern center on February 28, 1999. Viñoly along with Dewhurst MacFarlane & Partners and Goldreich Engineering P.C. constructed the $354 million riverfront landmark to contain 313,400 sq ft (29,100 m2) of exhibit space (236,900 sq ft (22,000 m2) of which is column-free), 76,500 sq ft (7,100 m2) of additional exhibit space, a 31,610 sq ft (2,940 m2) ballroom, 51 meeting rooms, two 250-seat lecture halls, teleconference and telecommunications capabilities and 4,500 sq ft (420 m2) of retail space (currently in development). The architect, Viñoly, began the design with a goal in mind of achieving the status of a "green" building. In 2003, the building was awarded Gold Leadership in Energy and Environmental Design (LEED) certification by the U.S. Green Building Council, making it the first such convention center in the U.S. and the largest "green" building in the world.[1]

The current building replaced the former convention center of the same name that was constructed in 1981. The old convention center was 131,000 sq ft (12,000 m2). and lacked a ballroom. All of the old building was demolished to make way for the current structure which was built on the same site.

The building won the 2004 Supreme Award for structural engineering excellence from the Institution of Structural Engineers.

The center—though completely a structure of 2003 construction—chose to retain the name of the earlier convention center on the site completed in 1981 in honor of David Leo Lawrence (June 18, 1889—November 21, 1966). Lawrence was an American politician who served as the Democratic Governor of Pennsylvania from 1959 to 1963, only retiring because of the state's then term limit of 1 per governor. He is to date the only mayor of Pittsburgh to be elected Governor of Pennsylvania. Previously, he had been the longest tenured mayor of Pittsburgh (serving from 1946 through 1959) and the primary force behind Pittsburgh's urban renewal projects including the Mellon Arena, Gateway Center, Fort Pitt Tunnel and Point State Park. He was Pennsylvania's first Catholic Governor (at the time a major breakthrough for an Irish Catholic), and a major force in the national Democratic Party from the 1930s to the 1960s. Historians credit him with among other behind-the-scenes labors, leading a compromise at the 1944 National Democratic Convention that eventually made Harry Truman president. As well as healing a divided national convention of 1960 that resulted in the John F. Kennedy/Lyndon B. Johnson ticket, it is for these reasons as well as his work in the state and the city that he was dubbed "kingmaker" by party leaders.

On Tuesday, February 12, 2002, less than two weeks before its scheduled opening,[3] a 165-ton truss that was under construction collapsed, killing one man and injuring two other workers.[4] The truss was part of the second phase of construction, scheduled for opening in 2003, and therefore did not delay the February 23 opening of phase one.

On February 5, 2007, a section of concrete floor from the second floor loading dock collapsed under the weight of a tractor-trailer and fell onto the water feature area below.[5] There were no injuries. The building remained closed until investigations by the contractors were completed on March 9, the fault was repaired, and the convention center reopened.