Pennsylvania-Reading Seashore Lines was a railroad that operated in southern New Jersey in the 20th century. It was created as a joint venture of the Pennsylvania Railroad (PRR) and the Reading Company (RDG).

In the early 20th century, Atlantic City and the South Jersey seashore were major seaside vacation destinations for the Philadelphia area for both wealthy and working class alike. The popularity of South Jersey's seashore was made possible by rail transport providing inexpensive and fast service between the cities and towns where people lived, and the seashore where they played.[1]

There were two competing railroad companies connecting Camden (and by ferry to Philadelphia), with the resorts of Southern New Jersey seashore.[2] Competition was fierce and by its height in the 1920s competition between the West Jersey and Seashore Railroad (WJ&S, owned by the Pennsylvania) and the Atlantic City Railroad (owned by the Reading) was so keen that at one time both lines boasted some of the fastest trains in the world.[1] Trains often raced one another so as to be the first to arrive at their destination. Racing was encouraged by the fact that in many areas, the two lines were only several hundred feet apart. On the Cape May lines, the trains were in sight of each other for 11 miles between Cape May Court House and Cape May. Over the last 5 miles into Cape May, the tracks were only 50 feet apart.

On July 1, 1926, the Benjamin Franklin Bridge opened.[3] It was originally called Delaware River Bridge, and spanned the Delaware River, connecting Philadelphia and Camden.[3] Car, truck and bus usage increased as the State of New Jersey built roads in the 1920s and 30s next to the railroads going from Camden to the shore, cutting into profits.[2] 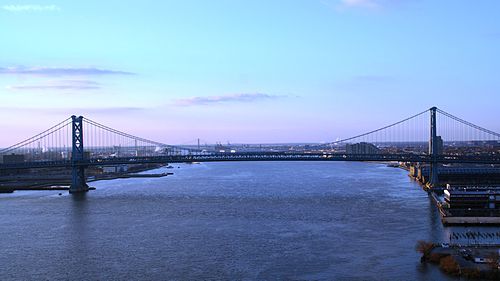 On March 4, 1931, New Jersey's public utility regulators ordered the two companies to join their southern New Jersey lines into one company, The Consolidation Agreement had decreed that the Pennsylvania Railroad had two-thirds ownership, and the Reading Company had one-third ownership.[3] But the post-war rise of the automobile and the Atlantic City Expressway built in the 1960s not only caused people to abandon the railroad for their cars, but also to abandon Atlantic City for more exotic vacation destinations. By the late 1960s, the surviving former Camden and Atlantic Main Line was reduced to a commuter service funded by the New Jersey Department of Transportation (NJDOT) running trains of Budd RDC railcars operating from a small terminal at Lindenwold PATCO station and Atlantic City.

With both of its owners bankrupt, Penn Central, (successor to the PRR) and RDG, but not the P-RSL, Conrail took over the P-RSL on April 1, 1976.[3]

Effective May 4, 1896, the Pennsylvania Railroad consolidated all of it railroads and several smaller properties in Southern New Jersey into the West Jersey and Seashore Railroad. The WJ&S had lines coming from its Federal Street Terminal in Camden.

The "Main Line" ran to Atlantic City and to other shore points via Winslow Junction, and its line via Woodbury to Millville. It was electrified with 650 volt DC third rail and overhead lines,[3] with branches going to Salem, and Deep Water Point from Woodbury, and Bridgeton from Glassboro.

While the WJ&S line via Woodbury was a pioneering example of railroad electrification, electric multiple unit (MU) service between Newfield and Atlantic City ended September 26, 1931. The PRSL only inherited the electrified Millville–Camden commuter rail service from WJ&S.[3]

Effective April 1, 1889, the Philadelphia and Reading Railway consolidated all of its railroads in Southern New Jersey into the Atlantic City Railroad (ACRR).[4]

The ACRR, a subsidiary of the Reading Company, had one line from its Kaighn's Point Terminal going to Winslow Junction with lines splitting off to Atlantic City, Ocean City, Wildwood, and Cape May.[2] Branch lines included the Gloucester Branch to Grenloch, and the Willamstown Branch from Willamstown Junction (on the Atlantic City Main) to Mullica Hill to the south, and Atco to the north.

On 15 July 1933, The WJ&S was leased by the ACRR, and changed its name to Pennsylvania-Reading Seashore Lines, as the Consolidation Agreement had decreed.[3]

The 21 steam locomotives owned by the PRSL were from the PRR subsidiary WJ&S.[3] They all consisted of PRR classes.

Before dieselization the PRSL was more apt to lease its motive power from either of its parent railroads as it completely lacked any heavy passenger locomotives (like 4-6-2 Pacifics). As its parent railroads began to replace steam with diesel locomotives the PRSL was used to let many displaced steam units run out their useful lives. Perhaps most notably, the late model Reading G3 class Pacific's were used on the Atlantic City main line commuter service in the mid 1950's.

The 0-6-0 type was assigned class B, and was used in switcher service.

The 4-4-2 "Atlantic" type was assigned class E. and was used in passenger service.

The 2-8-0 "Consolidation" type was assigned class H, and was used in freight service.

Since the Consolidation Agreement had decreed that the PRR Mechanical Department would oversee equipment policy decisions, the PRSL did not gain ownership of any ACRR-RDG locomotives.[3]

Additional locomotives were leased as needed from PRSL's parent companies, PRR and RDG.[3]

Beginning in the 1950s the PRSL purchased a rather modest fleet of its own diesel locomotives to replace its steam engines for passenger and freight services. When additional power was needed for the busy summer tourist season engines were borrowed from the parent corporations (usually the PRR) as was true previously the with steam locomotives. To further supplement its small fleet the PRSL made increasing use of run through power on certain freight trains to large customers that didn't require classification at the PRSL's Pavonia yard.

The first generation of PRSL diesel locomotives were all from the nearby Baldwin Locomotive Works, which was the vendor of choice for the parent PRR in both the steam and early diesel era.

The PRSL's diesel locomotives were almost all painted in what is commonly referred to as Brunswick Green which was so dark it seemed almost black. The paint scheme was borrowed from its Pennsylvania railroad parent and with the PRR's official name for this color being DGLE (Dark Green Locomotive Enamel). The undercarriage of the locomotives were painted in black referred to as "True Black." A few of the first diesels were delivered in a lighter Ivy Green, but were later re-painted.

By the late 1960s the original Baldwin diesels were beginning to suffer reliability problems, which was exacerbated by the fact that Baldwin had gone out of business some 10 years before and could no longer provide spare parts or maintenance. With the new powerplant being constructed at Beesley's Point ready to consume several 90 car coal trains per week the PRSL was in need of more powerful and more reliable locomotives and turned to industry-leader EMD to supply 10 new second generation diesel electric locomotives.

Also known as a Doodlebug

The P-RSL inherited the following from the WJ&S:[1][3]

Additional passenger cars were leased as needed from P-RSL's parent companies, PRR and RDG, and sometimes from the Central Railroad of New Jersey (CNJ).[3]

The PRSL did not own any of the P70’s that carried its name. They were leased from the WJ&S. The passenger cars of the P-RSL were painted Tuscan Red. This is a brick-colored shade of red.

The P-RSL owned no freight equipment.

The Main Line (Mile Post 0.0 to 57.9) 57.9 miles, is the former Camden and Atlantic line. It was the main passenger route from Camden and Philadelphia (via the Delair Bridge Line) to Atlantic City (and Cape May via Winslow Junction and the Cape May Branch).

On April 3, 1964 the P-RSL sold the right of way between Kirkwood station in Lindenwold and Camden to the Delaware River Port Authority for $2,150,000, in order to build the (PATCO) HiSpeedline. On January 14, 1966 the last train ran over the "Main Line" between Center Tower in Camden and Vernon Tower in West Haddonfield, as result of PATCO construction. On October 1, 1969, service over Delair Bridge Line between Lindenwold and the Delair Bridge was abandoned, and passengers had to change to the PATCO High Speed Line at Lindenwold. Today it is known as NJ Transit's Atlantic City Line, and features restored direct to Philadelphia service over the Delair Bridge, as well as the New York–Atlantic City Atlantic City Express Service.

The Millville Branch (Mile Post 0.0 to 41.2) is the former WJ&S, ex-West Jersey Railroad. The line runs from Camden via Woodbury and Glassboro to Millville. It was electrified during 1906 to 1949 with 650 volt DC third rail and overhead wire.

The Clementon Branch (Mile Post 2.8 to 25.9) is the former ACRR, ex-Philadelphia and Atlantic City Railway. The branch runs from Brown Tower in Camden via Clementon, New Jersey to Winslow Junction.

The Cape May Branch (Mile Post 25.9 to 80.0) 79.29 miles, is the former ACRR, ex-Seacoast Railroad. The branch runs from Winslow Junction via Tuckahoe to Cape May.

The Ocean City Branch (Mile Post 53.8 to 66.8) is the former ACRR, ex-Ocean City Railroad. The branch runs from Tuckahoe to Ocean City at 10th Street.

The Wildwood Branch (Mile Post 72.5 to 76.5) 4.06 miles, is the former ACRR, ex-Wildwood and Delaware Bay Short Line Railroad. The branch runs from Wildwood Junction to Wildwood.

The Penns Grove Branch (Mile Post 8.8 to 32.7) is the former WJ&S, ex-Delaware River Railroad. The branch runs from Woodbury to Penns Grove.

The Manumuskin Secondary Track (Mile Post 41.2 to 48.5) is part of the former WJ&S, ex-Cape May and Millville Railroad from Millville to Manumuskin.

The Leesburg Secondary Track (Mile Post 46.8 to 52.5 ) is the former WJ&S, ex-Maurice River Railroad from Manumuskin to Leesburg.

The Grenloch Secondary Track (Mile Post 2.8 to 13.4) 9.63 miles, is the former ACRR, ex-Camden, Gloucester & Mt Ephraim Railway, and Camden County Railroad. From Brown Tower in Camden to Grenloch. Its nickname is "The Peanut Line."

The Deepwater Point Secondary Track (Mile Post 29.1 to 32.7) goes from the end of the Penns Grove Branch to the Deepwater power plant located on the Delaware River.

The Salem Secondary Track (Mile Post 8.8 to 37.5) is the former WJ&S, ex-Salem Railroad from Woodbury to Salem.

The Woodbine Secondary Track (Mile Post 56.8 to 60) is a short part of the former WJ&S, ex-Cape May and Millville Railroad. From Woodbine to Woodbine Junction.

The Newfield Secondary Track (Mile Post 47.7 to 64.4) is part of the former WJ&S, ex-West Jersey and Atlantic Railroad from Mays Landing to Atlantic City. At one time it was electrified with 600 volt DC third rail.