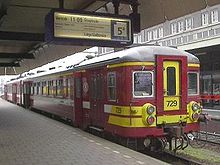 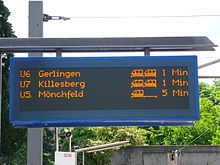 A sign at a light rail stop in Stuttgart, Germany which includes pictorial information advising passengers whether services will be formed of single or double / twin multiple-unit light rail vehicles.

The term multiple unit or MU is used to describe a self-propelled carriages capable of coupling with other units of the same or similar type and still being controlled from one driving cab. The term is commonly used to denote passenger trainsets consisting of more than one carriage. Single self-propelling carriages (also called railcars, rail motor coaches or railbuses) can be referred to as multiple units if capable of operating with other units.

Multiple-unit train control was first used in Electric Multiple Units in the 1890s. This allowed electrically-powered rapid transit trains to be operated from a single driving position. Early users of such multiple units include the Liverpool Overhead Railway (the first multiple units) and Chicago's South Side Elevated Railroad (the first units to use a low-voltage control system).

The United Kingdom and France (for example Voiture État à 2 étages) had many examples of push-pull steam trains, or autotrains and railmotors on branch lines which include at least partial control of a steam locomotive from a remote cab. These provided many of the operational benefits of a multiple unit, although none incorporated any form of electrical/electronic multiple-unit train control. 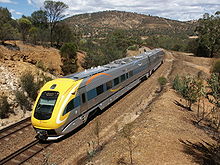 The Transwa Prospector DEMU capable of up to 200 km/h provides a passenger service between Perth, Western Australia and the mining town of Kalgoorlie

Most MUs are powered either by traction motors, receiving their power through a live rail or overhead wire (EMU), or by a diesel engine driving the wheels through a gearbox or hydraulic transmission (DMU). Diesel-electric multiple units (DEMUs) have a diesel engine that drives a generator producing electricity to drive traction motors in a similar fashion to a diesel-electric locomotive.

A multiple-unit trainset has the same power and traction components as a locomotive, but instead of the components being concentrated in one carbody, they are spread out on each car that makes up the set. In many cases these cars can only propel themselves when they are part of the set, so they are semi-permanently coupled. For example, a DMU might have one car carry the prime mover and traction motors, and another the engine for head end power generation; an EMU might have one car carry the pantograph and transformer, and another car carry the traction motors.

It is not necessary for every single car in an MU set to be motorized. Therefore MU cars can be motor units or trailer units. Instead of motors, trailing units can contain supplementary equipment such as air compressors, batteries, etc.; trailer cars may also be fitted with a driving cab.

In most cases, MU trains can only be driven/controlled from dedicated cab cars. However, in some MU trains, every car is equipped with a driving console, and other controls necessary to operate the train, therefore every car can be used as a cab car whether it is motorised or not, if on the end of the train. An example of this arrangement is the NJ Transit Arrows. 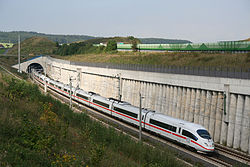 Virtually all rapid transit rolling stock, such as ones used on the New York City Subway, the London Underground, and other subway systems, are multiple-unit trainsets, usually EMUs. Most trains in the Netherlands and Japan are MUs, making them suitable for use in areas of high population density.

Many high-speed rail rolling stocks are also multiple-unit trainsets, such as the Japanese Shinkansen and the latest-generation German InterCityExpress ICE 3 high-speed trains. A new high-speed MU, the AGV, was unveiled by France's Alstom on February 5, 2008. It has a claimed service speed of 360 km/h.[1]

A new concept is to use the multiple unit idea for freight traffic, such as carrying containers or for trains used for maintenance. The Japanese M250 series train has four front and end carriages that are EMUs, and has been operating since March 2004. The German CargoSprinter have been used in three countries since 2003. 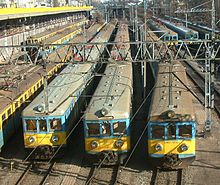 The latest example of a Swiss EMU, a Siemens Desiro, on the Zürich S-Bahn line S8

Multiple units do have some disadvantages as compared to locomotive-hauled trains:[citation needed]

The Public Transport Corporation in Melbourne ordered a prototype Double Deck Development and Demonstration train in 1991. It suffered frequent breakdowns and spent long periods out of use. It was finally withdrawn in 2002 and scrapped in 2006.[citation needed]

The concept of multiple unit has entered the horizon of the Chinese since the 6th Speed-up Campaign of China Railways in 2007.With the upgrade of Jinghu Railway,North Jingguang Railway, Jingha Railway and Hukun Railway,and the construction of new Passenger Dedicated Lines(or Passenger Railways) completed, CRH(China Railway High-speed) trains have been put into service, mainly in North and Northeast China, and East China. All these CRH trains are electric multiple units. This could be seen as the beginning of the general service of multiple unit trains in China's national railway system.

Far earlier than the birth of CRH brand, multiple unit trains have been running on all major cities' metro lines in China. 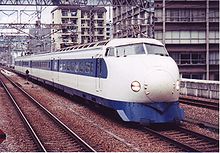 In Japan, most passenger train vehicles including the high-speed Shinkansen are multiple unit type. The few locomotive passenger trains still in use are mostly used for overnight sleeper trains and tourist-oriented trains such as the numerous steam locomotives operated infrequently on several of the more scenic lines throughout the country.

Japan is a country of high population density with a large number of railway passengers in relatively small urban areas, and frequent operation of short-distance trains has been required. Therefore, the high acceleration ability and quick turnaround times of MU have advantages, encouraging their development in this country. Additionally, the mountainous terrain gives the MU's advantage on grade more importance than in most countries, particularly in driving adoption on small private lines many of which run from coastal cities to small towns in the mountains.

Most long-distance trains in Japan had been operated by locomotives until the 1950s, but by utilizing and enhancing the technology of short-distance urban MU trains, long-distance express MU-type vehicles were developed and widely introduced starting in the mid-1950s. This work resulted in the original Bullet Train development which optimized all of the EMU's efficiencies to maximize speed. It was introduced upon completion of the Tokaido Shinkansen (literally "new line") in 1964. By the 1970s, locomotive type trains were regarded as slow and inefficient, and their use is now mostly limited to freight. Recently[when?] there have been development efforts in freight EMU technology, but it is currently only utilized for an express freight service on the Tokaido Main Line between Tokyo and Osaka; the government has been pushing for the adoption of freight EMU technology on energy efficiency grounds in the hopes that wide adoption could assist in meeting CO2 emissions targets. The effort has been principally targeted at express package shipping that would otherwise travel by road. 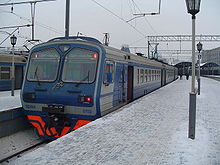 Elektrichka (Russian: электри́чка, Ukrainian: електри́чка, elektrychka) is an informal word for elektropoezd (Russian: электропо́езд), a Soviet or post-Soviet regional (mostly suburban) electrical multiple unit passenger train. Elektrichkas are widespread in Russia, Ukraine and some other countries of the former Soviet Union. The first elektrichka ride occurred in August 1929 between Moscow and Mytishchi.

In Northern Ireland the majority of passenger services have been operated by diesel multiple units since the mid-1950s under the tenure of both the Ulster Transport Authority (1948–1966) and Northern Ireland Railways (since 1967). In the UK the use of modern diesel multiple units was pioneered in Northern Ireland, although a number of other railway companies also experimented with early DMUs (including the Great Western and the London Midland Scottish). Notable examples include the Sprinter and Voyager families, and the brand new Olympic Javelin train service.

The London Underground passenger system is operated exclusively by EMUs. Work trains on the Underground employ separate locomotives, some of which are dual battery/live rail powered.

Most long-distance trains in North America are locomotive-hauled and use a process called Multi-Unit control to control multiple locomotives, this does not make these locomotives MUs. However, commuters, rapid transit, and light rail operations make extensive use of MUs. Most electrically powered trains are MUs. The Southeastern Pennsylvania Transportation Authority (SEPTA) Regional Rail Division uses EMUs almost exclusively — the exception being some of its peak express service. New Jersey Transit service on the Northeast Corridor Line is split between electric locomotives and EMUs.

M2, M4, M6 and M8 EMUs which operate on the New Haven Line of Metro-North Railroad, are “multi-system” meaning they can draw power from either the third rail or from overhead lines. This allows operation under the wires between Pelham, NY and New Haven, CT, a section of track owned by Metro North but shared with Amtrak's Northeast Corridor service, and on third rail between Pelham and Grand Central Terminal. EMUs are used on AMT's Montreal/Deux-Montagnes line.

DMUs are less common, partly because new light rail operations are almost entirely electric, with many commuter routes already electrified, and also because of the difficulties posed by Federal Railway Administration rules limiting their use on shared passenger/freight corridors. When the Budd RDC was developed following World War II, it was adopted for many secondary passenger routes in the United States (especially on the Boston and Maine Railroad) and Canada. These operations generally survived longer in Canada, but several were abandoned in the Via Rail cutbacks of the early 1990s. One that survives is Victoria – Courtenay train on Vancouver Island.

DMUs are used on the RiverLINE in New Jersey. Currently Colorado Railcar is demonstrating an FRA Crash Compliant DMU in the United States. NJ Transit has experimented with this DMU on the Princeton Branch line. In August 2006 it was announced that Amtrak wants the State of Vermont to experiment with DMUs on the state-subsidized Vermonter line from New Haven north to St. Albans to replace the less efficient diesel locomotive trainsets currently used.

MU streetcars were used in Toronto by the Toronto Transportation Commission (later Toronto Transit Commission) from 1949 to 1966 using 100 PCC A-7 built by St. Louis Car Company and Canadian Car and Foundry.[2] These two car units ran along the Bloor Street route only and ceased operations after the opening of the Bloor–Danforth subway line. The A-7 units were later converted to single use.