The Chicago Great Western Railway (reporting mark CGW) was a Class I railroad that linked Chicago, Minneapolis, Omaha, and Kansas City. It was founded by Alpheus Beede Stickney in 1885 as a regional line between St. Paul and the Iowa state line called the Minnesota and Northwestern Railroad. Through mergers and new construction, the railroad, named Chicago Great Western after 1892, quickly became a multi-state carrier. One of the last Class I railroads to be built, it competed against several other more well-established railroads in the same territory, and developed a corporate culture of innovation and efficiency to survive.

Nicknamed the Corn Belt Route because of its operating area in the midwestern United States, the railroad was sometimes called the Lucky Strike Road, due to the similarity in design between the herald of the CGW and the logo used for Lucky Strike cigarettes.

It was merged with the Chicago and North Western Railway (CNW) in 1968, which abandoned most of the CGW's trackage.

The History of the Chicago Great Western

Alpheus Beede Stickney was a lawyer-turned-railroad magnate who had found work in management of several railroads before striking out on his own.

The Chicago Great Western, circa 1897.

In 1854, the Legislature of the Territory of Minnesota had chartered the Minnesota and Northwestern Railroad (M&NW) to be built between Lake Superior, Minneapolis and Dubuque, Iowa. However, it stayed dormant until purchased by Stickney and another investor in 1883. Immediately, the railroad began building, and by 1886 had constructed a line between St. Paul, Minnesota and Dubuque.

By 1889, not only had the railroad changed its name to the Chicago, St. Paul and Kansas City Railroad (CStP&KC), it had finished a continuous line all the way across Illinois to Forest Park, Illinois, except for trackage rights with the Illinois Central across the Mississippi River. At Forest Park, the railroad made a connection with the ancestor of the Baltimore and Ohio Chicago Terminal for the last nine miles (14 km) into Chicago's Grand Central Station. The new construction included Illinois' longest railway bore, the Winston Tunnel, south of Galena.

Through merger and construction, the CStP&KC then added lines between Oelwein, Iowa, on the Chicago-to-St. Paul mainline, and Kansas City, Missouri, by 1891, and between Oelwein and Omaha, Nebraska by 1903. Thus, Oelwein became the hub of the railroad, and its main locomotive repair shops were soon located there. The mammoth facility was said to have inspired Walter Chrysler, who worked as the supervisor of the shops between 1904 and 1910.

The Great Western also expanded its assortment of feeder branch lines in Iowa, Minnesota and Illinois, but plans to continue expanding the railroad north to Duluth, Minnesota, west to Sioux City, Iowa or Denver, Colorado, or south into Mexico, never came to fruition. 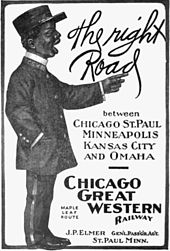 The railroad survived the Panic of 1893 to become the Chicago Great Western, and with Stickney at the helm soon developed a reputation for being an innovative and progressive competitor for traffic between the terminals it served. However, the Panic of 1907 forced it into bankruptcy, and the road was purchased by financial interests connected to J. P. Morgan. One of the first casualties of the buyout was Stickney, who was forced out and replaced by Samuel Morse Felton, Jr. in 1909. Felton realized that the railroad could not survive in the fiercely competitive markets it served without an ambitious and sustained effort to innovate and modernize. New rails, new locomotives including several Mallet locomotives (which set a precedent for the railroad acquiring large steam locomotives with substantial horsepower) pulled ever-longer freight trains over the system, and gasoline-powered motorcars to replace steam power on the lightly used passenger trains, were hallmarks of this rehabilitation. During this time period the CGW purchased an innovative 'Breach' Battery powered motorcar, equipped with 220 type A8H Edison nickel-steel batteries for power and 10 type A8H cells for light. This battery powered motorcar arrived from Breach, in 1912 [1] and during trial run speeds of 40mph were obtained on level track, 28.6mph on a 1 percent grade.

Felton retired in 1929 due to failing health. At the time he stepped down, investors friendly with Patrick H. Joyce had purchased a controlling interest in the Great Western from J. P. Morgan and had placed him in charge of the Great Western. The Wall Street Crash of 1929 threatened these financial interests, so Joyce and his friends, along with the Van Sweringen brothers, embarked on a stock-manipulation scheme to keep the price of CGW stock high. The inevitable happened in 1935, when the railroad declared bankruptcy once again. It was reorganized and re-emerged in 1941.[2]

Even as the CGW was being mismanaged, Joyce continued the modernization and innovation of his predecessors. The Great Western trimmed passenger service, which was never particularly profitable on the lightly populated lines, abandoned branch lines and refurbished main lines, and continued acquisition of huge locomotives, this time 2-10-4 Texas-types, which pulled enormous trains, sometimes one-hundred cars long and longer. However, a highly important innovation was the so-called "Piggyback Service", the forerunner of modern intermodal freight transport, which the Great Western introduced in 1936 by moving several hundred truck trailers on specially modified flat cars. The Great Western was also an early proponent of dieselization. It purchased its first diesel-electric locomotive, an 800 horsepower (600 kW) yard switcher from Westinghouse, in 1934 [3] The CGW was completely dieselized by 1950.

As it had happened in 1929, a group of businessmen friendly to William N. Deramus, Jr., president of the Kansas City Southern, had been purchasing up a controlling share of Great Western stock, and by 1949, this group appointed Deramus' son, William N. Deramus III, to head the railroad. He continued, even more aggressively than his predecessors, the modernization and cost-trimming that had become the hallmarks of the corporate culture of the CGW. Under Deramus, passenger service was almost entirely eliminated, and the railroad's offices, spread out in Chicago and throughout the system, were consolidated in Oelwein. Even longer trains than before, pulled by sets of five or more EMD F-units, became standard operating procedure, which slowed service but increased efficiency.

In 1946, the first proposal was advanced to merge the Great Western with other railroads, this time with the Chicago and Eastern Illinois Railroad and the Missouri–Kansas–Texas Railroad.[4] Investors balked and the CGW stayed independent, but even as the Great Western survived and thrived during the 1950s, it was becoming increasingly clear that the American railroad climate was changing. Railroads were merging, changing traffic patterns and threatening the delicate economic balance in which railroads of similar size and stability to the CGW could exist. By the time Deramus stepped down from the CGW in 1957 to take the presidency at the Missouri-Kansas-Texas,[5] the decade of the railroad super-mergers was just around the corner.

The Chicago Great Western was not known for its passenger trains, although it did fleet several named trains, mostly running between Chicago and the Twin Cities. Regardless of the railroad's small size and meager passenger fleet it looked for ways to more efficiently move passengers, such as employing all electric(battery powered)[1] and gas-electric motorcars on light branch lines, which was much cheaper to operate than traditional steam or diesel-powered trains.[citation needed] The CGW's most notable passenger trains from its major terminal cities included:[6]

Upon his resignation, Deramus was replaced by Edward T. Reidy. As before, innovations continued to keep the company profitable. Second-generation diesel locomotives such as the EMD GP30 and EMD SD40, the largest and most powerful diesel locomotive the CGW ever owned, found their way into the system, and the Oelwein Shops stayed busy repairing and maintaining the now-aged F-units long after many other railroads had replaced theirs with newer models. The Oelwein Shops also was busy maintaining the entire diesel switcher fleet of models from ALCO, Baldwin and EMD. Passenger service, reduced to two St. Paul to Omaha trains, was gone by 1962. Labor costs were trimmed, branch lines abandoned, as the Great Western was fiscally viable enough to be a suitable merger partner.

Upon the failure of a merger opportunity with the Soo Line Railroad in 1963, the board of the Great Western grew increasingly anxious about its continued viability in a consolidating railroad market. Testifying before the Interstate Commerce Commission in Chicago, President Reidy claimed, "The simple fact is that there is just too much transportation available between the principal cities we serve. The Great Western cannot long survive as an independent carrier under these conditions."[7]

The CGW, therefore, was open to a merger with the Chicago and North Western Railway (CNW), first proposed in 1964. After a 4-year period of opposition by other competing railroads, on July 1, 1968, the Chicago Great Western merged with Chicago and North Western.[8] Within two decades of the 1968 merger, most of the CGW right-of-way had been abandoned by the C&NW. The C&NW maintained the "Oelwein Shops" facilities at Oelwein until 1993 and after many clean up projects the shops were closed on May 13, 1994. 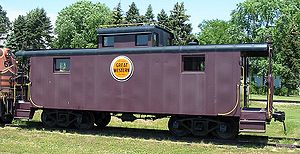 A CGW 622 caboose blt.1946 at the National Railroad Museum in Green Bay, Wisconsin.

Almost forty years after merger and piecemeal abandonment, some Chicago Great Western trackage and infrastructure remains in service. In Minnesota, the CGW branchline from Northfield to Cannon Falls is owned by the Union Pacific Railroad and operated by Progressive Rail. The CGW mainline from the Flint Hills refinery in Rosemount to Inver Grove Heights, MN is UP's "Roseport Industrial Lead" to the refinery. The CGW main from Inver Grove Heights to downtown St Paul is an extension of UP's Albert Lea subdivision. In Iowa, the largest remaining section of the CGW is located between Waterloo and Oelwein Iowa. A portion of this section is the 23-mile line of railroad now owned by D&W Railroad between Dewar and Oelwein. In Illinois, there is a small spur east of the former crossing of the Elgin, Joliet & Eastern serving a construction-materials business in West Chicago. A length of the former mainline from the DuPage Airport through St. Charles, including a large bridge over the Fox River, was operated by the UP as an industrial lead for several shippers including a lumber yard. UP filed to abandon the St. Charles industrial lead on 06/24/2010, and awaits the final decision. (STB docket #: AB_33_284_X). Also in Byron, a small section of trackage is used for car storage and the bridge over the Rock River is used to service the Byron Nuclear Generating Station.

Long sections of former CGW rights-of-way have been preserved as rail trails, such as the Great Western Trail between Villa Park and Sycamore, Illinois, the Cannon Valley Trail between Red Wing and Cannon Falls, Minnesota, the Sakatah Singing Hills State Trail between Faribault and Mankato, Minnesota, and the Heritage Trail between Dubuque and Dyersville, Iowa. Another trail between Cannon Falls and Faribault is being proposed by the Mill Towns Trail group from Northfield with the hope of being completed in the coming years. Several CGW depots also remain along abandoned rights-of-way, some converted to better serve their new, non-railroad owners, and others restored to their former appearance.

Additionally, the Elmhurst Depot (located off of York Street in Elmhurst) still stands, along with other depots in Villa Park and Elizabeth. 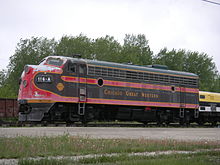 CGW 116A on display at Oelwein, Iowa

A handful of CGW locomotives remain operational, including one of the former CGW EMD GP7, two of the EMD F7Bs and three of the nine SD40s, but all have long since been repainted and scattered nationwide.[9] An EMD FP7-A, CGW 116-A, has been cosmetically restored and repainted, and is located at the former "Hub City" of the railroad at the Hub City Heritage Corporation museum in Oelwein (http://www.cgwo.org). Rare TR2B "Calf" 65B is unrestored, at the Boone and Scenic Valley Railroad as Chicago & North Western 1103. Sometimes an observant train watcher will notice an old hopper or tank car still painted in CGW colors, but even they are now quite rare.[10]