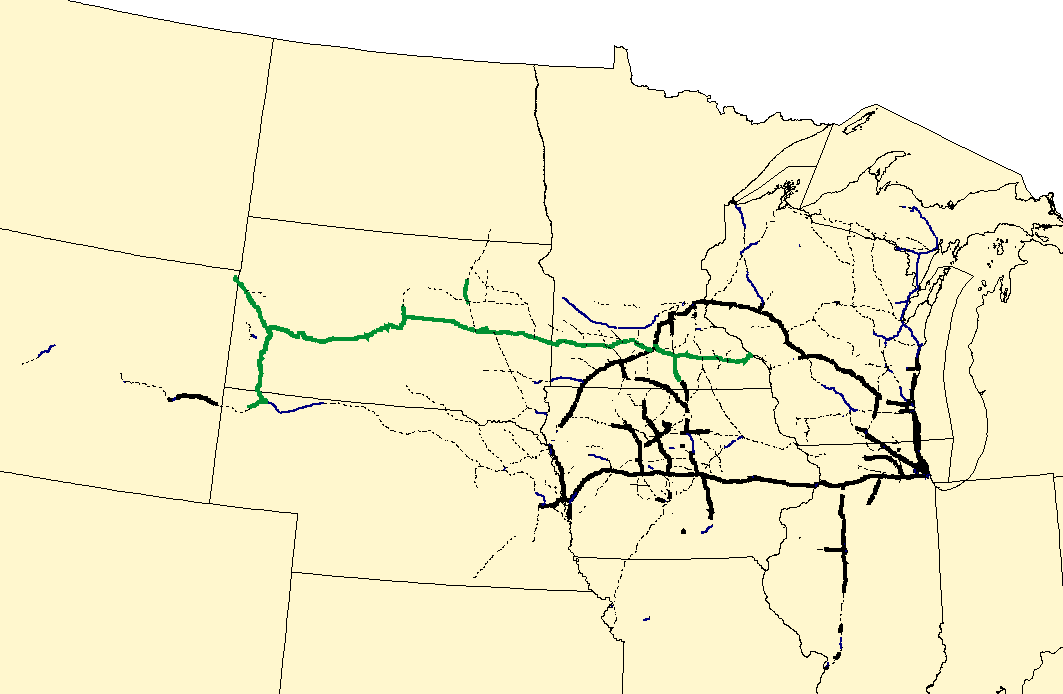 The Chicago and North Western Railway (AAR s: CNW, CNWS, CNWZ; unofficial abbreviation: C&NW) was a in the . It was also known as the North Western. The railroad operated more than convert|5000|mi of track as of the turn of the 20th century, and over convert|12000|mi of track in seven states before retrenchment in the late 1970s. The C&NW became one of the longest railroads in the USA as a result of mergers with other railroads, such as the , and others. By the time the purchased and merged the C&NW, track sales and abandonment had reduced the total mileage back to about 5,000. The majority of the abandoned and sold lines were lightly trafficked branches in , , , and . Large line sales, such as those that resulted in the further helped reduce the railroad to a mainline core with several regional feeders and branches. [cite web| url=http://midcontinent.org/collectn/steam/cnw1385.html |title=Chicago & North Western 1385|publisher=midcontinent.org| accessdate=2007-09-10|] The company was purchased by in April 1995 and ceased to exist.

The Chicago and North Western Railway was chartered on , . It had purchased the assets of the bankrupt Chicago, St. Paul and Fond du Lac Railroad five days earlier. On , , it officially merged with the , which had been chartered on , . Since the Galena & Chicago Union started operating in December 1848, and the Fond du Lac railroad started in March, 1855, the Galena and Chicago Union Railroad is considered to be the origin of the North Western railroad system.

The North Western picked up several important short railroads during its later years. It finalized acquisition of the Litchfield and Madison railroad on , . The Litchfield and Madison railroad was a convert|44|mi|km|sing=on bridge road from East St. Louis to . On , , the North Western acquired two former interurbans &ndash; the convert|36|mi|km|sing=on (DM&CI), and the convert|110|mi|km|sing=on (FDDM&S). The DM&CI gave access to the Firestone plant in , and the FDDM&S provided access to gypsum mills in .

On , , the North Western acquired the rail properties of the convert|1500|mi|km|sing=on . In spite of its name, it ran only from , to . This acquisition provided traffic and modern rolling stock, and eliminated competition.

On , , the 1,500 mile (2,400 km) was merged into the North Western. This railroad went from Chicago to . From there, separate lines went to the Twin Cities, Omaha, Nebraska, and . A connection from , to , provided a Twin Cities to Omaha main line. The Chicago Great Western duplicated the North Western's routes from Chicago to the Twin Cities and Omaha, but went the long way. This merger provided access to Kansas City and further eliminated competition. After abandoning a plan to merge with the in 1970, , who had headed the CNW and parent since 1956, arranged the sale of the railroad to its employees in 1972. The words "Employee Owned" were part of the company logo in the ensuing period.

After the (Rock Island) stopped operating on , , the North Western won a bidding war with the for purchase of the roughly convert|600|mi|km|sing=on "Spine Line" from the Twin Cities to Kansas City, Missouri, via Des Moines, Iowa. The North Western's bid of $93 million was approved on , , by the ICC. The line was well-engineered, but because of deferred maintenance on the part of the bankrupt Rock Island, a major rehabilitation was undertaken in 1984. The North Western then began to abandon the Oelwein to Kansas City section of its former Chicago Great Western trackage, which duplicated Spine Line service.

In April, 1995, the Chicago and North Western Transportation Company was merged into the .

Chicago and North Western locomotives continued to operate in their paint schemes for several years after the merger. As of 2007, two locomotives remain on the UP with CNW logos and reporting marks, C44-9Ws 8646 and 8701 (these locomotives, however, do have notable UP alterations, such as air conditioners in UP colors, UP horns, UP number boards, and UP plows). Union Pacific has decided to leave these 2 locomotives in their current condition until either of them suffers a serious mechanical problem, in which they will be overhauled and repainted at in . In addition to this, many former C&NW units have received "patches" with a new road number and reporting mark to match their new owner's roster. Approximately 40 "patched" units remain on the Union Pacific and several others work under different owners. However, it is still possible to find untouched C&NW units in service. For instance C&NW 411 and C&NW 1518 are kept and preserved at the , CNW 4153 now works at a grain elevator in , and several other GP7s, GP9s, and a few other C&NW locomotives are owned by various regionals, shortlines, or industries.

Union Pacific continues to follow its new tradition of releasing "Heritage" units to represent the paint schemes of companies absorbed by UP. After completion of painting at the 's Horicon, Wisconsin shop, UP 1995, an EMD SD70ACe locomotive painted in a "Heritage" C&NW paint scheme, was unveiled on , , at in Chicago, IL. North Western Station now serves as UP's terminus (although the station is officially designated the "Ogilvie Transportation Center", many locals still refer to the station as the "North Western Station", or as the "CNW Station"). The unit was then placed in dedicated service on former C&NW trackage, sometimes paired with the C&NW 8646 and 8701.

The CNW's most famous train, the Chicago-Twin Cities "400" was introduced in 1935 to compete with the Chicago, Burlington and Quincy's "Zephyr"s and the 's "Hiawatha"s. This train was named because it traveled the convert|400|mi|km between the cities in 400 minutes. CNW was the first system to start a high-speed Chicago-Twin Cities schedule because it used refurbished instead of new equipment, but in 1939, modernized the "400" with new E3A diesel locomotive pairs and streamlined cars.

In conjunction with Union Pacific and Southern Pacific, the North Western operated some long distance s including the "Overland Limited", "", "", "", and the "Challenger". These services lasted from 1889 to 1955, after which the CNW route to Chicago was changed to the 's on account of poor track conditions.

The CNW was known for running "left-hand main" on double track mainlines. In other words, traffic was routed by default to the track on the left rather than the track on the right. In the United States, most railroads followed the "right-hand main" operating practice, while "left-hand main" running was more common in countries where automobile traffic drove on the left as well. According to a display in the Lake Forest station, the reason for this was a combination of chance and inertia. When originally built as single-line trackage, the C&NW arbitrarily placed its stations on the left-hand side of the tracks (when headed inbound toward Chicago). Later, when a second track was added, it was placed on the side away from the stations so as not to force them to relocate. Since most passengers waiting at the stations were headed toward Chicago, the inbound track remained the one closest to the station platforms. The expense of reconfiguring signals and switches has prevented a conversion to right-hand operation ever since.

The railroad also purchased a great deal of its equipment second-hand. CNW shop forces economized wherever possible, earning the railroad the nickname "Cheap and Nothing Wasted."

Competition after 1985 was high Between . was also a major competitor until disestablishment in 1985.

Finally, the CNW has a following of more than 3,000 members of the .