The Northwestern Pacific Railroad (reporting mark NWP) is a regional railroad serving California's North Coast. The railroad currently runs on 62 miles of the 462 mile main line, stretching from Schellville, California to Eureka, California. The operating stretch is located between the California Northern Railroad interchange at Schellville and southern Windsor.

The NWP mainline is owned by Sonoma-Marin Area Rail Transit, or "SMART", a planned commuter railroad, from the Ignacio wye in Marin County, to the Healdsburg depot. The line between Schellville and Ignacio, and from north Healdsburg to Eureka is owned by the North Coast Railroad Authority.

The NWP was started in the late 1800s as a combined enterprise between the Santa Fe and Southern Pacific railroads, who both realized only one railroad would be profitable in the Eel River canyon. They two railroads bought and combined around 43 railroads and combined them all to create the Northwestern Pacific. Gauges range from 3 foot to standard, and included a early wooden monorail. In 1936, the Santa Fe sold its interests to the SP, which assumed full control.

Beginning in 1990, public interests began snatching up bits and pieces of the "Southern End," or from Willits to Schellville. The North Coast Railroad Authority was born by government action to save the NWP from abandonment. The NWP was finally sold from the SP in 1995, and the NWP was reborn in 1996, under new control, but was closed by the Federal Railroad Authority in early 2001 when storm damage and money problems led the NWP to become unsafe. 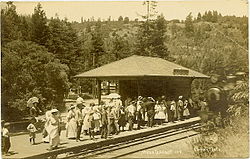 In the late 1800s both the Southern Pacific Railroad and the Santa Fe Railroad had great interests in building lines north from San Francisco to Humboldt County to tap into the rich logging industry up there. Both railroads planned on building a line north, the Santa Fe starting with a boat connection in present-day Larkspur, California, and the Southern Pacific, starting at its interchange in American Canyon, up north through Marin, Sonoma, Mendocino and Humboldt counties to finally terminate in Eureka, California. It soon became clear though as plans went forward that only one railroad would make money in the Eel River Caynon, and so the Southern Pacific and Santa Fe entered into a joint agreement, and in 1906 merged a total of 42 railroad companies between Marin and Humboldt Bay, to make one railroad line stretching from Schellville, California, to Eureka, California. The SP controlled the southern end of the line, from Willits down south to Marin and Schellville, while the AT&SF controlled the northern end, from Willits to Eureka. There were also dozens of miles of narrow gauge trackage in Marin, controlled by SP.

In 1929, the AT&ST sold its half-interest to the Southern Pacific, making the NWP a full SP subsidiary.

Passenger service boomed until the 1930s, when improved roads and highways made traveling and shipping by motor vehicle more accessible, and by 1935, both freight and passenger service slowed to crawl because of the Great Depression. It did not pick up again until World War II, when great demand for freight movement was needed. Freight service on the NWP picked up heavily again in the 1950s as a large increase in the demand for lumber came about due to the Housing Boom of the '50s.

During March 1958, all mainline passenger service was discontinued. Freight traffic remained high until the 1970s, when depletion of lumber and strong truck competition competed with the railroad, leading to less carloads.

By 1980, freight was still running in the Eel River Canyon, between Willits and Eureka, at that time the most expensive stretch of rail line to be operational and maintained in the United States.[4] The NWP's parent company Southern Pacific began looking at cutting back its unprofitable branches and subsidiary lines, and the NWP was one of them. In September 1983, the SP announced that it was shutting down the maintenance-intensive NWP line north of Willits. This led to a contentious court battle due to the fact that the SP did not properly notify the Interstate Commerce Commission of their intent to abandon the line. The line was ordered reopened by the U.S. Circuit Court in March 1984.

In 1992, what was left of the Eureka Southern was sold to the NCRA, who ran it under the "North Coast Railroad" until 1995, when severe flooding of the Eel River led to a almost total washout. The North End of the NWP has not been open since.

During that time, the Golden Gate Bridge Highway and Transportation District began to purchase sections of the NWP's south end. The SP began to lease the line to the California Northern Railroad in 1993, until the entire south end was purchased by a combination of the GGBHTD and Marin and Sonoma Counties, which merged to together with the NCRA on April 30, 1996, forming complete transformation from the SP.

Using "Black Widow" GP9s and SD9s locomotives, the new NWP ran from 1996 until 1998, when money problems and management issues caused the line to nosedive. The line was shut down due to numerous washouts and unsafe portions of track. The NWP resumed survice in 2001, between Schellville and Cotati, but was shut down approximately one month later, under the first and only Emergency Order put into place by the Federal Railroad Authority.

Beginning as early as 2009, the NCRA began to rebuild and fix up the NWP between Schellville and Windsor, and in July of 2011 it resumed light freight service between those two points after many legal hurdles. Plans for the future include trains reaching Healdsburg by summer 2012, and Willits by 2014. The Eel River Canyon segment is still on the drawing board while awaiting a decision whether or not to rebuild the segment, due to extreme costs and a lack of possible business. 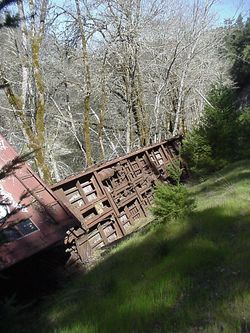 In 1992, the North Coast Railroad Authority (NCRA) purchased the Eureka Southern and leased the line to the newly-formed North Coast Railroad. The NCRA was created by state law in 1989 to preserve the Northwestern Pacific line from future abandonment. In 1996, the North Coast RR and the former "south end", owned by the Southern Pacific RR, became the "new" Northwestern Pacific Railroad under public ownership. The goals of the new Northwestern Pacific Railroad include handling more freight by rail along the Highway 101 corridor, establishing passenger excursion trains, and eventually providing regular passenger commuter service. In 1998 the railroad, which had more than 208 damaged sites along 216 mi (350 km), became the first and only railroad in the United States to be officially closed by the Federal Railroad Administration. In January 2001, the NWP was reopened between Willits and Novato, but service was temporarily discontinued in September 2001 because the operator lacked capital to continue operations. The track from Lombard to Healdsburg is owned by the SMART District; the California Northern Railroad (CFNR) has trackage rights granted from Schellville to Willits.[6]

On May 31, 2006, NCRA announced that it had selected a new operator for the line. The winning bidder was NWP, Inc., led by CEO John H. Williams who had been instrumental in setting up Caltrain service on the San Francisco Peninsula. NCRA announced approval of a 5-year contract with NWP Co. in September 2006.[7] The new NWP currently operates the line from Eureka to Schellville over the length of the original route of the NWP.

By late 2007, the NCRA was granted 500 million dollars to restore the original line from Napa to Willits. With Marin and Sonoma counties' Measure Q passing in 2008, the new SMART Rail is being planned between Larkspur and Cloverdale. Operation is expected to commence in 2014.

The NCRA and Northwestern Pacific Railroad originally planned to start regular freight service on the line in late fall 2009,but a lawsuit filed by the City of Novato pushed the date back to early 2010. Work forces began tie and ballast reconstruction from Schellville to Windsor in 2009, and electric crews have replaced and worked on many of the railroad crossings. When the freight service comes back, the North Coast Rail Authority will run trains of eight cars or fewer, and carry no hazardous materials. Reballasting and replacement of bad ties between Schellville and Windsor was completed by October 2009, with Federal Railroad Authority (FRA) inspections due to be finished in early 2011. An earlier target date in 2010 was delayed when the Federal Railroad Administration ruled NCRA's petition to reopen the line was dependent upon approval from Sonoma-Marin Area Rail Transit (SMART), with whom the NWP will share some trackage. This ruling was reversed in November 2010, but the two authorities still must complete a joint-operating agreement before freight service can begin. NCRA hopes to have freight service resume all the way up to Willits by the year 2020.

In June 2011, the Northwestern Pacific reopened the line and began operations over the section of track between Napa and Windsor, California. Service consists of about three trips weekly over the line. The railroad has hauled grain for dairy and poultry farms in Sonoma County, and lumber products. At Napa, the railroad has been exchanging freight with the California Northern Railroad in American Canyon.

The NWP 3 ft  (914 mm)-gauge line was built as the North Pacific Coast Railroad in 1873 from a San Francisco ferry connection at Sausalito to the Russian River at Monte Rio. Rails were extended downriver to Duncans Mills in 1876, and up Austin Creek to Cazadero in 1886. This narrow-gauge line became the Shore Division of the NWP formed by Santa Fe and Southern Pacific in 1907. The standard-gauge NWP Guerneville branch was extended to Monte Rio in 1907 and the line from Monte Rio to Duncans Mills was dual-gauged in 1909. Summer tourists from San Francisco visited Russian River vacation spots via joint narrow-gauge/standard-gauge NWP "triangle" excursions until automobile travel became more popular. The southern end of the line was standard-gauged from San Francisco Bay to Point Reyes Station at the head of Tomales Bay in 1920. The line up Austin Creek to Cazadero was standard-gauged in 1926. The remaining line from Monte Rio to Point Reyes Station was dismantled in 1930.[31]