The 1978 Charles River Dam, located behind the TD Garden, controls the water level in the river basin. An earlier dam (see Charles River Dam Bridge), located beneath the Museum of Science, was completed in 1910 with the purpose of creating a fresh water river basin and riverfront park in Boston. The newly landscaped banks of the river became known as the Charles River Esplanade. The modern dam houses six pumps that provide flood control protection. The dam's lock system permits travel of recreational and commercial vessels from the river to the harbor year round. A fish ladder allows for passage of anadromous fish (alewife, rainbow smelt and shad) during the migration season in late spring.

Created in the early 20th-century from tidal marshes and mud flats, the Charles River Basin was designed to provide city dwellers access to outstanding river scenery and recreational opportunities on both water and land. Though entirely designed—and in that sense artificial—the Basin is also a wildlife habitat for hundreds of animal and plant species that play a role in the ecology of the region and enrich the experience of urban park users. Water quality in the once heavily polluted Basin has improved dramatically in recent years, creating better habitat for wildlife and attracting people back to the river.

The character of the Basin changes along this 8.5-mile (13.7 km) stretch, forming three discernible zones: the Lower Basin, from the historic Charles River Dam to the Boston University Bridge; the Middle Basin, from the BU Bridge to Herter Park, and the Upper Basin, from Herter Park to the Watertown Dam. The Lower Basin is 2.5 miles (4.0 km) long and up to 2,000 feet (610 m) wide. The panoramas in the Lower Basin define the image of Boston and Cambridge. The Longfellow Bridge is a powerful presence in the Lower Basin, as are the slope of Beacon Hill and the gold dome of the State House. Particular park sections within the Reservation, such as Magazine Beach and Herter Park, provide intensely used open space for the bordering urban neighborhoods.

The Middle Basin is a zone of transition from urban and formal to rural and natural. Parkways lining the Charles River Basin separate it from contiguous open spaces. The largest open space is between the Harvard University athletic fields on the south and Mount Auburn and Cambridge cemeteries on the north. Together, these areas form a critical oasis for migrating birds.

Frederick Law Olmsted's 1889 design for Charlesbank included the first public outdoor gymnasium in the United States.[citation needed] The Esplanade, then known as the Boston Embankment, was created along with the construction of the 1910 Charles River Dam (today the site of the Museum of Science). The parkland was criticized for its lack of shade trees, refreshment stands, recreation facilities, transportation utility, and visitors.[2] It extended to Charlesgate (upstream of the Harvard Bridge) and connected with Olmsted's Emerald Necklace. To address criticism, trees, a refreshment pavilion, and concerts were brought to the park.[2]

The Esplanade went through a major expansion from 1928 to 1936, widening and lengthening the park land. These improvements were aided by a one million dollar donation from Helen Osbourne Storrow, in memory of her husband James. The Storrow Memorial Embankment, designed by Arthur Shurcliff added beaches, the first lagoon, boat landings, plazas, playgrounds, and the Music Oval,[2] where a temporary bandshell was placed. The summer of 1929 was the first year Arthur Fiedler and the Boston Pops performed on the Esplanade.

In 1941, the construction of the Hatch Memorial Shell gave the Pops, and a wide range of other artists and performers, a first class stage for popular summer events. In the 2000s, half a million people attend the Boston Pops concert and fireworks display held there every Independence Day. The Hatch Shell also hosts more than seventy free public concerts and movies, and special events—walkathons, races, and festivals such as Earth Day—draw hundreds of thousands of additional spectators each year.

Sailing on the Charles began in the 1930s, and the boathouse on the Esplanade was built in 1941.[3] Organized in 1946, Community Boating was the country's first public boating program. For a modest fee, thousands of people have learned to sail on the Charles River. For those who prefer rowing, Community Rowing, located at Harry Parker Boathouse on Nonantum Broad in Brighton, offers instruction to the public.

The next major change to the Esplanade began in 1949, with the construction of Storrow Drive. To make up for park land lost to the new road, additional islands including multiple paths were built along the Esplanade, also designed by Arthur Shurcliff and his son Sydney.[2] In the 1960s, the Esplanade was linked to Herter Park in Brighton, and other upstream parks, with the construction of the Dr. Paul Dudley White Bike Path. This 18-mile (29 km) loop travels along the entire basin on both the North and South sides of the river, and makes it especially suitable for biking, inline skating, and running. 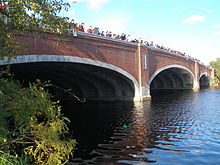 A memorial to President Kennedy, this 5-acre (2.0 ha) site near Harvard Square is landscaped with plants that bloom at the time of the President's May birthday and a memorial fountain. The park uses materials indigenous to New England including native trees, and the granite fountain and the entrance pillars are inscribed with quotations from the President's speeches.

Riverbend Park extends on the north side of the Charles, from the Eliot Bridge to Western Ave. in Cambridge. Memorial Drive here is closed to automobile traffic on Sundays during warmer months.[4]