The Old Manse is an historic manse famous for its American literary associations. It is now owned and operated as a nonprofit museum by the Trustees of Reservations. The house is located on Monument Street in Concord, Massachusetts, and it neighbors the North Bridge over the Concord River, a part of Minute Man National Historical Park.

The Old Manse was built in 1770 by Rev. William Emerson, father of noted minister Rev. William Emerson and grandfather of famous transcendentalist writer and lecturer Ralph Waldo Emerson. The builder was the town minister in Concord, chaplain to the Provincial Congress when it met at Concord in October 1774 and later a chaplain to the Continental Army. Rev. Emerson observed the fight at the North Bridge, a part of the Concord Fight, from his farm fields while his wife and children witnessed the fight from the upstairs windows of their house.

Rev. Emerson died in October 1775 in West Rutland, Vermont, while returning home from Fort Ticonderoga. His widow remarried, to the Rev. Ezra Ripley, and the family continued to live in the Old Manse. Rev. Ripley served as Concord's town minister for 63 years.

In November 1834, Ralph Waldo Emerson moved to the Manse where he lived with his aging step-grandfather Ezra Ripley. While there, he wrote the first draft of "Nature", a foundational work of the Concord Transcendentalist movement.

In 1842, the American writer Nathaniel Hawthorne rented the Old Manse for $100 a year. He moved in with his wife, transcendentalist Sophia Peabody, on July 9, 1842, as newlyweds.[2] Friend Henry David Thoreau created a vegetable garden for the couple.[3] The Hawthornes lived in the house for three years. In the upstairs room that Hawthorne used as his study, one can still view affectionate sentiments that the two etched into the window panes. The inscription reads:

Man's accidents are God's purposes. Sophia A. Hawthorne 1843
Nath Hawthorne This is his study
The smallest twig leans clear against the sky
Composed by my wife and written with her diamond
Inscribed by my husband at sunset, April 3 1843. In the Gold light.
SAH[4]

On the first anniversary of his marriage, Hawthorne and his neighbor, poet Ellery Channing, searched the neighboring Concord River for the body of Martha Hunt, a local woman who drowned. Hawthorne wrote of the incident, "I never saw or imagined a spectacle of such perfect horror... She was the very image of death-agony."[5] The incident inspired the climactic scene in his novel The Blithedale Romance (1852).

During his time in the Old Manse, Hawthorne published about twenty sketches and tales, including "The Birth-Mark" and "Rappaccini's Daughter", which would be included in the collection Mosses from an Old Manse (1846).[6] One description of the house he wrote notes: "Between two tall gateposts of roughhewn stone... we behold the gray front of the old parsonage, terminating the vista of an avenue of black ash trees."[7] The Hawthornes were forced out of the home for not paying their rent.[8] Returning to Concord seven years later, Sophia Hawthorne visited the Old Manse on October 1, 1852. She referred to it as "the beloved old house".[9] 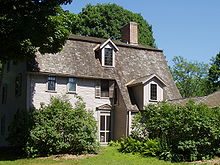 The Old Manse, viewed from its Concord River side

The house remained in use by the Emerson-Ripley family until 1939, and was conveyed to the Trustees of Reservations on November 3, 1939. The house was conveyed complete with all its furnishings, and contains a remarkable collection of furniture, books, kitchen implements, dishware, and other items, as well as original wallpaper, woodwork, windows and architectural features.

The Manse is open seasonally for guided tours given by the Trustees of Reservations who also run a book store in the house specializing in the American Revolution, Women's History, Nathaniel Hawthorne, Transcendentalism, and Sustainability.