The Charles River is an 80 mi (129 km) long river that flows in an overall northeasterly direction in eastern Massachusetts, USA. From its source in Hopkinton, the river travels through 22 cities and towns until reaching the Atlantic Ocean at Boston. It is also sometimes called the River Charles.

The river is well known for its rowing, sculling, dragonboating, and sailing, both recreational and competitive. The river may also be kayaked; depending on the season, however, kayakers can only navigate the Charles by getting out and dragging their kayaks for significant stretches. The "Lower Basin" between the Longfellow and Harvard bridges is home to Community Boating, the Harvard University Sailing Center, and the MIT Sailing Pavilion. The Head of the Charles Regatta is held here every October. In early June, the annual Hong Kong Boston Dragon boat Festival is held in Cambridge, near the Weeks Footbridge.

The Charles River Bike Path runs 23 miles (37 km) along the banks of the Charles, starting at the Museum of Science and passing the campuses of MIT, Harvard and Boston University. The path is popular with runners and bikers. Many runners gauge their distance and speed by keeping track of the mileage between the bridges along the route.[2]

View of the Charles River and Boston at night

The river's name, preceding the English version, was once thought to be Quinobequin (meandering), though that attribution has been discredited by, among others, the Harvard University Librarian in 1850.[citation needed] The river was used by Native Americans for local transportation and fishing, and as part of the passage from southeastern Massachusetts to northern New England.

Captain John Smith explored and mapped the coast of New England, naming many features including the Charles River, which he gave the Native American name, Massachusetts River. When Smith presented his map to Charles I he suggested that the king should feel free to change any of the "barbarous names" for "English" ones. The king made many such changes, but only four survive today, one of which is the Charles River, which Charles named for himself.[3]

In portions of its length, the Charles drops slowly in elevation and has relatively little current. Despite this, early settlers in Dedham, Massachusetts, found a way to use the Charles to power mills. In 1639, the town dug a canal from the Charles to a nearby brook that drained to the Neponset River. By this action, a portion of the Charles's flow was diverted, providing enough current for several mills. The new canal and the brook together are now called Mother Brook. The canal is regarded as the first industrial canal in North America. Today it remains in use for flood control.

Waltham was the site of the first fully integrated textile factory in America, built by Francis Cabot Lowell in 1814[citation needed], and by the 19th century, the Charles River was one of the most industrialized areas in the United States. Its hydropower soon fueled many mills and factories. By the century's end, 20 dams had been built across the river, mostly to generate power for industry. An 1875 government report listed 43 mills along the 9.5-mile (15 km) tidal estuary from Watertown Dam to Boston Harbor. From 1816 to 1968, the U.S. Army operated a gun and ammunition storage and later production facility known as the Watertown Arsenal. While it was key to many of the nation's war efforts over its several decades in operation, not the least of which being the American Civil War and World War I, its location in Watertown so near the Charles did great environmental harm. The old arsenal itself was declared a Super Fund site and, after its closure by the government, had to be cleaned at significant expense before it could be safely used again for other purposes. Likewise, the many factories and mills along the banks of the Charles supported a buoyant economy in their time but left a legacy of massive pollution. 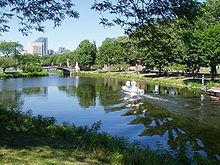 A sunny day on the Charles River Esplanade

Today's Charles River basin between Boston and Cambridge is almost entirely a work of human design. Owen A. Galvin was appointed head of the Charles River Improvement Commission by Governor William E. Russell in 1891. Their work led to the design initiatives of noted landscape architects Charles Eliot and Arthur Shurcliff, both of whom had apprenticed with Frederick Law Olmsted, and by the architect and landscape architect Guy Lowell. This designed landscape now includes over 20 parks and natural areas along 19 miles (31 km) of shoreline, from the New Dam at the Charlestown Bridge to the dam near Watertown Square.

Eliot first envisioned today's river design in the 1890s, an important model being the layout of the Alster basin in Hamburg,[4] but major construction began only after Eliot's death with the damming of the river's mouth at today's Museum of Science, an effort led in by James Jackson Storrow. The new dam, completed in 1910, stabilized the water level from Boston to Watertown, eliminating the existing mud flats, and a narrow embankment was built between Leverett Circle and Charlesgate. After Storrow's death, his widow Mrs. James Jackson Storrow donated $1 million toward the creation of a more generously landscaped park along the Esplanade; it was dedicated in 1936 as the Storrow Memorial Embankment. This also enabled the construction of many public docks in the Charles River Basin. In the 1950s a highway (Storrow Drive) was built along the edge of the Esplanade to connect Charles Circle with Soldiers Field Road, and the Esplanade was enlarged on the water side of the new highway.

The Inner Belt highway was proposed to cross the Charles River at the Boston University Bridge, but its construction was canceled in the 1970s.

As sewage, industrial wastewater and urban runoff flowed freely into the river from the surrounding city, the Charles River became well known for its high level of pollutants, gaining such notoriety that by 1955, Bernard DeVoto wrote in Harper's Magazine that the Charles was "foul and noisome, polluted by offal and industrious wastes, scummy with oil, unlikely to be mistaken for water." [5] It was not an uncommon sight to see toxins coloring the river pink and orange in spots, fish kills and submerged cars.[6]

Once popular with swimmers, awareness of the river's high pollution levels forced the state to shut down several popular swimming areas, including Cambridge's Magazine Beach and Gerry Landing public beaches. Until very recently, rowers and sailors who fell into the water were advised to go to the hospital for tetanus shots.[5] 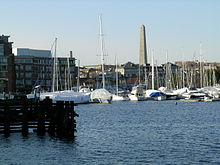 Efforts to clean up the river and restore it to a state where swimming and fishing would be acceptable began as early as the 1960s and the program to clean up the Charles for good took shape in 1965 with the creation of the Charles River Watershed Association.[7] In 1995, the United States Environmental Protection Agency declared a goal of making the river swimmable by 2005.[5] In 1996, then governor William Weld plunged, fully clothed, into the river to prove his commitment to cleaning up the river.[8] In July 2007, the river hosted the Charles River Masters Swim Race, the first sanctioned race in the Charles in over five decades.[9]

A combination of public and private initiatives helped dramatically lower levels of pollutants by focusing on eliminating combined sewer overflows and storm water runoff. A new Charles River Dam was constructed downstream from the Science Museum site to keep salt water out of the basin. Since Weld's stunt, the river's condition has improved dramatically, although it was not deemed entirely swimmable by 2005. In 1995 the EPA rated the river's quality as a "D" compared to the most recent ranking of a "B+" and most days of the year, the river now meets swimming standards below the Harvard Bridge.[5] With the improved water quality, swimming and fishing are progressively re-emerging as about 90% of the length of the river is now considered safe for swimming.[7] Health risks remain, however, particularly after rainstorms and when walking in certain riverbeds stirs up toxic sediment.[citation needed]

During the period September 2004 to September 2006, the City of Cambridge and the state's Department of Conservation and Recreation introduced vegetation at Magazine Beach just west of the BU Bridge on the Cambridge side of the river. This introduced vegetation had significant problems surviving because it was not native to the Charles River.[citation needed] The vegetation installed created a wall preventing the reintroduction of swimming at Magazine Beach.[citation needed] 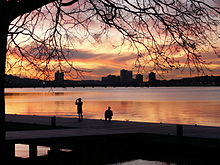 Sunset at Charles River in December 2010

The Conservation Law Foundation opposes the permit given to Mirant for the Mirant Kendall Generating Station, an electricity plant near Kendall Square, charging that the water it releases causes blooms of hazardous microorganisms, due to its warm temperature.[10]

It is a common belief that the water quality of the Charles River is at its worst after a large rainfall because of pollutants carried by runoff. However, a study, published in the Journal of the American Water Resources Association (April 2008), completed by researchers at Northeastern University, found high concentrations of E. coli bacteria in the Charles River after a long period of no rain. Using a mathematical model, the researchers then determined that two major tributaries, the Stony Brook and Muddy River, are the predominant sources of E. coli in the lower Charles River.[11]

Oysters have been used to filter and clean Charles River water.[12] 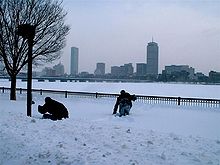 Looking towards Boston across the Charles in winter

That's where you'll find me
Along with lovers, muggers, and thieves

(Ahh, but they're cool people)

But I love that dirty water
Oh, Boston, you're my home