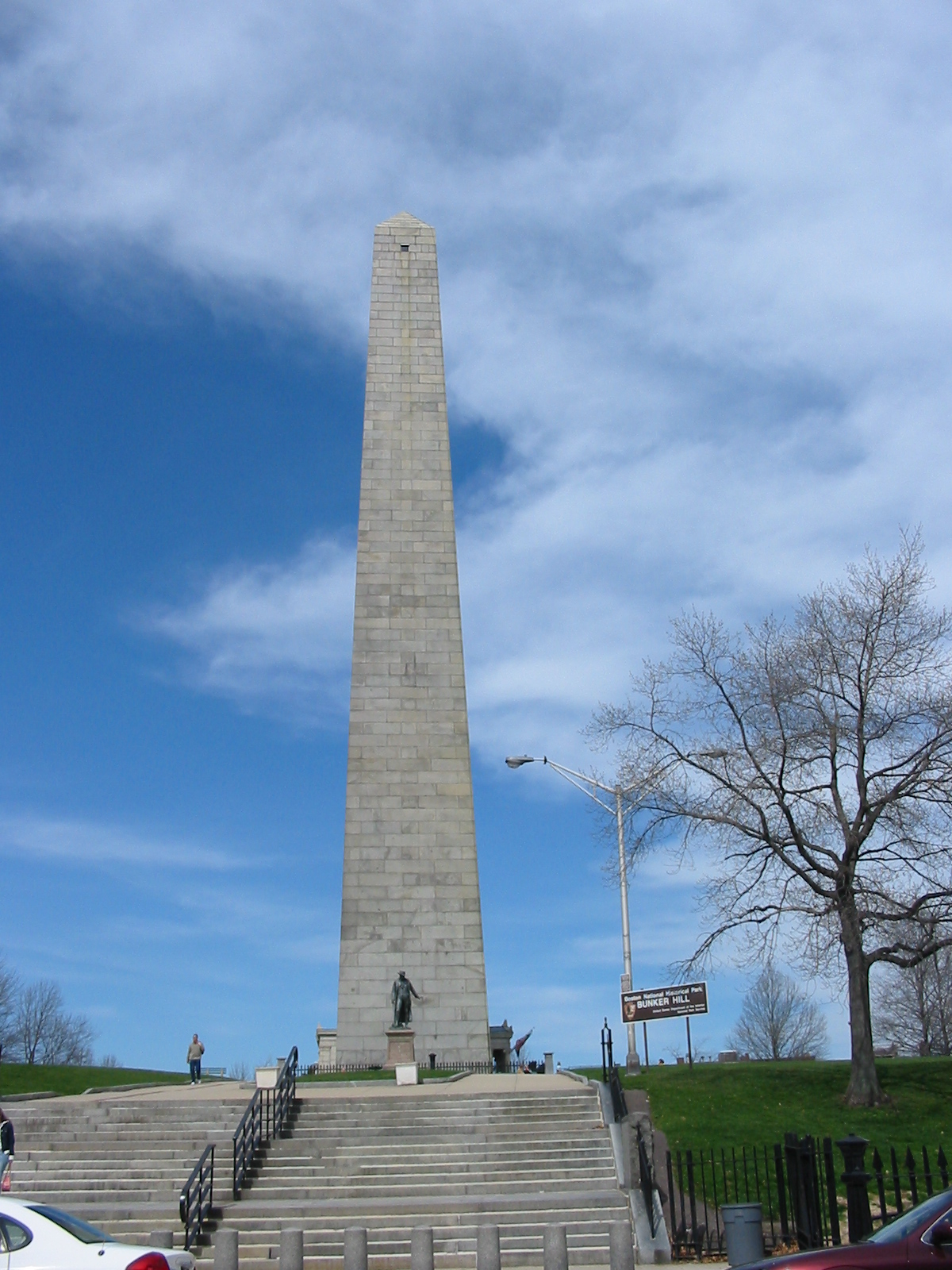 The Bunker Hill Monument was built to commemorate the . The 221 foot (67 m) granite obelisk was erected between 1827 and 1843 in with granite from , conveyed to the site via the first commercial railway in the United States, built specially for that purpose, followed by a trip by barge. There are 294 steps to the top.

The Bunker Hill Monument is not on Bunker Hill but instead on , where most of the fighting in the misnamed actually took place. The Monument Association, which had purchased the battlefield site, was forced to sell off all but the hill's summit in order to complete the monument.

The monument was erected to commemorate the Battle of Bunker Hill, the first major conflict between British and Patriot forces in the , fought there June 17, 1775. The first monument at the site was created in memory of Mason and fallen Bunker Hill hero Dr. in 1794 by King Solomon's Lodge of Masons and was initially an 18 foot (5.5 m) wooden pillar topped with a gilt urn. In front of the obelisk is a statue of Col. , another hero of Bunker Hill. A native of Groton, he coined the famous Revolutionary War phrase, "Don't fire until you see the whites of their eyes". That order was popularized by stories about Bunker Hill. However, it is uncertain as to who said it, since various writers attribute it to Putnam, Stark, Prescott or Gridley. Doubts have also been expressed as to how original it was, and whether it was said at all.

An exhibit lodge built adjacent to the monument in the late 19th century houses a statue of Warren and a diorama of the battle. Bunker Hill is one of the sites along the and is part of .

The monument site reopened on , , after completion of a 3.7 million dollar renovation that included repairs, handicap accessibility improvements, and new lighting for the Bunker Hill Monument that was switched on for the first time on , 2007. A new Bunker Hill Museum, across the street from the Monument, was dedicated on , 2007, and includes many new exhibits.

Construction of the monument

, a well-known Boston lawyer and antiquarian, first suggested the memorial and an interested group of men met for breakfast at the home of Colonel . Among them were William Tudor, , Professor , Doctor John C. Warren, William Sullivan, and George Blake. On , the first public meeting was called. Each member subscribed five dollars, and on , the Bunker Hill Monument Association was established and the work of raising money was begun. Famed nineteenth-century philanthropist contributed $10,000 to fund the building.

In the spring of 1825 the directors had purchased about 15 acres (61,000 m²) on the slope of Breed's Hill, but had not yet chosen a design. The first design committee consisted of , noted engineer , , , and . One hundred dollars was offered for the best design; about 50 plans were presented in response. Choice was soon narrowed to two (a column and an obelisk) and a new committee was appointed to procure designs and estimate expenses for each. At the next meeting the majority voted that the obelisk designed by be used. The directors laid the corner-stone on , . The performed the ceremony, delivered the oration, and the Grand Master of the of Massachusetts, Ancient Free and Accepted Masons, conducted the services. Rev. Joseph Thaxter, who was wounded in the battle, officiated as chaplain at the ceremony, offering a prayer in thanks for the colonists' victory. [ [http://books.google.com/books?id=EhUpxD8ePjoC&pg=PA85&lpg=PA85&dq=%22leavitt+thaxter%22+mayhew&source=web&ots=9C3d1tvRjS&sig=eYuHm5enHpB4K4bCKroQij2pneY&hl=en#PPA85,M1 Thaxter prayer, Annals of the American Pulpit, William Buell Sprague, 1865] ] [ [http://books.google.com/books?id=xuigq23ybG0C&pg=PA281&lpg=PA281&dq=%22joseph+thaxter%22+bunker+hill&source=web&ots=rI-S3I3fcQ&sig=JJu9Ke-giBgdnf3W8SaaWSu8u8w&hl=en History of the Town of Hingham, Massachusetts, Thomas Tracy Bouve, 1893] ]

Perhaps surprisingly, a railroad was created to carry granite to the monument for its construction. Work proceeded somewhat slowly at first, but the was completed in short order and became operational on , , as the first commercial railroad in the United States functioning as a common carrier.

Construction was frequently halted as available funds were depleted. To bring the project to completion the Monument Association in 1838 began to sell off the ten acres of the battlefield as house lots, eventually preserving only the summit of Breed's Hill as the monument grounds. The capstone was laid on July 23, 1842 with the monument being dedicated on of the following year, again with a Daniel Webster oration.

The Bunker Hill Monument Association maintained the monument and grounds until 1919 when it was turned over to the Commonwealth of . In 1976 the monument was transferred to the and became a unit of .

The blocks of granite for the monument average two cubic yards each and were quarried by wedging, and delivered to the site of the monument at an actual cost of $5.40 per cubic yard, from a quarry opened for the purpose. The average contract offers for the same were $24.30. [The Civil Engineer's Pocket-Book, Trautwine et al, 19th Edition, 1909]