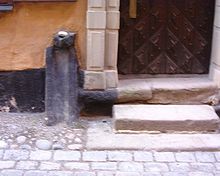 A medieval waste pipe in Stockholm Old Town formerly deposited sewage on the street to be flushed away by rain.

Sewage is water-carried waste, in solution or suspension, that is intended to be removed from a community. Also known as wastewater, it is more than 99% water and is characterized by volume or rate of flow, physical condition, chemical constituents and the bacteriological organisms that it contains. In loose American English usage, the terms 'sewage' and 'sewerage' are sometimes interchanged.[1] Both words are descended from Old French assewer, derived from the Latin exaquare, "to drain out (water)"

Classes of sewage include sanitary, commercial, industrial, agricultural and surface runoff. The spent water from residences and institutions, carrying body wastes, washing water, food preparation wastes, laundry wastes, and other waste products of normal living, are classed as domestic or sanitary sewage. Liquid-carried wastes from stores and service establishments serving the immediate community, termed commercial wastes, are included in the sanitary or domestic sewage category if their characteristics are similar to household flows. Wastes that result from an industrial process or the production or manufacture of goods are classed as industrial wastewater. Their flows and strengths are usually more varied, intense, and concentrated than those of sanitary sewage. Surface runoff, also known as storm flow or overland flow, is that portion of precipitation that runs rapidly over the ground surface to a defined channel. Precipitation absorbs gases and particulates from the atmosphere, dissolves and leaches materials from vegetation and soil, suspends matter from the land, washes spills and debris from urban streets and highways, and carries all these pollutants as wastes in its flow to a collection point.[2]

All categories of sewage are likely to carry pathogenic organisms that can transmit disease to humans and other animals; contain organic matter that can cause odor and nuisance problems; hold nutrients that may cause eutrophication of receiving water bodies; and can lead to ecotoxicity. Proper collection and safe, nuisance-free disposal of the liquid wastes of a community are legally recognized as a necessity in an urbanized, industrialized society.[2] The reality is, however, that around 90% of wastewater produced globally remains untreated, causing widespread water pollution, especially in low-income countries.

Increasingly, agriculture is using untreated wastewater for irrigation. Cities provide lucrative markets for fresh produce, so are attractive to farmers. However, because agriculture has to compete for increasingly scarce water resources with industry and municipal users, there is often no alternative for farmers but to use water polluted with urban waste, including sewage, directly to water their crops. There can be significant health hazards related to using water loaded with pathogens in this way, especially if people eat raw vegetables that have been irrigated with the polluted water.

The International Water Management Institute has worked in India, Pakistan, Vietnam, Ghana, Ethiopia, Mexico and other countries on various projects aimed at assessing and reducing risks of wastewater irrigation. They advocate a ‘multiple-barrier’ approach to wastewater use, where farmers are encouraged to adopt various risk-reducing behaviours. These include ceasing irrigation a few days before harvesting to allow pathogens to die off in the sunlight, applying water carefully so it does not contaminate leaves likely to be eaten raw, cleaning vegetables with disinfectant or allowing fecal sludge used in farming to dry before being used as a human manure.[3] The World Health Organization has developed guidelines for safe water use.

A system of sewer pipes (sewers) collects sewage and takes it for treatment or disposal. The system of sewers is called sewerage or sewerage system (see London sewerage system) in British English and sewage system in American English. Where a main sewerage system has not been provided, sewage may be collected from homes by pipes into septic tanks or cesspits, where it may be treated or collected in vehicles and taken for treatment or disposal. Properly functioning septic tanks require emptying every 2–5 years depending on the load of the system.

Sewage and wastewater is also disposed of to rivers, streams and the sea in many parts of the world. Doing so can lead to serious pollution of the receiving water. This is common in third world countries and may still occur in some developed countries, where septic tank systems are too expensive.

Sewage treatment is the process of removing the contaminants from sewage to produce liquid and solid (sludge) suitable for discharge to the environment or for reuse. It is a form of waste management. A septic tank or other on-site wastewater treatment system such as biofilters can be used to treat sewage close to where it is created.

Sewage water is a complex matrix, with many distinctive chemical characteristics. These include high concentrations of ammonium, nitrate, phosphorus, high conductivity (due to high dissolved solids), high alkalinity, with pH typically ranging between 7 and 8. Trihalomethanes are also likely to be present as a result of past disinfection.

In developed countries sewage collection and treatment is typically subject to local, state and federal regulations and standards.

Sewage sludge can be collected through a sludge processing plant that automatically heats the matter and conveys it into fertiliser pellets (hereby removing possible contamination by chemical detergents, ...)[4] This approach allows to eliminate seawater pollution by conveying the water directly to the sea without treatment (a practice which is still common in developing countries, despite environmental regulation). Sludge plants are useful in areas that have already set-up a sewage-system, but not in areas without such a system, as composting toilets are more efficient and do not require sewage pipes (which break over time).