Church and Wellesley is an LGBT-oriented community located in Toronto, Ontario, Canada. It is roughly bounded by Gerrard Street to the south, Yonge Street to the west, Charles Street to the north, and Jarvis Street to the east, with the core commercial strip located along Church Street from Wellesley south to Alexander. Though some gay and lesbian oriented establishments can be found outside of this area, the general boundaries of this village have been defined by the Gay Toronto Tourism Guild.[1] The American television series Queer as Folk was filmed in the Church and Wellesley area.

Church and Wellesley is home to the annual Pride Week celebrations, the largest event of its kind in Canada with over 90 floats and an enthusiastic crowd that numbers in the hundreds of thousands. The Pride Parade is always on the last weekend in June. It runs southward along Yonge Street. The Dyke March is a women-only parade that runs on Saturday afternoon and has a smaller parade route. There is also a weekend-long community fair that closes off Wellesley between Yonge and Church and also goes into Church Street. The community fair includes tables from a wide variety of groups involved in or associated with queer culture.

The 519 Church Street Community Centre is the meeting place for numerous social and political groups and became well known as a LGBT-friendly space. "The 519" as it is most often called, is a City of Toronto-run recreation centre that has been adopted locally as the Queer Community Centre, though its programming is not exclusive to LGBT groups and organizations. In 2007, a new wing was opened, and upgrades to the existing spaces were completed in 2009.

While the neighbourhood is home to the community centre, parks, bars, restaurants, and stores catering to the LGBT community (particularly along Church Street), it is also a historic community with Victorian houses and apartments dating back to the late 19th and early 20th century. Many LGBT people also live in the nearby residential neighbourhoods of The Annex, Cabbagetown, St. James Town, St. Lawrence, Riverdale and the Garden District, and in smaller numbers throughout the city and its suburbs.

Church and Wellesley is also home to the AIDS Memorial, located in Cawthra Park, where the names of members of the community who have been lost to AIDS are etched into bronze plaques. A memorial candlelight vigil is held each year at the AIDS Memorial, during Pride Week.

Other names for the area

A number of alternative names for Church and Wellesley exist in local vernacular, including the Gay Ghetto, the Village or the Gay Village, the Gaybourhood and Mollywood. (named after Alexander Wood) Less commonly used terms include Gay & Wellesley and Queers Park (a play on words with Queen's Park, the seat of Ontario's provincial government); however, many of these "nicknames" are generic to gay villages across the English speaking world and are therefore not descriptive of Church and Wellesley specifically, but of gay villages in general. Most people refer to it simply as Church Street or The Village, since most of the gay-related establishments in the area are located on that street.

In the summer of 2004, the business association launched a pilot project. Every Sunday from 10 a.m. to 10 p.m. throughout the summer, two blocks of Church Street, from Wellesley south to Alexander, were closed to traffic to encourage more pedestrian activity. However, this proved controversial when some business owners accused other businesses of "stealing" customers by providing street entertainment, and ended three weeks earlier than planned due to a lack of money.

The business association also sponsors the Church Street Fetish Fair in August.[3] In 2003, San Francisco's Folsom Street Fair had licensed a consortium of Toronto community groups to use the name Folsom Fair North for a similar fetish fair. That fair was held in a large parking lot near the corner of Wellesley and Yonge in 2003 and 2004, and in Allan Gardens in 2005, and the "Church Street Fetish Fair" was widely perceived as retaliation for the Folsom fair not being held on Church Street itself. Folsom Fair North, which changed its name to FFN in 2006, was last held in 2007. 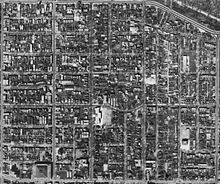 Aerial Photograph of the area, 1942

The portion of the neighbourhood bounded by Yonge, Jarvis, Maitland and Carlton Streets was once the estate of Alexander Wood, a merchant and magistrate in Upper Canada who was at the centre of a strange, supposedly sexually related scandal in 1810. His lands were derisively known as "Molly Wood's Bush" in the early nineteenth century — "molly" being a contemporary slang term for "homosexual". In the Spring of 2005, a statue of Wood was erected at the corner of Church and Alexander Streets (the latter named for Wood), honouring him as a forefather of Toronto's modern gay community.

Church Street and the area around it has been familiar to the Toronto gay community for many decades. Prior to the 1970s there had been an underground (mostly male) gay scene centred around various bathhouses and bars around the city that were not exclusively gay establishments but were known to be frequented by homosexuals. Allan Gardens, just east of Church Street on Carlton, was a well-known cruising area for gay men. The most notable bar for the gay subculture was the St. Charles Tavern at Yonge Street (one block west of Church) just south of Wellesley. During the 1970s, the bar was the focus of many attacks by homophobes, especially on Halloween. There were also a number of gay-oriented businesses on St. Nicholas Street, a laneway just west of Yonge in the same area. The Glad Day Bookshop, for many years the city's only gay oriented bookstore, opened on Yonge Street near Wellesley in the mid-1970s. 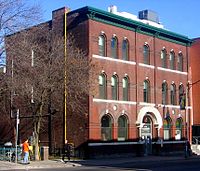 Church Street started to become a predominantly gay area, and the centre of the gay life in Toronto, following the 1981 Toronto bathhouse raids, an event that galvanized the gay and lesbian community in the city. George Hislop, a gay businessman and co-owner of one of the raided bath houses, ran for Toronto city council with his campaign headquarters located at Church and Wellesley.

In the 1980s, the 519 Church Street Community Centre became the meeting place for numerous social and political groups and became well known as an LGBT friendly space. A strip of gay bars opened along the street and many LGBT people rented apartments, joined residential co-ops or bought condos close to Church. The area became known as a friendly environment where people could be open about their sexual orientation.

As times have changed and Canadian society has become more open to homosexuality, Church Street may no longer serve as a sanctuary. Many bars and clubs throughout Toronto are now gay-friendly; establishments such as the Drake Hotel and the Gladstone Hotel, although outside of Toronto's traditional gay village and not technically gay bars per se, are popular destinations for young gay and lesbian club-goers.

As well, rental rates for both commercial and residential property have risen significantly. Many privately owned businesses have been forced to close down or move to other areas due to these rate increases, and much larger corporations — such as Starbucks, Subway and the Bank of Montreal — have settled on the street.

The residents of the area are now largely middle-aged men with established careers. The high rents mean that the majority of gay youth cannot afford to live in the neighbourhood. Some choose to settle in nearby neighbourhoods such as St. James Town and Cabbagetown, while others no longer feel it necessary to live near the village as they can be open about their sexuality without as much fear of backlash. Many in the gay community have expressed concern about the decline of the neighbourhood's appeal with youth and its loss of small businesses.[4]

Some feel that in the near future, Church Street may no longer be the "heart" of the gay community, yet others feel this has no validity at all, judging by the large crowds of gay men that are still prevalent on Church Street especially during the summer months, giving rise to debate over whether Toronto really needs an enclave for sexual minorities.[4] Some have noted that many small gay-owned businesses have moved to cheaper areas such as Parliament Street and Sherbourne Street, located east of Church and Wellesley. Parkdale and the Queen Street West areas have also become popular residential communities for local gays and lesbians, even earning the nickname of "Queer West Village" in recent years.[5]

The Wellesley subway station on the Yonge–University–Spadina line provides the community with access to Toronto's extensive subway system. Other stations that are within walking distance to the community include:

Bus and streetcar routes that provide transportation to the community include: