College is a subway station on the Yonge–University–Spadina line of the Toronto, Ontario, Canada subway that opened in 1954. It is located at 448 Yonge Street at College Street/Carlton Street. 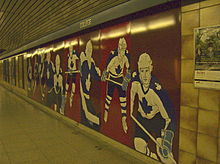 Part of Hockey Knights in Canada

The station features Hockey Knights in Canada, a pair of murals that are named after Hockey Night in Canada; one depicting the Maple Leafs on the southbound side and the facing one the Montreal Canadiens on the northbound side, depicting the decades-old rivalry between the two clubs. They were created by Charles Pachter in 1984, when the Toronto Maple Leafs still played at nearby Maple Leaf Gardens.

Before proceeding with the design, the TTC sought to obtain permission from both clubs. The Canadiens agreed as did Maple Leaf general manager Gerry McNamara. However, when Maple Leafs owner Harold Ballard learned of the plan to feature both teams, he refused permission to use the Leafs insignia unless plans for the Canadiens mural were scrapped. The TTC thus moved to remove the logos from the murals, until chairman Julian Porter, himself a lawyer knowledgeable on copyright issues, intervened and decided to take Ballard to court, believed that the artistic works could make free use of the logo even without Ballard's permission.[1] TTC commissioner June Rowlands also intervened insisting that all the players wear helmets, to set an example of safety for the city's youth.[2]

Subway infrastructure in the vicinity

North of the station, the tunnel turns off-street, paralleling Yonge Street to the east.

In early 2011 the TTC began work to re-install a double crossover south of the station. The crossover will allow trains to turn back at the station, allowing for more flexibility during emergencies[3]. The crossover had existed from the day the subway opened until the mid-1980s when it was removed due financial, maintenance and safety concerns and because it was not regularly used[4]. The original crossover was not powered or signalled, meaning that supervisory personnel had to be on scene to manually operate the switches, and ensure safe train passage. The new crossover will be fully integrated into the subway signalling system allowing for remote operation.

Nearby landmarks include the College Park mall, the College Park courts, the Residences of College Park, the Toronto Police Headquarters, and Maple Leaf Gardens. Some of the Ryerson University students also get off at this station, although majority of the campus is situated closer to the next station, Dundas.

A transfer is required to connect between the subway system and these surface routes: