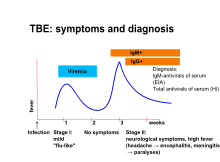 Tick-borne encephalitis (TBE) is a viral infectious disease involving the central nervous system. The disease most often manifests as meningitis, encephalitis, or meningoencephalitis. Although TBE is most commonly recognized as a neurological disorder, mild fever can also occur. Long-lasting or permanent neuropsychiatric sequelae are observed in 10-20% of infected patients.

The number of reported cases has been increasing in most countries.[1]

The virus is known to infect a range of hosts including ruminants, birds, rodents, carnivores, horses and humans. The disease can also be zoonotic, with ruminants and dogs providing the principal source of infection for humans.[2]

The virus can infect the brain (encephalitis), the meninges (meningitis) or both (meningoencephalitis).[3] In general, mortality is 1% to 2%, with deaths occurring 5 to 7 days after the onset of neurologic signs.

In dogs, the disease also manifests as a neurological disorder with signs varying from tremors to seizures and death.[2]

In ruminants, neurological disease is also present, and animals may refuse to eat, appear lethargic, and also develop respiratory signs.[2] 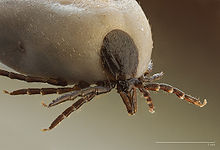 It is transmitted by the bite of several species of infected ticks, including Ixodes scapularis, Ixodes ricinus and Ixodes persulcatus,[4] or (rarely) through the non-pasteurized milk of infected cows.[citation needed]

The TBE virus may be present in a seronegative strain or subtype. In such cases a marker for TBE infection is elevated IFN-g in CSF.[citation needed]

Viral antigen can usually be found in brain tissue. Serological testing can also be performed with an ELISA.[2] 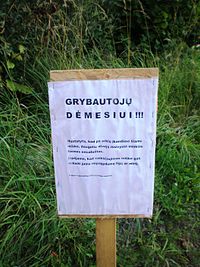 A sign in Lithuanian forest, warning about a high probability to be infected by Tick-borne encephalitis

The disease is incurable once manifested, so there is no specific drug therapy for TBE. Symptomatic brain damage requires hospitalization and supportive care based on syndrome severity. Anti-inflammatory drugs, such as corticosteroids, may be considered under specific circumstances for symptomatic relief. Tracheal intubation and respiratory support may be necessary, but infection can be reliably prevented by vaccination.