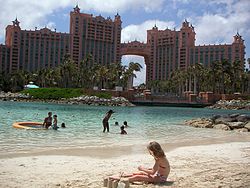 Miss Universe 2009, the 58th Miss Universe pageant, was held at the Atlantis Paradise Island, in Nassau, Bahamas on August 23, 2009.[1] It was the first time back to back victories in Miss Universe history: Stefanía Fernández of Venezuela, was crowned Miss Universe 2009 by outgoing titleholder Dayana Mendoza. 84 countries and territories competed for the title and the pageant was broadcasted live on NBC and Telemundo. On August 22, Jewel Selver representing Turks & Caicos withdrew from the pageant due to illness (dehydration). Only 83 contestants competed in the final on August 23.

Donald Trump had intentions on holding the 2009 pageant in Dubai, but backed out due to the political instability regarding relations between the United Arab Emirates and Israel and also for religious reasons.[2] Croatia was interested in hosting Miss Universe 2009 but they backed out of the project due to economic problems related to the current global economic crisis.[3] In July, investor Jonathan Westbrook tried to get Australia to host Miss Universe 2009 but his efforts were in vain as the possible venues were not interested.[4] Then, for the first time, the Bahamas became the official host ot the Miss Universe pageant. The presentation show, rehearsals, dress rehearsal and the grand final took place at the main 3,650 seats convention ballroom of Atlantis Paradise Island, the Imperial Ballroom.

These were the judges for the preliminary competition:[6]

At the Preliminary Competition all contestants competed in the Swimsuit and Evening Gown categories as part of the selection for the top 15 finalists who will be revealed during the beginning of the two-hour live telecast of the 2009 Miss Universe Pageant live on NBC and Telemundo on Sunday, August 23.

The Preliminary Competition was hosted by Miss Universe 2008, Dayana Mendoza and Local Bahamas radio personality Ed Fields. London based singer Anthoney Wright performed his hit song "Wud if I Cud" during the competition.

This marked the first time the Miss Universe live telecast was introduced by Donald Trump.

84 contestants pre-taped the national costume introduction including Turks & Caicos – Jewel Selver. Top 15 were announced, followed by Dayana Mendoza sharing about her experiences as Miss Universe 2008. The Top 15 semi-finalists competed in the Swimsuit competition which Top 10 finalists completed in the Evening Gown competition. The televised audiences could see the judges' average combined scores. Before announcing the finalists, there were two special awards – Miss Congeniality and Miss Photogenic were given. Both two Asian claimed all the special awards - Wang Jingyao of China and Chutima Durongdej of Thailand. Dayana Mendoza revealed that the new Miss Universe crown was the "Peace" model. The Top 5 finalists completed in the final question round. The 4 runner-ups were announced first, followed by the new Miss Universe 2009 – Stefanía Fernández.

The pageant was also historically significant, using Skype for the first time for the final question. Mayra Matos representing Puerto Rico was asked by Miss Universe 2007 Riyo Mori from Japan via Skype.

a Great Britain changed name to UK in 2008; this year changed back to Great Britain, which was last used in 2000.
b Turks & Caicos: Jewel Selver withdrew from the competition 24 hours before the final claiming she was suffering from dehydration.[45]

On August 1, 2009 Bolivian officials stated that it could present a legal challenge to the organizers of Miss Universe due to the planned use of a typical Diablada costume by the Peruvian candidate Karen Schwarz. Pablo Groux, Bolivian minister of Culture, said that any use of the costume by Schwarz in the contest would be an unlawful appropriation of Bolivian heritage and threatened to bring the case to the International Court of Justice. El Comercio, a Peruvian newspaper, mentioned that this is not the first time the diablada costume is shown in the contest and that it was María Josefa Isensee, a Chilean, that first used it in the Miss Universe contest. The Peruvian foreign minister José Antonio García Belaúnde said that since the diablada dress is of indigenous Aymara origin it can not be considered exclusive of any of the countries where Aymaras lives.[46][47]

Some of the delegates participated in other competitions:

These are some of the networks outside the United States (telecasted on NBC and Telemundo) that showed the 2009 Miss Universe pageant live (or recorded earlier) in their respective countries and territories:

Ratings in the United States

In the United States, the Miss Universe telecast (by NBC) grew from the first half of the show to the fourth and final, increasing in rating by 73% among audiences ages 18 to 49 (from 1,5/4 to a 2,6/7). The second hour of the pageant beat combinated ratings from ABC (which aired a new episode - "Rubicon" - from now-cancelled sci-fi series Defying Gravity) and CBS (which aired a rerun of Cold Case episode "Libertyville"), ratings in adults, men and women ages 18 to 34 and 18 to 49.[50]