National Cycle Route 4 (or NCR 4) is a route of the National Cycle Network, running from London to Fishguard. Between London and Fishguard, the route runs through Reading, Bath, Bristol, Newport, Swansea, Llanelli and St David's. Within Wales, NCR 4 forms one of the branches of the Celtic Trail cycle route.

The route covers a range of roads, cycle paths, and shared use paths.

The Reading to Bath section follows the Kennet and Avon Canal. Some sections use the canal towpath, while others are on low traffic roads. There is a proposed link from the NCR 4 to the National Cycle Route 24, linking to the planned Two Tunnels Greenway. This would provide an alternate route, providing a quicker way around Bath. 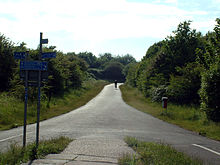 The Bath to Bristol section of the route follows the Bristol & Bath Railway Path, a dedicated cycle path on a disused railway line. This is entirely off road.

After passing through Bristol city centre, the route heads north into South Gloucestershire, and over the Severn Bridge. Passing through Chepstow, it then goes south, passing through Caldicot before arriving in Newport. The route passes to the north of the Newport Wetlands Reserve and across Newport Transporter Bridge in the south of the city.

After Newport, the route heads west to Caerphilly, then north towards Pontypridd during which it crosses the Taff Trail. It then heads west towards Port Talbot. Near Briton Ferry, it crosses the A48 bridge and then follows the A483 road (Fabian Way) into Swansea and passes through the Maritime Quarter. Just before the Maritime Quarter, it crosses National Cycle Route 43. It then follows the seafront promenade along Swansea Bay to Blackpill where it turns north up the Clyne Valley cycle track passing the village of Dunvant until it reaches Gowerton. In Gowerton, the trail follows public roads to the south of Loughor towards the Loughor bridge. Once over the Loughor bridge it continues along the Millennium Coastal Path to the south of Llanelli. 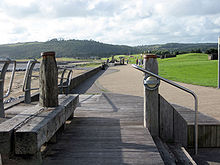 NCR 4 follows the Millennium Coastal Path along the south Carmarthenshire coast. Between Pembroke and Haverfordwest, NCR follows the route of a disused railway called the Brunel Trail and crosses over the Cleddau Bridge.