Mangotsfield is a village in South Gloucestershire, England, situated north of the Bristol suburb of Kingswood, bounded to the north by the M4 motorway and to the east by the Emersons Green housing estate.

The village was mentioned in the Domesday Book in 1086 as Manegodesfelle. St James's Church was originally 13th century but was altered in 1812 by James Foster of Bristol and again in 1851 by Pope, Bindon and Clarke. Rodway Hill House is 16th century.

In the centre of the village there used to be small village green, but it has been replaced by a large pavement, car parking and some local shops. Over the last decade the development of the Emersons Green housing estate has given rise to a large amount of traffic in the village.

Mangotsfield railway station on the former Midland Railway line was closed in 1966. It was the junction on the main line between Bristol and Gloucester for the branch line that ran to Bath Green Park and on to the Somerset and Dorset Joint Railway to Bournemouth. The playwright and actor Arnold Ridley, famous for portraying the part of Private Godfrey in the BBC comedy Dad's Army, reputedly got the idea for his famous play The Ghost Train whilst waiting at the deserted station to catch a train in the early 1920s.

Mangotsfield is the home of Mangotsfield United F.C. and Cleve R.F.C. Rodway Hill is a favourite spot for dog walkers and the starting point of many pigeon races.[1]

There is one secondary school in Mangotsfield: Mangotsfield School (A Specialist College in Engineering and Science).

The Cossham Street site was demolished in 1996 to make way for the Emersons Green housing estate. The whole school was brought onto an expanded Rodway site. In 1997, whilst excavating the old school field, archaeologists made an important discovery when they unearthed a sarcophagus containing the remains of two people; one of them is thought to be a high-ranking Roman official. The sarcophagus is displayed in Bristol City Museum.

Francis Greenway, a transported convict who became a prominent architect in Sydney, New South Wales, and whose image appeared on the first Australian decimal-currency $10 note in 1966, was born here in 1777. 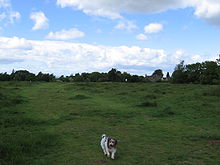 The village was mentioned in the Domesday Book in 1086 as Manegodesfelle. [2] St James's Church was originally 13th century but was altered in 1812 by James Foster of Bristol and again in 1851 by Pope, Bindon and Clarke. Rodway Hill House is 16th century.

In the 1870s the Imperial Gazetteer of England & Wales by John Marius Wilson said about Mangotsfield:

There are numerous good residences. Pennant stone is worked in the N; and the coal tract of Kingswood adjoins the S. There was anciently a nunnery; and remains of it existed in the time of Leland. The living is a vicarage, united with the chapelry of Downend, in the diocese of Gloucester and Bristol. Value, £251. Patron, the Rev. A. Peache. The church was mainly rebuilt in 1850: is in the pointed style; and consists of nave, N aisle, chantry, and chancel, with tower and spire. A chapel of ease, with 1,020 sittings, is at Downend. There are chapels for Independents, Baptists, and Wesleyans, two national schools, an infant school, and an Independent day school. A police station is at Staplehill.

Mangotsfield was an ancient parish. It was reduced in 1894 by the creation of a Kingswood parish, with the rest forming a parish in Warmley Rural District. In 1927 a Mangotsfield urban district was set up in part of the parish, the remainder becoming the Mangotsfield Urban District Council parish. In 1972 Mangotsfield UD and Warmley RD were merged with the Kingswood UD to form Kingswood Borough, which was merged with Northavon in 1996 to form South Gloucestershire unitary district.