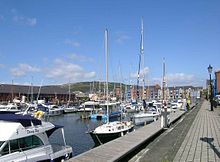 The Maritime Quarter, or Swansea Marina, is a residential area of Swansea, Wales, UK located immediately south of the city centre shopping core. It falls within Swansea's Castle ward. The area is bounded by Brynmill to the west, Swansea Bay to the South, the River Tawe to the east and the A4067 to the north.

The area comprises a mixture of housing ranging from 1980s low-rise apartment blocks around the old South Dock to town houses arranged in quadrangles in the south eastern part of the area, which were built in the 2000s. The Marina, is unusual in that planning approval was given on condition that a significant proportion of the development be sold to Housing Associations for social housing.

Formerly the South Dock, during the 1980s it underwent significant brownfield re-development in the early 1980s with the building of many low rise apartment blocks in the area around the South Dock. On the site of the Sainsbury's superstore, once stood the Weaver building. Built in 1897 by the French architect François Hennebique It was used for corn storage and it was the first steel reinforced concrete building built in Europe.[1]

Originally the city council decided to fill in the South Dock. This was done by a developer whose brother was a councillor at the local council. Later on, the same company was paid to dig out the South Dock again to create the marina. The developer is now imprisoned in Swansea Prison.

The re-excavated South Dock was laid out into the award-winning Maritime Quarter by architect Robin Campbell, then head of Environmental Design at Swansea Council. The brief was to make the area an extension of Swansea City centre, and not a separate suburb, and to work in walk ways through the overall development being created by numerous building companies. Campbell also worked in partnership with the developers to incorporate art designed by local artists into the buildings, and the creation of an observatory.

The South Dock itself now serves as marina, part of the Swansea Marina complex providing berths for privately-owned leisure boats. Sailing and sea angling schools are located in the area.

The water areas are not fully protected by railings. Local residents have often expressed concerns over the safety of the lack of railings and indeed, over the years, the marina has seen a number of people drowning after having fallen into the waters by accident.

The headquarters of the local South Wales Evening Post newspaper is located here. Beside the Evening Post building is the Associated British Ports building, now used as a five-star hotel. Just west of the marina is a four star Marriott hotel. A waterside walkway to the north-east of the marina is home to a few cafes, pubs and arcades. On the far western end of the Maritime quarter is the Civic Centre which houses government offices of the City and County of Swansea council.

Located in the area are:

The square surrounded by the National Waterfront Museum, the old Pump House and shopping area contains a statue of Dylan Thomas. 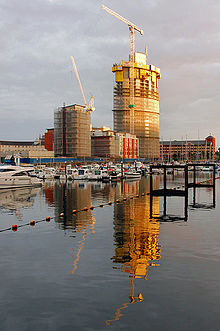 Meridian Quay is a £50 million high density commercial and residential development currently under construction. The development will add 291 apartments to the Maritime Quarter area. The most significant part of the development is the 29 storey tower, which will become the tallest building in Wales. There will be four smaller towers of 9/10 storeys and a few 6 storey blocks. The area in the immediate vicinity will be developed into public space, including the new Meridian Square.[2]

Swansea point is a new £80 million seafront residential development, by Persimmon Homes, in the south eastern corner of the area adjacent to the riverside and the seafront. The developments consist of a number of flats and townhouses along with a public car park. The seafront promenade has been extended from the existing residential areas to the west to be connected up with a path beside the River Tawe.[3] The most prominent feature of the Swansea Point development is the 14 storey Aurora tower located adjacent to the Tawe estuary near the Swansea Bay barrage.[4] There are currently proposals by OpCo to construct a 5 storey 164 bedroom hotel in the land adjacent to the Aurora tower.[5]

There are plans to redevelop the area on the west bank of the River Tawe served by the Sailbridge in a development called Sailbridge Square. The development will include an open pedestrianised public square lined with small businesses and restaurants.[6]