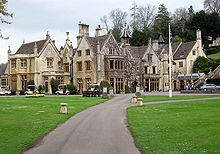 The four-star Manor House Hotel at Castle Combe, Wiltshire, England. Built as a private house, and dating originally from the fourteenth century, the hotel has 48 rooms and 1.5 km² (365 acres) of gardens.

Stars are often used as symbols for classification purposes. They are used by reviewers for ranking things such as movies, TV shows, restaurants, and hotels. For example, one to five stars is commonly employed to categorize hotels.

Restaurant guides and reviewers often use stars in restaurant ratings. The Michelin system reserves stars for exceptional restaurants, and gives up to three; the vast majority of recommended restaurants have no star at all. Other guides now use up to four or five stars, with one-star being the lowest rating. The stars are sometimes replaced by symbols such as a fork or spoon. Some guides use separate scales for food, service, ambiance, and even noise level.

The Michelin system remains the best known star system. A single star denotes "a very good restaurant in its category", two stars "excellent cooking, worth a detour", and three stars, "exceptional cuisine, worth a special journey".[1]

Michelin stars are awarded only for the quality of food and wine; the luxury level of the restaurant is rated separately, using a scale of one ("quite comfortable") to five ("luxury in the traditional style") crossed fork and spoon symbols. 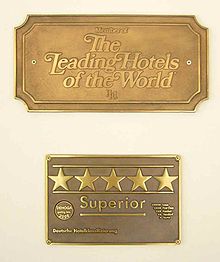 The AAA and their affiliated bodies use diamonds instead of stars to express hotel and restaurant ratings levels.

Hotels are independently assessed in traditional systems and rest heavily on the facilities provided. Some consider this disadvantageous to smaller hotels whose quality of accommodation could fall into one class but the lack of an item such as an elevator would prevent it from reaching a higher categorization.[2]

In recent years hotel rating systems have also been criticised by some who argue that the rating criteria for such systems are overly complex and difficult for laypersons to understand. It has been suggested that the lack of a unified global system for rating hotels may also undermine the usability of such schemes.

Food services, entertainment, view, room variations such as size and additional amenities, spas and fitness centers, ease of access and location may be considered in establishing a standard.

The more common classification systems include 'star' rating, letter grading, from 'A' to 'F', diamond or simply a 'satisfactory' or 'unsatisfactory' footnote to accommodation such as hostels and motels. Systems using terms such as Deluxe/ Luxury, First Class/ Superior, Tourist Class/ Standard, and Budget Class/ Economy are more widely accepted as hotel types, rather than hotel standards.

Some countries have rating by a single public standard - Belgium, Denmark, Greece, Italy, Malta, Netherlands, Portugal, Spain and Hungary have laws defining the hotel rating. In Germany, Austria and Switzerland the rating is defined by the respective hotel industry association using a five-star system - the German classifications are Tourist (*), Standard (**), Comfort (***), First Class (****) and Luxury (*****) with the mark Superior to flag extras beyond the minimum defined in the standard. The Swiss hotel rating was the first non-government formal hotel classification beginning in 1979[3] It did influence the hotel classification in Austria and Germany.[3] The formal hotel classification of the DEHOGA (German Hotel and Restaurant Association) started on 1. August 1996 and proved very successful (with 80% of guests citing the hotel stars as the main criteria in hotel selection) which lead to the creation of a common European Hotelstars rating system that started in 2010 (see below).[4]

In France, the rating is defined by the public tourist board of the department using a four-star system (plus "L" for Luxus) which has changed to a five-star system from 2009 on. In South Africa and Namibia, the Tourist Grading Council of South Africa has strict rules for a hotel types granting up to 5 stars.

The HOTREC (Hotels, Restaurants & Cafés in Europe) is a umbrella organization for 39 associations from 24 European countries. On the conference in Bergen 2004 the partners sketched a hotel classification system in order to harmonize the national standards. In 2007 the HOTREC launched the European Hospitality Quality scheme (EHQ) which has since accredited the existing national inspection bodies for hotel rating.

Under the patronage of HOTREC the hotels associations of Austria, Czech Republic, Germany, Hungary, Netherlands, Sweden and Switzerland have created the Hotelstars Union.[5] On 14 September 2009, the Hotelstars Union classification system was decided and pronounced on a conference in Prague. Since January 2010 the system is effective in most of these countries, Hungary will provide the legal provisions in 2010, Switzerland will switch to the new system in 2011 based on the regular 5 year cycle, and the Netherlands will switch in 2011 for similar reasons.

The Hotelstars Union classification defines the same levels as the earlier German classification system with five stars and Superior mark to flag extras. Instead of a strict minimum in room size and required shower facilities (e.g. a bath tub in a four-star hotel) there is a catalogue of criteria with 21 qualifications encompassing 270 elements where some are mandatory for a star and others optional. For hotels with three to five stars, the Hotelstars Union will use "mystery guests" to check the service quality regularly.

It has been considered that, as it has been the case in other areas (e.g. international accounting standards), hotel classification standards should result from a private and independent initiative. This may be the case of the World Hotel Rating (WHR) project, which notably aims to set international classification standards and rating criteria along the lines of a world star-rating system. It will also establish an information platform on the hotel industry which will be multilingual and multicultural. WHR intends to play a key role in the development of quality hotel services, as well as equitable and sustainable tourism, and the protection of the world's cultural and natural heritage. In addition, WHR will develop labels to promote hotels distinguished by specific features, such as a family and child-friendly disposition. A test period was scheduled for 2010.

In Britain, hotels are rated from one-star to five stars, as in many other countries. The RAC pulled out of accommodation grading in 2008 so the only grading schemes in operation are those operated by the AA (Automobile Association) and the national tourist boards; Visit England, Visit Wales, the Scottish Tourist Board and the Northern Ireland Tourist Board. The schemes were all 'harmonised' to ensure consistency between the schemes. This applies to all accommodation types apart from Self Catering that the AA have recently (2009) started offering. The AA criteria is available on its website.[6] In addition to the usual black stars (ranging from one (the lowest) to five (the highest), the AA awards red stars to the highest-rated, which are deemed 'Inspectors' Choice'. Each of the national tourist boards have grading explanations on their web sites.

Some members of the hospitality industry have claimed a six or seven-star rating for their operation. As no organization or formal body awards or recognizes any rating over five-star deluxe,[7] such claims are meaningless and predominantly used for advertising purposes. The Burj Al Arab hotel in Dubai is widely described as a "seven-star" property, but the hotel says the label originates from an unnamed British journalist on a press trip and that they neither encourage its use nor do they use it in their advertising.[8]

The European Hotelstars Union has created a profiling system based on the earlier German hotelstars system that had widely influenced the hotel classifications in central Europe. The main criteria are in quality management, wellness and sleeping accommodation.[9] In the catalogue of criteria each entry is associated with a number of points - each Hotelstars level requires a minimal sum of points besides some criteria being obligatory for the level.[10] The minimum requirement for the Superior flag requires the same sum of points as for the next Hotelstars level which however was not awarded due to at least one obligatory requirement being left out.[10]

The most senior military ranks in all services are classified by a star system in many countries, ranging from one-star rank which typically corresponds to brigadier, brigadier general, Commodore or air commodore, to the most senior five-star ranks which include Admiral of the Fleet, Grand Admiral, Field Marshal, General of the Army and Marshal of the Air Force which typically only exist during large scale conflicts.

Recruits entering American college football are commonly ranked on a five-star scale, with five representing what scouts think will be the best college players.

International organisations use a star rating to rank the safety of transportation. EuroRAP have developed a Road Protection Score which is a scale for Star Rating roads for how well they protect the user from death or disabling injury when a crash occurs. The assessment evaluates the safety that is 'built in' to the road through its design, in combination with the way traffic is managed on it.[11] The RPS protocol has also been adapted and used by AusRAP, usRAP and iRAP.

EuroNCAP awards 'star ratings' based on the performance of vehicles in crash tests, including front, side and pole impacts, and impacts with pedestrians.