This section runs from Colchester and National Cycle Route 1 to Harwich, where a seasonal foot ferry can be caught to Suffolk where the route continues.

For much of its length it is also the route of the North Sea Cycle Route, although this branches off at a park in Dovercourt to head to the Harwich International Port at Parkeston where there is access via ferry to Europe.

The route from Harwich to Felixstowe uses the Harwich Harbour Ferry (summer only, check timetable) to Langard Point offering an impressive view of The Port of Felixstowe.

On the Felixstowe side the ferry lands near Landguard Fort which is rich with history. The route then heads along the sea front into the centre of Old Felixstowe itself, a Victorian seaside town.

From Felixstowe the route heads out of town though a residential area and then mainly along minor roads towards Ipswich. There is an 1400 metre section of the official route takes one along a dedicated cycletrack very close to the A14. For this section there is an alternative route that uses a narrow single track road further away from the A14 which is also used by motorists and buses. The route then heads through Statton Hall, Levington and Nacton into Ipswich via Landseer Park, Holywells Park and the new waterfront area, where the routes crosses National Cycle Route 1.

Alternatively from Felixstowe one can take the RCR41 up the coast through the Suffolk Coast and Heaths Area of Outstanding Natural Beauty.

This section of the route uses quiet roads passing the entrance to the Museum of East Anglian Life in Stowmarket, the village of Shelland and then through Thurston using a couple of off-road sections and finally into Bury St Edmunds using another section of off-road good cycle track running parallel with the road.

From late 2008/early 2009 part a section for the route west of Stowmarket will re-routed to take advantage changes to the A14 and will use a section of road that currently forms to Eastbound carriageway of the A14 at Haughley Bends[1] and which will be turned into a traffic free route for cylists, walkers and horse riders as shown on the official map[2] of the works.

Links to NCR 11 at Burwell and Cambridge 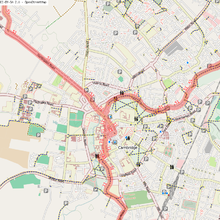 NCR 51 leaves Cambridge on the Huntingdon Road, routing north via Girton, Oakington, Longstanton, Swavesey, to Huntingon. NCR 51 diversion at Longstanton to Swavesey . At Huntingdon, it meets with NCR 6 for connections to Alconbury and Peterborough

NCR 51 is undefined between Huntingdon and Sandy

Between Sandy and Bedford, the off-road route follows the old Varsity Line converted railway, past Willington and the wetlands around Priory Marina, before arriving at the outskirts of Bedford where it follows the south bank of the River Great Ouse through parkland to the south end of Bedford Bridge. There is a bike shop with bike hire at Priory Marina.

From Bedford, the route follows the north bank of the River Great Ouse through town, passing under County Bridge at Prebend Street, and following a surfaced path along the river before crossing the river into Kempston at a footbridge.

This section is prone to flooding, and an alternative cycle route is available by crossing County Bridge and following Prebend Street south to the Bedford Road cycleway.

NCR 51 follows a split cycle path (pedestrians/cycles separated by solid white line) through Kempston, past a supermarket, and through alleyways to Ridgeway School. 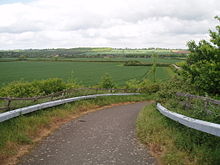 Section from Marston Moretaine to Cranfield

From the limits of Kempston, there is a well-marked route on roads, crossing the Bedford western bypass (under construction as of 2008), via Wootton to Marston Moretaine

The route travels through the Forest of Marston Vale (bike hire in the Forest centre) where there is a cycleway connecting with Millbrook railway station.

From the Forest of Marston Vale, NCR 51 takes residential roads, tracks, and bridleways to Cranfield

At Cranfield, there are no further NCR signs westbound until Salford, where the route crosses the M1 towards Wavendon and Woburn Sands. 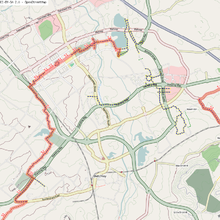 NCR 51 is undefined between Wavendon and Milton Keynes 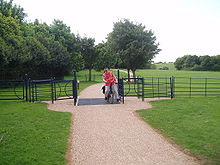 2 km east of Milton Keynes, the cycle route goes around the south edge of Willen reservoir (where there is some bike hire, tourist attractions etc.) and through Campbell Park to enter Milton Keynes at Midsummer Boulevard

It meets NCR 6 here, for connections to London and Northampton

From Milton Keynes Central railway station, the route goes over the railway on a pedestrian bridge, and follows paved routes in parkland past Furzton lake to the A421 junction with Buckingham Road. There is a cycleway here along Buckingham road to link with Bletchley railway station, and the NCR 51 continues southwest along bridleways.