Newmarket is a market town in the English county of Suffolk, approximately 65 miles (105 kilometres) north of London. It is generally considered the birthplace and global centre of thoroughbred horse racing, and a future UNESCO World Heritage Site. It is the largest racehorse training centre in Britain, and home to most major British horseracing institutions. Five British Champions Series races are held at Newmarket every year.

Newmarket has over fifty horse training stables, two large racetracks, The Rowley Mile and The July Course and one of the most extensive horse training grounds in the world. The town is home to over 3,000 racehorses, and it is estimated that one in every three local jobs is related to horse racing. The town is home to the National Horseracing Museum, Tattersalls, the racehorse auctioneers and two of the world's foremost equine hospitals for horse health. The town is surrounded by over sixty horse breeding studs.

Racing at Newmarket has been dated as far back as 1174, making it the earliest known racing venue of post-classical times. King James I (reigned 1603–1625) greatly increased the popularity of horse racing there, and King Charles I followed this by inaugurating the first cup race in 1634. The Jockey Club's clubhouse is in Newmarket, though its administration is based in London. In 1967 Queen Elizabeth II opened The National Stud, a breeding centre for thoroughbred horses.

Around 3,000 race horses inhabit Newmarket. By comparison, the human population is of the order of 15,000 and it is estimated that one in three jobs are connected to horseracing in one way or another[citation needed] Newmarket has 3 main sections of Heath, all of which are used to train the racehorses on. "Racecourse side" is located next to the Rowley Mile Racecourse and is a predominately flat area. "Warren Hill" overlooks the town and consists of 3 all weather canters and a multitude of grass canters. "Bury Side" is the name given to the area located near the Bury Road and the railway line. These areas and the surrounding heath is chalk downland and has special birds and animals only suited to this terrain. It is also a very historical area with the remains of 6th century living[citation needed] This hill is part of the chalk formation the Newmarket Ridge.

Most of the Newmarket-based racing stables are situated in the centre of the town, where they can easily access the gallops. The town has special horse routes so the horses can reach the gallops safely from the many training establishments occupied by top trainers. Outside the town the land-use is dominated by thoroughbred breeding, studs occupying large areas in every direction. Around 70 licensed trainers and more than 60 stud farms operate in and around Newmarket.[1] Dalham Hall Stud (the headquarters of Darley), Cheveley Park Stud (which local lore claims was once owned by King Canute), and Banstead Manor Stud (Headquarters of Juddmonte Farms) are well-known examples all which can be found in the village of Cheveley, three miles (5 km) from Newmarket. 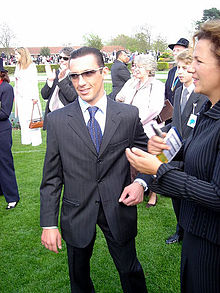 Local celebrity jockey Frankie Dettori in the parade ring at Newmarket after riding in the 2005 2,000 Guineas.

The town has two race courses situated on Newmarket Heath, these are the Rowley Mile and the July Course. The two courses are separated by the Devil's Dyke. This large earthwork starts in neighbouring Woodditton (sometimes spelt as Wood Ditton) and ends in Reach, a distance of over 8 miles (13 km).

The development of painting on sporting themes in the early eighteenth century was centred on the Newmarket Racecourse and the three founders of the sporting school, John Wootton, James Seymour and Peter Tillemans, painted many scenes of the racecourse and its environs.[2]

The Save Historic Newmarket group, an organisation dedicated to maintaining the town's unique heritage as the world headquarters of racing, has become increasingly vocal in recent years.[3] The group, composed of local residents, supports sustainable development in the town and aims to make Newmarket a more attractive destination for visitors.

Newmarket railway station is on the Cambridge - Bury St. Edmunds - Ipswich rail line, formerly belonging to the Great Eastern Railway (later part of the LNER). Newmarket's first railway was a line built by the Newmarket and Chesterford Railway and opened in 1848 (known as the "Newmarket Railway"). It branched off the London - Cambridge main line at Great Chesterford and ran about 15 miles (24 km) north eastwards. There was an attractive terminus in Newmarket, with intermediate stations at Bourne Bridge, Balsham Road and Six Mile Bottom.

Three years later the first nine miles (14 km) or so of this line, the stretch from Great Chesterford to Six Mile Bottom, was superseded by a more viable section linking Six Mile Bottom directly with Cambridge, and so the Great Chesterford - Six Mile Bottom section closed in 1851, one of the earliest closures in British railway history (the former Bourne Bridge station is believed to have been partly incorporated into a public house just across the road from a station opened later on another line - Pampisford, on the now-closed Cambridge - Haverhill - Sudbury route). With the development of other rail lines the Newmarket terminus was replaced by the present through station in 1902; it was used as a goods station until 1967 and demolished in 1980.[4]

A short distance to the north east is the 1,100 yard Warren Hill tunnel. North of the tunnel, a separate station, Warren Hill, was built for raceday use.

In late 2006, Newmarket introduced a Park and Ride service running from Studlands industrial estate to the town centre, whilst at the same time parking charges were introduced to the town.

The area of Suffolk containing Newmarket is nearly an exclave, with only a narrow strip of territory linking it to the rest of the county. Historically the town was split with one parish - St Mary - in Suffolk, and the other - All Saints - in Cambridgeshire. The Local Government Act 1888 made the entirety of Newmarket urban sanitary district part of the administrative county of West Suffolk.[5]

The 1972 Local Government Bill as originally proposed would have transferred the town (and Haverhill) to Cambridgeshire. The Local Government Commission for England had suggested in the 1960s that the border around Newmarket also be altered, in West Suffolk's favour. Newmarket Urban District Council supported the move to Cambridgeshire, but ultimately the government decided to withdraw this proposal and keep the existing boundary, despite intense lobbying from the UDC.[6]

Unlike most of England, which operates a two tier school system, state education in Newmarket and its catchment area is a three-tier system. Newmarket College takes pupils at age 13 from two middle schools, Scaltback Middle School and St Felix CEVC Middle School. In the summer of 2008, St Felix suffered a major fire.[7]. There are four primary schools in the town which educate children until age 9.[8] Suffolk County Council is undertaking school reorganisation across the county. This will see the closure of middle schools in the town by September 2012 with children transferring to the upper school at age 11.[9]

Newmarket is home to both an Air Training Corps Unit and an Army Cadet section.