Events from the year 2005 in Canada. This year was recognized, by Veterans Affairs Canada, as the Year of the Veteran.[1] 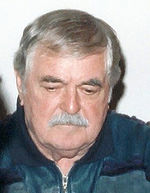