Shallow dams and reservoirs are susceptible to outbreaks of toxic algae, especially if the water is warmed by a hot sun. The bacteria grow from stormwater runoff carrying fertilizer into the river where it acts as a nutrient for the algae. Such outbreaks render the water unfit for human consumption.

Virtually all large systems must treat the water; a fact that is tightly regulated by global, state and federal agencies, such as the World Health Organization (WHO) or the United States Environmental Protection Agency (EPA). Water treatment must occur before the product reaches the consumer and afterwards (when it is discharged again). Water purification usually occurs close to the final delivery points to reduce pumping costs and the chances of the water becoming contaminated after treatment.

Traditional surface water treatment plants generally consists of three steps: clarification, filtration and disinfection. Clarification refers to the separation of particles (dirt, organic matter, etc.) from the water stream. Chemical addition (i.e. alum, ferric chloride) destabilizes the particle charges and prepares them for clarification either by settling or floating out of the water stream. Sand, anthracite or activated carbon filters refine the water stream, removing smaller particulate matter. While other methods of disinfection exist, the preferred method is via chlorine addition. Chlorine effectively kills bacteria and most viruses and maintains a residual to protect the water supply through the supply network. 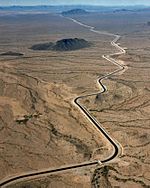 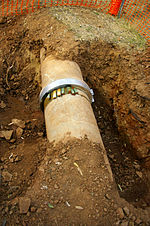 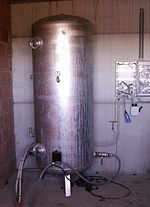 The product, delivered to the point of consumption, is called fresh water if it receives little or no treatment, or drinking water if the treatment achieves the water quality standards required for human consumption.

Once treated, chlorine is added to the water and it is distributed by the local supply network. Today, water supply systems are typically constructed of plastic, ferrous, or concrete circular pipe. However, other "pipe" shapes and material may be used, such as square or rectangular concrete boxes, arched brick pipe, or wood. Near the end point, the network of pipes through which the water is delivered is often referred to as the water mains.

The energy that the system needs to deliver the water is called pressure. That energy is transferred to the water, therefore becoming water pressure, in a number of ways: by a pump, by gravity feed from a water source (such as a water tower) at a higher elevation, or by compressed air.[1]

In small domestic systems, the water may be pressurised by a pressure vessel or even by an underground cistern (the latter however does need additional pressurizing). This eliminates the need of a water-tower or any other heightened water reserve to supply the water pressure.

These systems are usually owned and maintained by local governments, such as cities, or other public entities, but are occasionally operated by a commercial enterprise (see water privatization). Water supply networks are part of the master planning of communities, counties, and municipalities. Their planning and design requires the expertise of city planners and civil engineers, who must consider many factors, such as location, current demand, future growth, leakage, pressure, pipe size, pressure loss, fire fighting flows, etc. — using pipe network analysis and other tools. Constructioncomparable sewage systems, was one of the great engineering advances that made urbanization possible. Improvement in the quality of the water has been one of the great advances in public health.

As water passes through the distribution system, the water quality can degrade by chemical reactions and biological processes. Corrosion of metal pipe materials in the distribution system can cause the release of metals into the water with undesirable aesthetic and health effects. Release of iron from unlined iron pipes can result in customer reports of "red water" at the tap . Release of copper from copper pipes can result in customer reports of "blue water" and/or a metallic taste. Release of lead can occur from the solder used to join copper pipe together or from brass fixtures. Copper and lead levels at the consumer's tap are regulated to protect consumer health.

Utilities will often adjust the chemistry of the water before distribution to minimize its corrosiveness. The simplest adjustment involves control of pH and alkalinity to produce a water that tends to passivate corrosion by depositing a layer of calcium carbonate. Corrosion inhibitors are often added to reduce release of metals into the water. Common corrosion inhibitors added to the water are phosphates and silicates.

Maintenance of a biologically safe drinking water is another goal in water distribution. Typically, a chlorine based disinfectant, such as sodium hypochlorite or monochloramine is added to the water as it leaves the treatment plant. Booster stations can be placed within the distribution system to ensure that all areas of the distribution system have adequate sustained levels of disinfection.

Like electric power lines, roads, and microwave radio networks, water systems may have a loop or branch network topology, or a combination of both. The piping networks are circular or rectangular. If any one section of water distribution main fails or needs repair, that section can be isolated without disrupting all users on the network.

Most systems are divided into zones. Factors determining the extent or size of a zone can include hydraulics, telemetry systems, history, and population density. Sometimes systems are designed for a specific area then are modified to accommodate development. Terrain affects hydraulics and some forms of telemetry. While each zone may operate as a stand-alone system, there is usually some arrangement to interconnect zones in order to manage equipment failures or system failures.