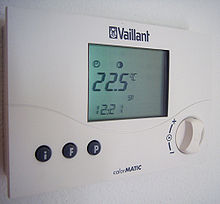 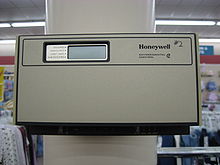 Honeywell electronic thermostat in a store

Heating and cooling losses from a building (or any other container) become greater as the difference in temperature increases. A programmable thermostat allows reduction of these losses by allowing the temperature difference to be reduced at times when the reduced amount of heating or cooling would not be objectionable.

For example, during cooling season, a programmable thermostat used in a home may be set to allow the temperature in the house to rise during the workday when no one will be at home. It may then be set to turn on the air conditioning before the arrival of occupants, allowing the house to be cool upon the arrival of the occupants while still having saved air conditioning energy during the peak outdoor temperatures. The reduced cooling required during the day also decreases the demands placed upon the electrical supply grid.

Conversely, during the heating season, the programmable thermostat may be set to allow the temperature in the house to drop when the house is unoccupied during the day and also at night after all occupants have gone to bed, re-heating the house prior to the occupants arriving home in the evening or waking up in the morning. Since most people sleep better when a room is cooler and the temperature differential between the interior and exterior of a building will be greatest on a cold winter night, this reduces energy losses.

Similar scenarios are available in commercial buildings, with due consideration of the building's occupancy patterns.

The most basic clock thermostats may only implement one program with two periods (a hotter period and a colder period), and the same program is run day after day. More sophisticated clock thermostats may allow four or more hot and cold periods to be set per day. Usually, only two distinct temperatures (a hotter temperature and a colder temperature) can be set, even if multiple periods are permitted. The hotter and colder temperatures are usually established simply by sliding two levers along an analogue temperature scale, much the same as in a conventional (non-clock) thermostat.

This design, while simple to manufacture and relatively easy to program, sacrifices comfort on weekends since the program is repeated each of the seven days of the week with no variation. To overcome this deficit, a push-button is sometimes provided to allow the user to explicitly switch (once) the current period from hot period to a cold period or vice-versa; the usual use of this button is to over-ride a "set back" that takes place during the workday when the home is normally unoccupied.

The clock mechanism is electrical, and two methods have commonly been used to drive it: 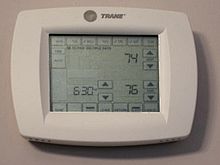 Digital thermostats may implement the same functions, but most provide more versatility. For example, they commonly allow setting temperatures for two, four, or six periods each day, and rather than being limited to a single "hotter" temperature and a single "colder" temperature, digital thermostats usually allow each period to be set to a unique temperature. The periods are commonly labeled "Morning", "Day", "Evening", and "Night", although nothing constrains the time intervals involved. Digital thermostats usually allow the user to override the programmed temperature for the period, automatically resuming programmed temperatures when the next period begins. A function to "hold" (lock-in) the current temperature is usually provided as well; in this case, the override temperature is maintained until the user cancels the hold or a programmed event occurs to resume the normal program. More-sophisticated models will allow for the release of the hold to take place at a set time in the future.

As with clock thermostats, basic digital thermostats may have just one cycle that is run every day of the week. More-sophisticated thermostats may have a weekday schedule and a separate weekend schedule (so-called "5-2" setting) or separate Saturday and Sunday schedules (so-called "5-1-1" settings), while other thermostats will offer a separate schedule for each day of the week ("7 day" settings). The selection of which days are defined as the "weekend" is arbitrary, depending on the user's heating and cooling schedule requirements. Often, a manufacturer will sell three similar thermostats offering each of those levels of functionality, and there is no obvious difference in the thermostats other than the factory programming and the price.[5]

Most digital thermostats have separate programs for heating and cooling, and may feature a digital or manual switch to turn on the furnace blower for air circulation, even when the system isn't heating or cooling. More-sophisticated models may be programmed to run the circulating fan for a brief 5-10 minute period in the event a heating or cooling cycle has not taken place during the previous hour. This is particularly useful in buildings subject to stratification where without frequent air circulation, hot air rises and separates from the cooler air that falls.

Some digital thermostats have the capability of being programmed using a touch-tone telephone or over the Internet.

Digital thermostats are usually powered one of three ways:

More expensive models have a built-in PID controller, so that the thermostat learns how the system will react to its commands. Programming the morning temperature to be 21° C at 7:00 AM, for instance, makes sure that at that time the temperature will be 21° C. A standard programmable thermostat would simply start working toward 21° at 7:00 AM. The PID controller decides at what time the system should be activated in order to reach the desired temperature at the desired time. It knows this by remembering the past behavior of the room, and the current temperature of the room. This is called optimal start.

It also makes sure that the temperature is very stable (for instance, by reducing overshoots at the end of the heating cycle) so that the comfort level is increased.