Dollar Bank is a full service, regional bank serving both individuals and business customers, operating more than 50 branch offices and loan centers throughout the southwestern Pennsylvania and northeastern Ohio metropolitan areas. The bank’s Pennsylvania headquarters is located in downtown Pittsburgh and Ohio headquarters is located in downtown Cleveland. Dollar Bank was the largest independent mutual bank in the nation as at March 2009.[3][4],

The Dollar Savings Bank’s Fourth Avenue Building was opened in March 1871[5] and is still in operation today. The architect was Isaac H. Hobbs & Sons of Philadelphia. The building was constructed using 1,400 tons of brownstone, quarried in Connecticut, pink Quincy Granite and significant amounts of Marble and Brass.

In 1871, two stone lions were placed at the front door of the Fourth Avenue Building, as symbols of guardianship of the people’s money[5]. The stately lions guarding the entrance were sculpted by Max Kohler[5], each from a single block of quarry-bedded brownstone. A project to restore the lions began in September 2009[6][7].

In 1906, the East and West wings were added to The Dollar Savings Bank’s Fourth Avenue Building[5].

During the 1930s, the main lobby was redecorated[5]. Lighting fixtures were replaced, the teller counter altered and the interior repainted.

The vault was installed after the St. Patrick’s Day Flood of 1936, which devastated downtown Pittsburgh. The Dollar Savings Bank wanted a new vault that was not only fireproof but also flood-proof. The Dollar Savings Bank bought the Boyd Building in February 1950[5]. The bank used the first two floors of the space and the rest of the building was leased[5].

In 1956, The Dollar Savings Bank purchased the DeRoy Building and converted the first floor for bank use, expanding the Fourth Avenue Building footprint[5]. This building was demolished in 1970 and the space became a pedestrian plaza.

In the 1960s, Fourth Avenue Building’s cupola skylights were filled in, the interior was repainted and the teller counter was altered to make it one level surface[5].

The Dollar Savings Bank opened its first branch office on June 29, 1961 in the Oliver Building and entered the computer age with its first online electronic bank accounting system in Pennsylvania and one of the first ten in the United States on November 30, 1964[5].

The first Dollar Bank Loan Center was opened in Murrysville, Pennsylvania on January 18, 1994[5]. Dollar Bank's "Win-Win Home Equity Adjustable Rate Loan" was launched as the first loan of its kind in March 1994[5]. Dollar Bank became the 16th bank in the country to offer online banking via the Internet in March 1997[5]. Dollar Bank initiates the "Freedom ATM Alliance" surcharge free network, a group of 29 banks that joined together on January 4, 1999[5]. The goal of the Alliance is to provide surcharge-free ATM alternatives to customers. Banks entering the Alliance agree not to surcharge the customers of any other Alliance member at their ATMs.

On April 6, 1998, the Dollar Bank online banking service was inducted into the 1998 Computerworld Smithsonian Innovation Collection[5]. There has also been consistent participation in the United Way of America and significant local efforts surrounding the branch network in the Allegheny, Westmoreland, Washington and Butler counties in Pennsylvania, and Lake, Lorain, Cuyahoga and Summit counties in Ohio.

In 2000, Mortgages For Mothers seminars for low to moderate-income individuals were introduced[5]. Attendees learn about the various mortgage loan programs available to them and understand the importance and power of credit[8]. They also discuss their individual Credit reports with a credit professional[8]. Workshop attendees are encouraged to continue working with Dollar Bank home ownership counselors[8]. Assistance includes educational classes, private credit restoration counseling sessions, special savings programs and other informational and motivational group sessions[8].

On May 8, 2003, Dollar Bank introduced Pittsburgh’s Regional Showcase with a high definition, Multi-media format to the David L. Lawrence Convention Center[5]. The Showcase presents the region's history and culture, as well as its people, natural resources and amenities[5].

In January 2005, the Dollar Bank Certificate of Deposit (CD) Ladder was launched as the first CD of its kind[5]. Laddering is based upon the premise of not putting all money in a single CD. By dividing money between CD terms ranging from short to long, CDs with a range of yields that reflect market expectations for the future direction of interest rates are purchased.

Dollar Bank opened a new Ohio headquarters at The Galleria at Erieview in Cleveland, Ohio on July 28, 2008[4][5]. The new two-story, glass-enclosed structure at East Ninth and St. Clair measures 21,000 sq ft (2,000 m2).[4][5]. The new space houses a branch office, a Private Banking Center and a training facility on the first floor, with retail operational support on the second[4][5]. Opened in early August, the new facility anchors the Galleria and revitalized one of Cleveland's most prominent urban centers[4][5].

As of May 31, 2009, Dollar Bank's liquid assets, consisting of $86 million in cash and cash equivalents and $949 million in market value of securities available for sale, and $22 million in trading securities, stood at $1.1 billion or 24% of deposits.[13]

All financial institutions must meet certain minimum net worth requirements. Dollar Bank is considered “well capitalized,” the highest category of capitalization under the regulatory framework of the Office of Thrift Supervision. Dollar Bank’s core capital amounted to $559.8 million, an increase of $21.8 million over the previous year.[13]. It should be noted that both major market areas (Pittsburgh and Cleveland) have lost over 50% of their populations since 1950. 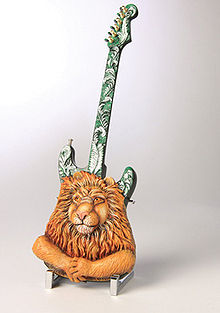 In June 2007, Dollar Bank participated in GuitarMania[5], a greater Cleveland community public art project that raised more than $1.6 million[5] for its two benefiting charities – United Way of Greater Cleveland and the Rock and Roll Hall of Fame and Museum’s education programs[5]. The project consisted of large, oversize Fender Stratocaster guitars that were creatively transformed into works of art by local artists and national celebrities and displayed on the city streets of Cleveland. The “Rock & Roar” Dollar Bank guitar is displayed in the Galleria Office at Dollar Bank’s Cleveland headquarters located in the Erieview Tower. 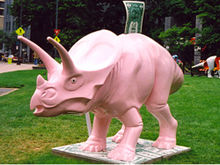 In the summer of 2003 as part of DinoMite Days, a citywide art event put together by the Carnegie Museum of Natural History and the city of Pittsburgh, Dollar Bank sponsored two dinosaurs, which were painted bright pink to replicate the classic ceramic pink piggy bank[5]. Complete with a money slot, these dinosaurs even had a dollar bill sticking out of the top[15]. They were located in the plaza area near 3 Gateway Center and on the corner of Fourth Avenue and Smithfield Street[15]. A total of one hundred dinosaurs appeared on street corners, green spaces, community centers and downtown plazas, everywhere across Pittsburgh. This public art event celebrated Pittsburgh’s international reputation for scientific excellence while showcasing emerging and established artists.

In 2009, Dollar Bank sponsored the Main Music Stage at the Three Rivers Arts Festival, a division of the Pittsburgh Cultural Trust, during the 50th anniversary of the festival[5].

Dollar Bank's official headquarters is currently at 3 Gateway Center in Downtown Pittsburgh.[17][18] Its old headquarters building at 340 Fourth Avenue in Pittsburgh is listed on the National Register of Historic Places.[1]