Benton Harbor is a city in Berrien County in the U.S. state of Michigan which is located west of Kalamazoo. The population was 10,038 at the 2010 census. It is the lesser populated of the two principal cities included in the Niles-Benton Harbor, Michigan Metropolitan Statistical Area, which has a total population of 156,813.[4]

Benton Harbor and the City of St. Joseph (which is located across the St. Joseph River) are known locally as the "Twin Cities". Fair Plain and Benton Heights are unincorporated areas adjacent to Benton Harbor.

Benton Harbor was founded by Henry C. Morton, Sterne Brunson and Charles Hull, who all now have or have had schools named after them.[5] Benton Harbor was mainly swampland bordered by the Paw Paw River, through which a canal was built, hence the "harbor" in the city's name.[6] In 1860, the village was laid out by Brunson, Morton, Hull and others, and given the name of Brunson Harbor.[7] In 1865 the name of the settlement was changed to Benton Harbor in honor of Thomas Hart Benton, a Missouri Senator who helped Michigan achieve statehood. In 1869, Benton Harbor was organized as a village and in 1891 was incorporated as a city.[7]

There were 3,767 households of which 42.0% had children under the age of 18 living with them, 20.8% were married couples living together, 42.0% had a female householder with no husband present, and 32.1% were non-families. 26.6% of all households were made up of individuals and 8.2% had someone living alone who was 65 years of age or older. The average household size was 2.91 and the average family size was 3.53.

The demographics of Benton Harbor contrast sharply with those across the river in St. Joseph.

The Michigan Treasury Department in 2009 sent a team to look into the city's finance. The team's report was a long list of mismanagement to the point that budgets were "effectively meaningless as a financial management tool." The city was $10 million under- funded in its pension fund and increasing budget deficits. In April 2010, Democratic Governor Jennifer Granholm appointed Joseph Harris as Emergency Financial Manager. City staff has been reduced by 30 to 70.[8]

Harris was given expanded powers under a new law signed in March 2011 by Republican Governor Rick Snyder.[1] Harris was previously the chief financial officer for the city of Detroit.[1] On April 14, 2011, Harris suspended the decision-making powers of Benton Harbor's elected city officials, who can hold meetings but are not allowed to govern.[1] The Michigan AFL-CIO president called the move "sad news for democracy in Michigan", but at least one city official, City Commissioner Bryan Joseph, was in favor of it, saying the city had been mismanaged for decades.[1]

Whirlpool Corporation has its corporate headquarters in nearby Benton Charter Township.[9][10] 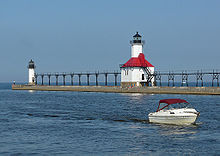 Race Relations Council of Southwest Michigan - The Council is dedicated to fostering interracial understanding, mutual respect, and cooperative action toward the elimination of barriers to racial equality.

The city is served by the Benton Harbor Area Schools[14] within the Berrien Regional Education Service Agency.[15]

The public school district serves the city of Benton Harbor and surrounding areas. For years a popular student gathering place was the Tiger Den restaurant across the street from the high school, before it closed. The school district has one high school, seven elementary schools, and two middle schools. In 2007, the district hired a new superintendent. Carole Schmidt replaced Dr. Paula Dawning. The hiring of Schmidt was notable because she left her job as superintendent of the St. Joseph Public School District. Schmidt is the first white superintendent of the Benton Harbor School District in decades.

The school board governs the school district. The current president is Dan McGinnis. There are three charter schools in the city of Benton Harbor: Benton Harbor Charter School,[16] Countryside Academy,[17] and Mildred C. Wells Academy.[18]

Until the consolidation done in the mid-1960s certain out-lying areas, such as Fairplain, had their own independent school districts.

Benton Harbor is served by The Herald-Palladium newspaper, whose offices are in nearby St. Joseph Township, and is part of the South Bend/Elkhart television market. It is served by sister radio stations WCXT, WCSY, WCSY-FM, WIRX, WSJM, WSJM-FM, and WYTZ, as well as WHFB, WHFB-FM, and some in the South Bend market. Additionally, most of the Chicago market TV and radio stations are available from 60 miles (97 km) across the lake.

Sites of interest in Benton Harbor are Shiloh House, built in 1910, which served as the administration building and men's dormitory for the House of David colony, a communal religious group; Morton House (on Morton Hill), built in 1849 by Eleazar Morton, which now houses a museum; Jean Klock Park on Lake Michigan; and the Golf Club at Harbor Shores. In neighboring Benton Township is a large fruit market which replaced the prior fruit market located in the "flats" area of Benton Harbor, which was torn down during an urban renewal project in 1967.[19][20]

An American Basketball Association team (ABA), the Twin City Ballers, played in Benton Harbor for a few games in November 2006, but left the city due to poor attendance at games. Another ABA team, the Lake Michigan Admirals, began play in 2009.

Benton Harbor is cohost of the annual Blossomtime Festival with St. Joseph.