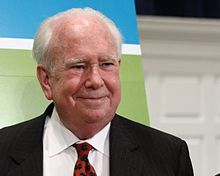 Peter Hamilton Raven (born June 13, 1936) is a botanist and environmentalist, notable as the longtime director, now President Emeritus, of the Missouri Botanical Garden.[1]

On June 13, 1936, Raven was born in Shanghai, China to American parents. An uncle of his father's was, for a time, one of the wealthiest Americans in China, but was later jailed in a banking scandal. That incident and Japanese aggression in China led the Raven family to return to San Francisco, CA in the late 1930s.

After teaching at Stanford University, Raven went on to become Director of the Missouri Botanical Garden in 1971, a position he continues to hold. Raven now teaches at Washington University in St. Louis as the Engelmann Professor of Botany. In 2006, his position was renamed President and Director. Raven recently announced his plans to retire in 2011, to coincide with his 75th birthday and his 40th year at the Garden.

Raven is possibly best known for his important work Coevolution of Insects and Plants published in the journal Evolution in 1964 which he coauthored with Paul R. Ehrlich. Since then he has authored numerous scientific and popular papers, many on the evening primrose family, Onagraceae. Raven is also an author of the widely used textbook Biology of Plants, now in its seventh edition, coauthored with Ray F. Evert and Susan E. Eichhorn (both of University of Wisconsin, Madison).

He is a frequent speaker on the need for biodiversity and species conservation.

Raven is currently writing his memoirs, assisted by Andrew Szanton.

The American Society of Plant Taxonomists established in 2000 the Peter Raven Award in his honor to be conferred to authors with outstanding contributions to plant taxonomy and "for exceptional efforts at outreach to non-scientists".

He serves on the advisory council of CRDF Global. He also served on the board of trustees for Science Service, now known as Society for Science & the Public, from 1993-1996.

The standard author abbreviation P.H.Raven is used to indicate this individual as the author when citing a botanical name.[3]