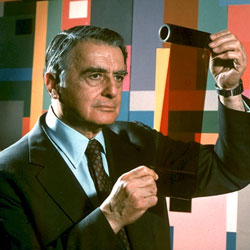 Edwin Herbert Land ( &ndash; ) was an American and inventor. Among other things, he invented inexpensive filters for polarizing light, a practical system of in-camera instant photography, and his theory of vision.

Edwin was born in to Harry and Helen Land. His father owned a scrap metal yard. He attended the at , a semi-private high school, and graduated in the class of 1927. The library there was posthumously named for him, having been funded by grants from his family. He studied at Harvard. After his freshman year, he left Harvard for New York City.

In , he invented the first inexpensive filters capable of polarizing light, film. Because he was not associated with an educational institution, he lacked the tools of a proper laboratory, making this a difficult endeavor. Instead, he would sneak into a laboratory at late at night to use their equipment. [http://www.bookrags.com/Edwin_H._Land] He also availed himself of the New York City to scour the scientific literature for prior work on polarizing substances. His breakthrough came when he realized that instead of attempting to grow a large single crystal of a polarizing substance, he could manufacture a film with millions of micrometre-sized polarizing crystals that were coaxed into perfect alignment with each other.

After developing a polarizing film, Edwin Land returned to Harvard. However, he still did not finish his studies or receive a degree. Once Land could see the solution to a problem in his head, he lost all motivation to write it down or prove his vision to others. [http://www.amazon.com/dp/0395421144] Often his wife, at the prodding of his instructor, would extract from him the answers to homework problems. She would then write up the homework and hand it in so he could receive credit and not fail the course.

In 1932 he established the Land-Wheelwright Laboratories together with his Harvard physics instructor to commercialize his polarizing technology. Wheelwright, his instructor, came from a family of financial means and agreed to fund the company. After a few early successes developing polarizing filters for sunglasses and photographic filters, Land obtained funding from a series of investors for further expansion. The company was renamed the in 1937. Land further developed and produced the sheet polarizers under the trademark. Although the initial major application was for sunglasses and scientific work, it quickly found many additional applications: for color animation in the 850 Peacock of 1942, for glasses in full-color stereoscopic (3-D) movies, to control brightness of light through a window, a necessary component of all LCDs, and many more. During , he worked on military tasks, which included developing s, s, the first passively guided , and a special stereoscopic viewing system called the which revealed camouflaged enemy positions in aerial photography.

A little more than three years later, on , Edwin Land demonstrated an and associated film. Called the , it was in commercial sale less than two years later. Polaroid originally manufactured sixty units of this first camera. Fifty-seven were put up for sale at Boston's Jordan Marsh department store before the 1948 Christmas holiday. Polaroid marketers incorrectly guessed that the camera and film would remain in stock long enough to manufacture a second run based on customer demand. All fifty-seven cameras and all of the film were sold on first day of demonstrations.

During his time at Polaroid, Land was notorious for his marathon research sessions. When Land conceived of an idea, he would experiment and brainstorm until the problem was solved with no breaks of any kind. He needed to have food brought to him and to be reminded to eat. [http://www.amazon.com/dp/0395421144] He once wore the same clothes for eighteen days straight while solving problems with the commercial production of polarizing film. [http://www.amazon.com/dp/0395421144] As the Polaroid company grew, Land had teams of assistants working in shifts at his side. As one team wore out, the next team was brought in to continue the work.

In the 1950s, Edwin Land and his team helped design the optics of the revolutionary spy plane. Also in this decade, Land first discovered a for projecting the entire spectrum of hues with only two colors of projecting light (he later found more specifically that one could achieve the same effect using very narrow bands of 500nm and 557nm light). Some of this work was later incorporated in his theory of . In 1957, awarded him an honorary doctorate, and Edwin H. Land Blvd., a street in , was later named in his memory. The street forms the beginning of Memorial Drive, where the Polaroid company building was located.

In the early 1970s, Land attempted to explain the previously known phenomenon of with his theory. His popular demonstrations of color constancy raised much interest in the concept. He considered his leadership towards the development of integral instant — the film and camera — to be his crowning achievement.

Although he led the Polaroid Corporation as a chief executive, Land was a scientist first and foremost, and as such made sure that he performed "an experiment each day". Despite the fact that he held no formal degree, employees, friends, and the press respected his scientific accomplishments by calling him Dr. Land. The only exception was the , which refused to use that honorific title throughout his lifetime. [http://www.amazon.com/dp/0395421144]

Land often made technical and management decisions based on what he felt was right as both a scientist and a humanist, much to the chagrin of Wall Street and his investors. From the beginning of his professional career, he hired women and trained them to be research scientists. Following the assassination of in 1968, he led Polaroid to the forefront of the movement.

Despite the tremendous success of his instant cameras, Land's unsuccessful instant movie system was a financial disaster, and he resigned as Chairman of Polaroid on , . In his retirement years, he founded the .

Although Land never received a formal degree, he received honorary degrees from Harvard, Yale, Columbia, , Willams College, Tufts College, Washington University, Polytechnic Institute of Brooklyn, University of Massachusetts, and many others. He was awarded the , the highest award given to a U.S. , in 1963 for his work in optics. He held 535 , compared with 's 1,097 American patents [http://www.amazon.com/dp/0395421144] . In 1977 he was inducted into the . In 1988 Land was awarded the for "the invention, development and marketing of instant photography".

* [http://www.mada.org.il/website/html/eng/2_1_1-5.htm Short biography]
* [http://www.swiss.csail.mit.edu/~hal/misc/generation-of-greatness.html "Generation of Greatness: The Idea of a University in an Age of Science", Ninth Annual Arthur Dehon Little Memorial Lecture at the Massachusetts Institute of Technology. May 22, 1957]
* [http://www.nap.edu/readingroom/books/biomems/eland.html Edwin Herbert Land]