Geography of the Democratic Republic of the Congo

Geography of the Democratic Republic of the Congo 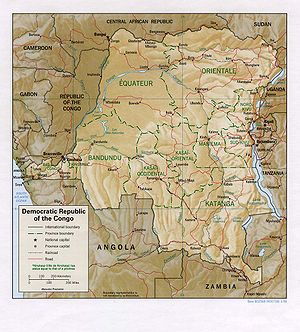 Map of the DR of the Congo 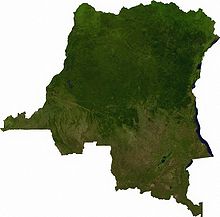 Satellite image of Democratic Republic of the Congo 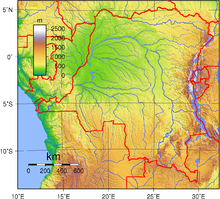 Topography of the Democratic Republic of the Congo

The Democratic Republic of the Congo includes the greater part of the Congo River Basin, which covers an area of almost 1,000,000 square kilometres (390,000 sq mi). The country's only outlet to the Atlantic Ocean is a narrow strip of land on the north bank of the Congo River.

The vast, low-lying central area is a basin-shaped plateau sloping toward the west, covered by tropical rainforest and criss-crossed by rivers, a large area of this has been categorised by the World Wildlife Fund as the Central Congolian lowland forests ecoregion. The forest centre is surrounded by mountainous terraces in the west, plateaus merging into savannas in the south and southwest, and dense grasslands extending beyond the Congo River in the north. High mountains of the Ruwenzori Range (some above 5,000 m/16,000 ft) are found on the eastern borders with Rwanda and Uganda (see Albertine Rift montane forests for a description of this area).

The DRC lies on the Equator, with one-third of the country to the north and two-thirds to the south. The climate is hot and humid in the river basin and cool and dry in the southern highlands, with a cold, alpine climate in the Ruwenzori Range. There is a South of the Equator, the rainy season lasts from October to May and north of the Equator, from April to November. Along the Equator, rainfall is fairly regular throughout the year. During the wet season, thunderstorms often are violent but seldom last more than a few hours. The average rainfall for the entire country is about 1,070 mm (42 in).

Area - comparative: slightly less than one-fourth the size of the US

Location of country on world map

Terrain: vast central plateau covered by tropical rainforest, surrounded by mountains in the west, plains and savanna in the south/southwest, and grasslands in the north. The high mountains of the Ruwenzori Range on the eastern borders.

Natural hazards: periodic droughts in south; Congo River floods (seasonal); in the east, in the Great Rift Valley, there are active volcanoes

Geography: straddles Equator; very narrow strip of land that controls the lower Congo River and is the only outlet to South Atlantic Ocean; dense tropical rainforest in central river basin and eastern highlands

This is a list of the extreme points of the Democratic Republic of the Congo, the points that are farther north, south, east or west than any other location.