Culture of the Democratic Republic of the Congo

Culture of the Democratic Republic of the Congo

The culture of the Democratic Republic of the Congo reflects much of the diversity of its hundreds of ethnic groups and their differing ways of life throughout the country—from the mouth of the River Congo on the coast, upriver through the rainforest and savanna in its centre, to the more densely populated mountains in the far east. Since the late 19th century, traditional ways of life have undergone changes brought about by colonialism, the struggle for independence, the stagnation of the Mobutu era, and most recently, the First and Second Congo Wars. Despite these pressures, the customs and cultures of the Congo have retained much of their individuality. The country's 70 million inhabitants are mainly rural. The 30 percent who live in urban areas have been the most open to Western influences. 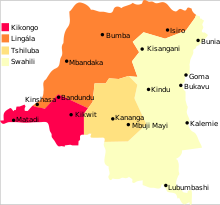 Like many African countries, the borders were drawn up by colonial powers, and bore little relation to the actual spread of ethno-linguistic groups. There are around 250 languages spoken in the country, with perhaps a similar number of ethnic groups. Broadly speaking, there are four main population groups:

The above descriptions are by necessity simplified. Many Congolese are multilingual, and the language used depends on the context. For instance, a government official might use French to set a tone of formality and authority with another official, use Lingala when buying goods at a market, and the local language when in his home village. English is also spoken, especially in the east where eastern and southern African influences have spread in the post-Mobutu era. Among the slangs spoken in Congo, Indubil has been noted since around the sixties[1] and continues to evolve nowadays[2].

Mixed marriages between ethnic groups are common, particularly in urban areas where many different groups live side by side. Europeans appear in small numbers throughout the country, as missionaries in the countryside, and as businessmen and traders in the cities. Also acting as merchants are small numbers of Lebanese and Pakistanis.

More information on the various peoples in Congo can be found in the Early Congolese History article.

Main article: Religion in the Democratic Republic of the Congo 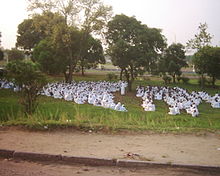 The main religions in the DRC are:

There are small communities of Jews and Hindus who work in commercial urban areas. Atheism is very rare.

Though only 11.5 per cent of Congolese exclusively follow indigenous beliefs, these traditional belief systems are often intermingled with forms of Christianity, and are familiar to the majority of Congolese. Throughout the DRC the beliefs take on a number of forms, but they have a number of things in common:

Belief in Witchcraft is common, and sometimes intersects with the more fundamentalist and evangelical versions of Christianity. In recent years, these beliefs have gained adherents in urban areas, whereas before they were mainly confined to the countryside. The increasing beliefs in witches and sorcery have tended to mirror the social decay caused by war and poverty. Many of the street children that roam the Congo's cities have been cast out of their families after being denounced as witches. These homeless 'witch children' often live in cemeteries and only come out at night, and follow occult practices. See BBC News article on Kinshasa's street children. For comparison, see article on beliefs of Miami street children. 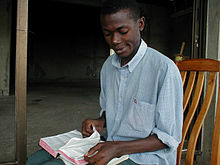 Christianity has a long history in Congo, dating back to 1484, when the Portuguese arrived and convinced the king and entourage of the Kongo people to convert. In 1506 a Portuguese-supported candidate for kingship, Alfonso I of Kongo won the throne. Alfonso (the Kongo royal family had begun to take on Portuguese names), established relations with the Vatican. More widespread conversion occurred during the Belgian colonial era. Christianity varies in its forms, and is in some ways surprisingly similar to native beliefs.

During the colonial period, a European-style Christianity was at first promoted by the authorities. Native Congolese generally attended different churches or services from whites. If they worshiped under the same roof, the native Congolese sat on benches at the back, while the whites sat in chairs at the front. Towards the end of the colonial era, more African elements were incorporated into Christianity, including songs and dances which were formerly condemned as pagan. Eventually, even native fables and myths were appropriated and merged into Congolese Christianity, in a similar process to that which occurred with Christianity in Europe.

Recent developments include the increasing popularity of the "Gospel of Prosperity" – a form of Christianity in which the emphasis is on wealth acquisition and born-again Christianity. Adherents are led to believe that instant wealth and magical prosperity will result from giving tithes to their charismatic preacher. The leaders often draw on the techniques of American televangelists, and the message is appealing to those living in extreme poverty.

In the first half on the 20th century, prophetic movements sprang up. Their nature was both anti-colonial and Christian, and led to a rigorous crackdown by the authorities.

Simon Kimbangu was the prophet of largest of these movements. He was born in a village near Kinshasa, raised and educated by a Protestant Christian mission and trained to become a priest. In April 1921, at the age of 39, he reportedly had a religious vision of Jesus Christ, who called on him to reconvert his people and dedicate his life to Christ. Kimbangu chose to try to ignore the vision, and fled to Kinshasa where he abandoned his life as a priest and took to menial work. More visions came, and eventually he heeded the calling and returned to his home village and started to devote his life to Christ. Soon after, he is reported to have healed a sick woman by laying his hands on her. Dozens of apparent miracles were subsequently performed by Kimbangu, and he gained followers from surrounding villages and towns. The official Catholic organizations protested to the authorities, and the Protestant church abandoned him. The economic effects of Kimbangu's ministry were being felt, with thousands of Congolese leaving their work to listen to Kimbangu speak. In June the Belgians arrested him for inciting revolution and civil disobedience. Four months later he was sentenced to death. After an international outcry, Albert I of Belgium commuted the sentence to life impisonment. He died 30 years later in prison, in 1951.

Colonial authorities assumed his movement would wither after his imprisonment and death, but the church continued to flourish underground, and was an effective weapon in the fight against colonialism. In the post-colonial era, its record has been more mixed. Instead of banning the church, Mobutu used a far more effective method of neutralizing it: namely co-opting the church and giving it an official status. Kimbanguism has now spread across the country, and now has branches in nine of the surrounding countries, making it the most popular "native" form of Christianity in Africa. Followers do not smoke, drink alcohol and abhor violence. Monogamy is practiced.

Article 22 of the constitution allows for religious freedom. These rights are generally respected by the government [1]. Religious tension exists in some areas because of the link between prophetic groups and paramilitary organizations. In the turbulent eastern region, where the Second Congo War still simmers, some guerrilla groups have a major religious element, believing for instance that they are able to turn enemy bullets into water by wearing certain fetishes. 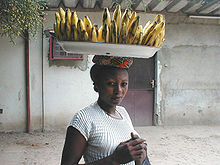 Only 2.86% of the land is cultivated, and most of this is used for subsistence farming. People gather wild fruit, mushrooms,and honey, etc.; hunt (see bushmeat); and fish. They will often sell these crops at markets or by the roadside. Cattle breeding and the development of large-scale agricultural businesses has been hindered by the recent war and the poor quality of the road system.

Congo's farmland is the source of a wide variety of crops. These include maize, rice, cassava (manioc), sweet potatoes, yam, taro, plantain, tomatoes, pumpkin and varieties of peas and nuts. These foods are eaten throughout the country, but there are also regional dishes. The most important crops for export are coffee and palm oil.