The river and its tributaries flow through the Congo rainforest, the second largest rain forest area in the world, second only to the Amazon Rainforest in South America. The river also has the second-largest flow in the world, behind the Amazon; the third-largest drainage basin of any river, behind the Amazon and Río de la Plata rivers; and is one of the deepest rivers in the world, at depths greater than 230 m (750 ft).[2][4] Because large sections of the river basin lie above and below the equator, its flow is stable, as there is always at least one part of the river experiencing a rainy season.[5]

The Congo gets its name from the ancient Kingdom of Kongo which inhabited the lands at the mouth of the river. The Democratic Republic of the Congo and the Republic of the Congo, both countries lying along the river's banks, are named after it. Between 1971 and 1997 the government of then-Zaire called it the Zaire River. 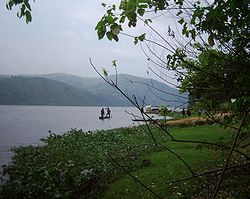 The Congo river at Maluku. 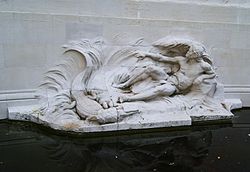 A statue depicting the Congo river in Parc du Cinquantenaire in Brussels, Belgium. Belgium was the colonial power of Belgian Congo from 1908-1960.

The sources of the Congo are in the highlands and mountains of the East African Rift, as well as Lake Tanganyika and Lake Mweru, which feed the Lualaba River, which then becomes the Congo below Boyoma Falls. The Chambeshi River in Zambia is generally taken as the source of the Congo in line with the accepted practice worldwide of using the longest tributary, as with the Nile River.

The Congo flows generally northwards from Kisangani just below the Boyoma falls, then gradually bends southwestwards, passing by Mbandaka, joining with the Ubangi River, and running into the Pool Malebo (Stanley Pool). Kinshasa (formerly Léopoldville) and Brazzaville are on opposite sides of the river at the Pool, where the river narrows and falls through a number of cataracts in deep canyons (collectively known as the Livingstone Falls), running by Matadi and Boma, and into the sea at the small town of Muanda. 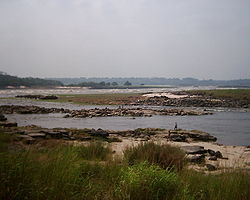 The beginning of the Livingstone Falls near Kinshasa.

Although the Livingstone Falls prevent access from the sea, nearly the entire Congo is readily navigable in sections, especially between Kinshasa and Kisangani. Large river steamers worked the river until quite recently. The Congo River still is a lifeline in a land without roads or railways.[6]

Railways now bypass the three major falls, and much of the trade of Central Africa passes along the river, including copper, palm oil (as kernels), sugar, coffee, and cotton. The river is also potentially valuable for hydroelectric power, and the Inga Dams below Pool Malebo are first to exploit the Congo river.

The Congo River is the most powerful river in Africa. During the rainy season over 50,000 cubic meters of water per second flow into the Atlantic Ocean. Opportunities for the Congo River and its tributaries to raise hydropower are therefore enormous. Scientists have calculated that the entire Congo Basin accounts for thirteen percent of global hydropower potential. This would provide sufficient power for all of sub-Saharan Africa's electricity needs.[7]

Currently there are about forty hydropower plants in the Congo Basin. The largest is the spectacular Inga Falls, about 200 km southwest of Kinshasa. The prestigious Inga Project was launched in early 1970 to build the first dam. Four additional dams and the construction of a gigantic dam would have a capacity of 34,500 megawatts, constituting nearly three times the capacity of all current Belgian power plants together. To date only two dams have been built the Inga I and Inga II, of which constitute fourteen turbines.[7]

In February 2005, South Africa's state-owned power company, Eskom, announced a proposal to increase the capacity of the Inga dramatically through improvements and the construction of a new hydroelectric dam. The project would bring the maximum output of the facility to 40 GW, twice that of China's Three Gorges Dam.[8]

It is feared that these new hydroelectric dams could lead to the extinction of many of the fish species that are endemic to the river.[9] 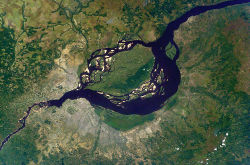 Satellite picture of Brazzaville, Kinshasa and the Malebo Pool of the Congo River. (When opened, this image has annotations. Move the mouse pointer over the image to see them.)

The Congo River was formed many years ago during the Pleistocene.[10]

The Congo's formation may have led to the allopatric speciation of the bonobo and the common chimpanzee from their most recent common ancestor.[11] The bonobo is endemic to the humid forests in the region, as are other iconic species like the Allen's swamp monkey, dryas monkey, aquatic genet, okapi and Congo Peafowl.[12][13]

In terms of aquatic life, the Congo River Basin has a very high species richness, and among the highest known concentrations of endemics.[2] Until now, almost 700 fish species have been recorded from the Congo River Basin, and large sections remain virtually unstudied.[14] Due to this and the great ecological differences between the regions in the basin, it is often divided into multiple ecoregions (instead of treating it as a single ecoregion). Among these ecoregions, the Lower Congo Rapids alone has more than 300 fish species, including approximately 80 endemics[9] while the southwestern part (Kasai Basin) alone has about 200 fish species, of which about a quarter are endemic.[15] The dominant fish families–at least in parts of the river–are Cyprinidae (carp/cyprinids, such as Labeo simpsoni), Mormyridae (elephantfishes), Alestidae (African tetras), Mochokidae (squeaker catfishes), and Cichlidae (cichlids).[16] Among the natives in the river is the huge, highly carnivorous giant tigerfish. Two of the more unusual endemic cichlids are the whitish (non-pigmented) and blind Lamprologus lethops, which is believed to live as deep as 160 metres (520 ft) below the surface,[9] and Heterochromis multidens, which appears to be more closely related to cichlids of the Americas than other African cichlid.[17] There are also numerous endemic frogs and snails.[16][18] Several hydroelectric dams are planned on the river, and these may lead to the extinction of many of the endemics.[9]

Several species of turtles, and the slender-snouted, Nile and dwarf crocodile are native to the Congo River Basin.