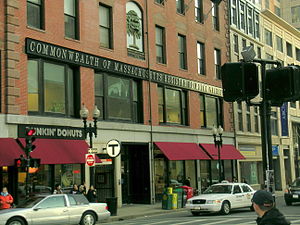 In the United States of America, a Department of Motor Vehicles (or DMV) is a state-level government agency that administers vehicle registration and driver licensing. Similar departments exist in Canada. The name "DMV" is not used in every state or province, nor are the traditional DMV functions handled by a single agency in every state, but the generic term is universally understood, particularly in the context of driver's license issuance and renewal.

The Uniform Vehicle Code prefers the name "Department of Motor Vehicles".[1] The acronym "DMV" is most commonly used to describe the agency (where it exists); however, diverse titles are used in different jurisdictions.

Organization within the government 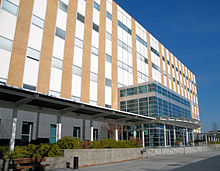 Headquarters of the largest DMV of all, the California Department of Motor Vehicles.

Furthermore, there is much diversity in how the Department of Motor Vehicles (or equivalent) is situated within the structure of a state's government.

Hawaii is the only U.S. state where no part of the state government performs DMV functions; it has completely delegated vehicle registration and driver licensing to county governments.

In Kentucky and Tennessee, the Transportation Cabinet, and the Department of Revenue, Taxpayer Vehicle Services Division, respectively, set the policies and designs for licenses and vehicle registration; but the actual registration and licensing are handled by offices of the county governments.

In the District of Columbia, which is not part of any state, the DMV (formerly the Bureau of Motor Vehicle Services) is part of the city government.

In a few states, there may be a separate department which administers vehicle inspections (which are mandatory in a number of U.S. states with adverse weather conditions which make vehicle maintenance a high priority). In Virginia, the Department of Motor Vehicles handles both driver licensing and vehicle registration, while the Virginia State Police and the Department of Environmental Quality administer safety inspection and emission inspection, respectively. Note that the program is simply administered by the state; actual inspections are performed by specific authorized employees of privately owned gas stations and garages licensed by the state.

Some states do not separate DMV functions into distinct organizational entities at all, but simply bundle them into a laundry list of responsibilities assigned to an existing government agency. For example, in the state of Washington, the Department of Licensing is responsible for driver's licenses, and vehicle and boat registrations in addition to most other business and occupational licensing. In Michigan and Illinois, the Secretary of State's offices perform responsibilities which would be handled by the DMV in other states.

DMVs and the Internal Revenue Service are the government agencies most Americans deal with the most often.

Almost all long-term residents ("long term" in this case means over 30 days) of a state who wish to operate motor vehicles must possess a driver's license issued by their state DMV, and their vehicles must show license plates (and current registration tags or stickers) issued by that agency.

Vehicles owned by the federal government register with the General Services Administration, rather than a state. Drivers of these vehicles must still be licensed with their home state, however.

The Office of Foreign Missions at the U.S. Department of State has a Diplomatic Motor Vehicles program which issues driver's licenses to foreign diplomats and their dependents, registers their vehicles, and issues special diplomatic license plates.

In some states, besides conducting the written and hands-on driving tests that are a prerequisite to earning a driver's license, DMVs also regulate private driving schools and their instructors.

Many DMVs allow third parties to issue registration materials. These may include companies that specialize in processing registration application paperwork (often called "tag agents") or car dealers. Tag agents are given direct access to DMV systems (as in Louisiana [2]). Dealers often use their state DMV's electronic vehicle registration (EVR) program.

The certification of ownership of automotive vehicles is handled by each states DMV normally by issuing a vehicle title. The types of vehicles certified by a DMV varies by state. While almost all DMVs title vehicles that are driven on roadways, the responsibility to title boats, mobile homes, and off-road vehicles can be the responsibility of other agencies such as a Department of Natural Resources.

As the issuer of vehicle titles, DMVs are also usually responsible for recording liens made with an automobile as collateral on a secured loan. Several DMVs provide an Electronic Lien and Title program for lienholders.

Duties of the DMV include the enforcement of state and federal laws regarding motor vehicles. Many departments have within their ranks sworn law enforcement officers whose purpose it is to enforce DMV regulations which are codified in state law. In North Carolina, for example, the DMV contains an element known as "License and Theft." Stolen motor vehicles are tracked down by "Inspectors," sworn law enforcement officers of the state employed by DMV, and suspected cases of fraudulent registrations, license plates, and/or theft of those elements, are investigated. Inspectors also investigate independent inspection stations licensed by the DMV. At times, some of these stations violate DMV regulations codified by law. The most common of these violations is passing inspection for a vehicle with windows tinted below the legal limits. The penalty for such a violation is a $1000 fine and, for first time offenders, a revocation of the inspection permit for 30 days. Inspection stations face permanent permit revocation for subsequent offenses.[10] In New York, the Division of Field Investigations (DFI) is the criminal investigations arm of the DMV. It employs investigators to combat auto theft, identity theft, and fraudulent document-related crimes that take place in New York. These investigators are armed New York State peace officers with statewide authority to enforce laws and handle investigations.

Compared to standard law enforcement officers, DMV law enforcement agents operate with greater flexibility when it comes to their specific police powers. If a person under investigation by the DMV refuses to answer questions or meet with DMV law enforcement agents, their registration and tags may be canceled. Although a citizen has a constitutional right not to speak or meet with sworn law enforcement officers while under investigation, no constitutional right protects a person's motor vehicle registration with a state agency. Another example of this flexibility of police powers is found in the policies of many states regarding suspected DUI offenders. If a person is stopped by police under suspicion of driving while impaired, and refuses a breath test to determine blood alcohol content, the DMV will automatically revoke that person's license for one year. Even if evidence of that person's impairment is found to be insufficient at trial, the individual loses their driving privileges simply for having refused the sobriety test.[11][12]

Equivalent agencies in other countries