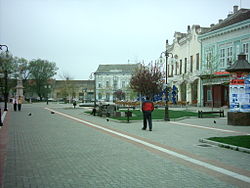 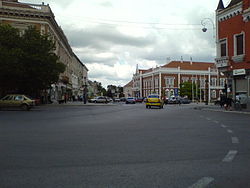 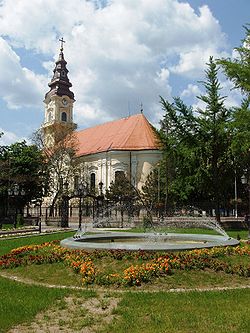 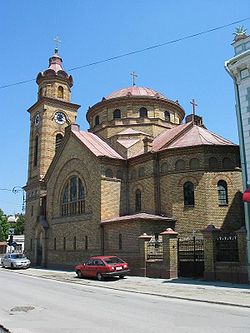 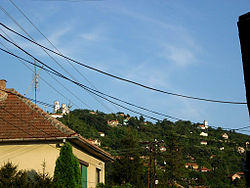 The Chapel Hill with the new Orthodox church and the old Exaltation of the Holy Cross Catholic Church. 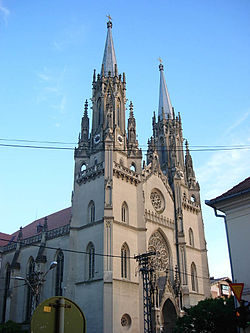 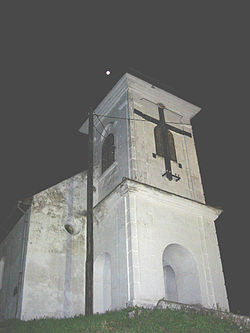 The Exaltation of the Holy Cross Catholic Church by night.

Vršac (Serbian Cyrillic: Вршац, pronounced [ʋr̩̂ʃat͡s], Hungarian: Versec, Versecz, German: Werschetz, Romanian: Vârşeţ, Turkish: Virşac) is a town and municipality located in Serbia. In 2002 the town's total population was 36,623, while Vršac municipality had 54,369 inhabitants. Vršac is located in the Banat region, in the Vojvodina province of Serbia. It is part of the South Banat District.

The name Vršac is of Serbian origin. It derived from the Slavic word vrh, meaning "summit". [2]

In Serbian, the town is known as Вршац or Vršac, in Romanian as Vârşeţ, in Hungarian as Versec, in German as Werschetz, and in Turkish as Virşac.

The Agathyrsi (people of mixed Scythian-Thracian origin) are the first people known to have lived in this region. Later, the region was inhabited by Getae and Dacians. It belonged to the Dacian kingdoms of Burebista and Decebalus, and then to the Roman Empire from 102 to 271. In Vršac, archaeologists have found traces of ancient Dacian and Roman settlements. Later, the region belonged to the Empire of the Huns, the Gepid and Avar kingdoms, and the Bulgarian Empire.

The Slavs settled in this region in the 6th century, and the Slavic tribe known as the Abodrites (Bodriči) was recorded as living in the area. The Slavs from the region were Christianized during the rule of the duke Ahtum in the 11th century. When duke Ahtum was defeated by the Kingdom of Hungary, the region was included in the latter state.

Information about the early history of the town is scant. According to Serbian historians, medieval Vršac was founded and inhabited by Serbs in 1425,[4][5] although it was under administration of the Kingdom of Hungary. The original name of the town is unknown. There are several theories that its first name was Vers, Verbeč, Veršet or Vegenje, but these theories are not confirmed. The name of the town appears for the first time in 1427 in the form Podvršan. [3] The Hungarian 12th century chronicle known as Gesta Hungarorum mention the castle of Vrscia in Banat, which belonged to Bulgarian duke Glad in the 9th century. According to some interpretations, Vrscia is identified with modern Vršac,[6] while according to other opinions, it is identified with Orşova. According to some claims, the town was at first in the possession of the Hungarian kings,[citation needed] and later became property of a Hungarian aristocrat, Miklós Perényi, ban of Severin.[citation needed] In the 15th century, the town was in the possession of the Serbian despot Đurađ Branković. [4] According to some claims, it was donated to the despot by Hungarian king Sigismund in 1411.[citation needed] According to other sources, Vršac fortress was built by Đurađ Branković after the fall of Smederevo.[7]

The Ottomans destroyed the town in the 16th century, but it was soon rebuilt under Ottoman administration. In 1590/91, the Ottoman garrison in Vršac fortress was composed of one aga, two Ottoman officers and 20 Serb mercenaries. The town was seat of the local Ottoman authorities and of the Serbian bishop. In this time, its population was composed of Muslims and Serbs.[8]

In 1594, the Serbs in the Banat started large uprising against Ottoman rule, and Vršac region was centre of this uprising. The leader of the uprising was Teodor Nestorović, the bishop of Vršac. The size of this uprising is illustrated by the verse from one Serbian national song: "Sva se butum zemlja pobunila, Šest stotina podiglo se sela, Svak na cara pušku podigao!" ("The whole land has rebelled, a six hundred villages arose, everybody pointed his gun against the emperor").

The Serb rebels bore flags with the image of Saint Sava, thus the rebellion had a character of a holy war. The Sinan-paša that lead the Ottoman army ordered that green flag of Muhammad should be brought from Damascus to confront this flag with image of Saint Sava. Furthermore, the Sinan-paša also burned the mortal remains of Saint Sava in Belgrade, as a revenge to the Serbs. Eventually, the uprising was crushed and most of the Serbs from the region escaped to Transylvania fearing the Ottoman retaliation. However, since the Banat region became deserted after this, which alarmed the Ottoman authorities who needed people in this fertile land, the authorities promised to spare everyone who came back. The Serb population came back, but the amnesty did not apply to the leader of the rebellion, Bishop Teodor Nestorović, who was flayed as a punishment. The Banat uprising was one of the three largest uprisings in Serbian history and the largest before the First Serbian Uprising led by Karađorđe.

In 1716, Vršac passed from Ottoman to Habsburg control, and the Muslim population fled the town. In this time, Vršac was mostly populated by Serbs, and in the beginning of the Habsburg rule, its population numbered 75 houses. Soon, German colonists started to settle here. They founded new settlement known as Werschetz, which was located near old (Serbian) Vršac. Serbian Vršac was governed by knez, and German Werschetz was governed by schultheis (mayor). Name of the first Serbian knez in Vršac in 1717 was Jovan Crni. In 1795, two towns, Serbian Vršac and German Werschetz, were officially joined into one single settlement, in which the authority was shared between Serbs and Germans. It was occupied by Ottomans between 1787-1788 during Russo-Turkish War (1787–1792).

The 1848/1849 revolution disrupted the good relations between Serbs and Germans, since Serbs fought on the side of the Austrian authorities and Germans fought on the side of the Hungarian revolutionaries. In 1848-1849, the town was part of autonomous Serbian Vojvodina, and from 1849 to 1860, it was part of the Voivodship of Serbia and Tamiš Banat, a separate Austrian province. After the abolition of the voivodship, Vršac was included in Temes county of the Kingdom of Hungary, which became one of two autonomous parts of Austria-Hungary in 1867. The town was also a district seat. In 1910, the population of the town numbered 27,370 inhabitants, of whom 13,556 spoke German language, 8,602 spoke Serbian, 3,890 spoke Hungarian and 879 spoke Romanian.[9][10]

From 1918, the town was part of the newly formed Kingdom of Serbs, Croats and Slovenes (later renamed Yugoslavia). According to 1921 census, speakers of German language were most numerous in the town, while 1931 census recorded 13,425 speakers of Yugoslav languages and 11,926 speakers of German language. During the Axis occupation (1941–1944), Vršac was part of autonomous Banat region within German-occupied Nedić's Serbia. Many Danube Swabians collaborated with the Nazi authorities and many men were conscripted into the Waffen SS. In 1944, one part of Vršac citizens of German ethnicity left from the city, together with defeated German army.[11] Those who remained in Vršac were sent to local communist prison camps, where some of them died from disease and malnutrition. According to some claims, some were tortured or killed by the partisans.[citation needed] Since 1944 when it was liberated by the Red Army's 46th Army, the town was part of the new Socialist Yugoslavia. After prison camps were dissolved (in 1948) and Yugoslav citizenship was returned to the Germans, the remaining German population left Yugoslavia because of economic reasons.[12] 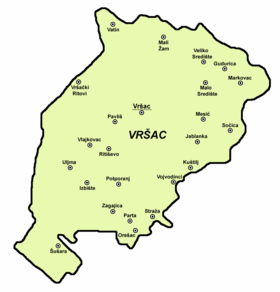 Vršac municipality includes the city of Vršac and the following villages:

Note: for the places with Romanian and Hungarian ethnic majorities, the names are also given in the language of the concerned ethnic group.

Ethnic groups in the city

Ethnic groups in the municipality

The population of the Vršac municipality (54,369 people) is composed of the following ethnic groups (2002 census):[14]

Vršac is the seat of the Serb Orthodox Eparchy of Banat. Some of the Serb cultural-artistic societies in Vršac are named "Žarko Zrenjanin", "Penzioner" and "Grozd".

The city's Romanian minority have a Romanian-language theater, schools and a museum. Romanian-language instruction takes place at a kindergarten, an elementary school, a high school and a teachers' university. The cultural organization and folklore group "Petru Albu" hold many cultural events in Vršac and nearby Romanian-populated villages.[15][16] In 2005, Romania opened a consulate in Vršac.[17]

Vršac is a town famous for well-developed industry, especially pharmaceuticals, wine and beer, confectioneries and textiles. The leading pharmaceutical company in Vršac (and nationwide) is the Hemofarm Group, which helped start the town's Technology Park.

Vršac is considered to be one of the most significant centers of agriculture in the region of southern Banat, which is the southern part of the province of Vojvodina. It is mainly because it has 54,000 hectares of arable and extremely fertile land in its possession.

The city itself together with 22 surrounding communities has some 56,000 residents, whose lives are closely connected with agriculture.

The Millennium sport center, built in 2002, is located in Vršac. The region around Vršac is famed for its vineyards.

The symbol of the town is the Vršac Castle (Vršački zamak), which dates back to the mid 15th century. It stands at the top of the hill (399m) overlooking Vršac.

Vrsac tower pictured from a nearby hill

The other theory claim that Vršac Castle is a remain of the medieval fortress known as Erdesumulu (Hungarian: Érdsomlyó or Érsomlyó, Serbian: Erd-Šomljo / Ерд-Шомљо or Šomljo / Шомљо). However, the other sources do not identify Erdesumulu with Vršac, but claim that these two were separate settlements and that location of town and fortress of Erdesumulu was further to the east, on the Karaš River, in present-day Romanian Banat.

There are two Serbian Orthodox monasteries in the Vršac municipality: Mesić monastery from the 13th century and Središte monastery, which is currently under construction.

One of interesting places to visit in Vršac is the family winery, Vinik, which produces the Vržole Red, Vržole White and Bermetto wine.

Vršac is twinned with: