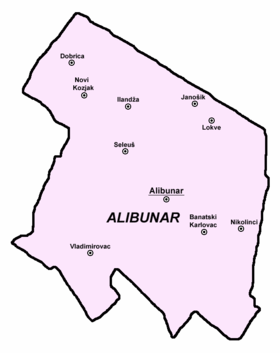 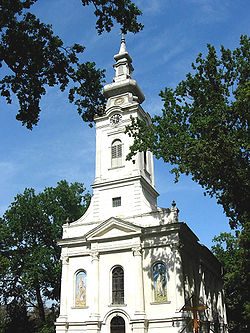 Alibunar (Алибунар) is a town and municipality in South Banat District of Vojvodina, Serbia. Alibunar town has a population of 3,402, and Alibunar municipality 22,856.

The name of the town derived from the Serbian word "bunar" ("well" in English) and Muslim/Turkish personal name "Ali". According to the local legend, Alibunar was named after Ali-paša (Ali-pasha), who had a cattle and a well at this place. Even today, there is a well in the town which is known as "Ali-pašin bunar" ("well of Ali-paša"). Before the Ottoman rule, Alibunar was known as "Krsturnica".

In this area, settlements existed in Neolith, Bronze Age and Roman times. However, settlement appeared in historical sources in the 16th century. First recorded name of the settlement was Alijina Voda ("the water of Alija"), presumably named after its Muslim citizen Alija or Ali-paša, who had a house with stone well ("bunar" in Serbian) in the center of the settlement (hence the current name Alibunar or "the well of Ali"). After Ottomans were expelled from this region (in 1717), the settlement had 32 houses. In 1764, settlement was included into Illyrian (Serbian) regiment of Banatian Military Frontier, but in the next year, it was transferred to German regiment of this frontier. Before the inclusion into military frontier, Alibunar had ethnic Serb population, but after it became part of the frontier, 130 mostly Romanian and some 20-30 German families settled in this place. Serbs remained to live in older part of the settlement, Germans settled in its central parts and Romanians in northern parts. Serbian Orthodox church in the settlement was built in 1796.

Population of the town in different censuses:

The population of the Alibunar municipality:

The municipality of Alibunar contains the biggest ethnic Romanian community in Vojvodina.

The population of the Alibunar town: