Prizren (Albanian: Prizren or Prizreni; Serbian: Призрен, Prizren, pronounced [prîzrɛn]; Turkish: Prizren, Pürzeyn, Perzerrin) is a historical city located in southern Kosovo[a]. It is the administrative center of the eponymous municipality and district.

The city has a population of around 131,247 (2010 estimate),[1] mostly Albanians. The municipality has an estimated population of about 170,000 inhabitants, comprising both the town itself and its 76 villages.[2]

The Roman[4] town of Theranda in Ptolemy's Geography is mentioned in the 2nd century A.D.. In the 5th century A.D. it is mentioned as being restored in Dardania with the name of Petrizên by Procopius of Caesarea in De aedificiis (Book IV, Chapter 4).[5] Sometimes it is mentioned even in relation to the Justiniana Prima.[citation needed]

It is thought that its modern name comes from old Serbian Призрѣнь, from при-зрѣти, indicating fortress which could be seen from afar[6] (compare with Czech Přízřenice or mount Ozren). 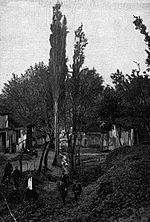 The Serbs, one of the Slavic tribes that settled the Balkans in the 6th-7th centuries AD, acquired the spiritual and cultural orientation they have retained to this day when they accepted Byzantine Orthodox Christianity in the 9th century. They remained within Constantinople’s cultural sphere of influence, while however becoming more independent, forging autonomous kingdoms based on the opportunities that this Christian orientation provided for the development of a coherent civilization and state.

While there were some predecessors, the first major Serbian power arose in 1166, when the Nemanjic dynasty emerged, headed first by Tihomir and then by his brother Stefan. The Serbian Nemanjic dynasty would base the Serbian empire in Kosovo and Metohija, making Kosovo the political, cultural, and religious center of the Serbia. Metohija, which refers more specifically to western Kosovo, is a Byzantine Greek word indicating possessions held by the Orthodox Church. The Nemanjic dynasty would endure until 1371 when it would end due to the invasion of the Ottoman Turks and defeat at the 1371 battle of Marica.

As the Serbian empire sought an outlet to the Adriatic coast, the administrative and religious center of the empire shifted to Shkodër, Prizren, and Decani.

View of the castle in 1863
Main article: Prizren Vilayet

In 1455 Ottoman army had conquered Prizren. Prizren was the capitol of the Sanjak of Prizren, and under new administrative organization of Ottoman Empire it became capitol of the Vilayet.[7] This included the city of Tetova.[8] That time this open mosque had built. It is the first work of Ottoman architecture in Prizren.[citation needed] In recent years, has undergone serious repair and renovation.[citation needed]. Marino Bizzi, the Archbishop of Bar (Antivari), in his 1610 report stated that Prizren had 8.600 large houses and that it was irrigated by many sources of flowing water, like fountains.[9] He recorded that the population of Prizren spoke the Dalmatian language, although some part of the Sanjak of Prizren penetrates into Albania, which population speak its own language.[10] Later it became a part of the Ottoman province of Rumelia. It was a prosperous trade city, benefiting from its position on the north-south and east-west trade routes across the Empire. Prizren became one of the larger cities of the Ottomans' Kosovo Province (vilayet). Prizren was the cultural and intellectual centre of Ottoman Kosovo. It was dominated by its Muslim population, who composed over 70% of its population in 1857. The city became the biggest Albanian cultural centre and the coordination political and cultural capital of the Kosovar Albanians. In 1871, a long Serbian seminary was opened in Prizren, discussing the possible joining of the old Serbia's territories with the Principality of Serbia.

Prizren was an important part of Kosovo Vilayet between 1877–1912.

During the late 19th century the city became a focal point for Albanian nationalism and saw the creation in 1878 of the League of Prizren, a movement formed to seek the national unification and liberation of Albanians within the Ottoman Empire.

The Young Turk Revolution was a step in the dissolving of the Ottoman empire that led to the Balkan Wars. The Third Army (Ottoman Empire) had a division in Prizren, at the time called Pirzerin, the 30th Pirzerin Reserve Infantry Division (Otuzuncu Pirzerin Redif Fırkası). 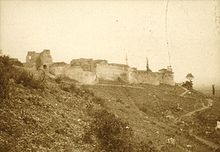 The fortress of Prizren from 1905.

The Prizren attachment was part of the İpek Detachment in the Order of Battle, October 19, 1912 in the First Balkan War.

During the First Balkan War the city was seized by the Serbian army and incorporated into the Kingdom of Serbia[citation needed]. After the Serbian army achieved control over the city of Prizren, it imposed a repressive measures against the civilian population. Serbian detachments breaking into the houses, plundering, making violence and killing indiscriminately.[11] Around 400 people were "eradicated" in the first days of the Serbian military administration.[11] Bodies were lying everywhere on the streets. According to witnesses, these days around Prizren were about 1,500 corpses of Albanians.[12]

Foreign reporters were not allowed to go to Prizren.[12] The British traveler Edith Durham attempted to visit it shortly afterward but was barred by the authorities, as were most other foreigners, for the Montenegrin forces temporarily closed the city before full control was restored. A few visitors did make it through—including Leon Trotsky, then working as a war correspondent—and reports eventually emerged of widespread killings of Albanians. One of the most vivid accounts was provided by the Catholic Archbishop of Skopje, who wrote an impassioned dispatch to the Pope on the dire conditions in Prizren immediately after its capture by Serbia:

"The town resembles the kingdom of death. They knock at the doors of Albanian homes, take the men out and shoot them right away, simply because they are Albanians."[12]

It is estimated that 5.000 Albanians were massacred in the area of Prizren.[12]

A picture of people on the Shadervan in 1943

The Axis Italian forces conquered the city in 1941 during World War II; it was annexed to the Italian puppet state of Albania. In 1943 with the help of the German Wehrmacht Bedri Pejani created the Second League of Prizren.[13] 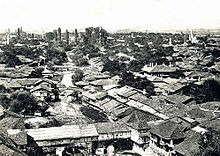 For many years after the restoration of Serbian rule, Prizren and the region of Dečani to the west remained centres of Albanian nationalism. In 1956 the Yugoslav secret police put on trial in Prizren nine Kosovo Albanians accused of having been infiltrated into the country by the (hostile) Communist Albanian regime of Enver Hoxha. The "Prizren trial" became something of a cause célèbre after it emerged that a number of leading Yugoslav Communists had allegedly had contacts with the accused. The nine accused were all convicted and sentenced to long prison sentences, but were released and declared innocent in 1968 with Kosovo's assembly declaring that the trial had been "staged and mendacious." 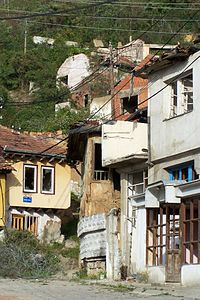 The town of Prizren did not suffer much during the Kosovo War but its surrounding municipality was badly affected 1998-1999. Before the war, the Organization for Security and Co-operation in Europe estimated that the municipality's population was about 78% Kosovo Albanian, 5% Serb and 17% from other national communities. During the war most of the Albanian population were either forced or intimidated into leaving the town. Tusus Neighborhood suffered the most. Some twenty-seven to thirty-four people were killed and over one hundred houses were burned.[14]

At the end of the war in June 1999, most of the Albanian population returned to Prizren. Serbian and Roma minorities fled, with the OSCE estimating that 97% of Serbs and 60% of Romas had left Prizren by October. The community is now predominantly ethnically Albanian, but other minorities such as Turkish, Ashkali (a minority declaring itself as Albanian Roma) and Bosniak (including Torbesh community) live there as well, be that in the city itself, or in villages around. Such locations include Sredska, Mamuša, the region of Gora, etc. [1]

The war and its aftermath caused only a moderate amount of damage to the city compared to other cities in Kosovo.[15] Serbian forces destroyed an important Albanian cultural monument in Prizren, the League of Prizren building[16][17] On March 17, 2004, during the Unrest in Kosovo, all Serb cultural monuments in Prizren were damaged, burned or destroyed, such as old Orthodox Serb churches:

Also, during that riot, entire Serb quarter of Prizren, near the Prizren Fortress, was completely destroyed, and all remaining Serb population was evicted from Prizren.[19][20]

The municipality of Prizren is still the most culturally and ethnically heterogeneous of Kosovo, retaining communities of Bosniaks, Turks, and Roma in addition to the majority Kosovo Albanian population live in Prizren. Only a small number of Kosovo Serbs remains in Prizren and area, residing in small villages, enclaves, or protected housing complexes.[2] Furthermore, Prizren's Turkish community is socially prominent and influential, and the Turkish language is widely spoken even by non-ethnic Turks.

View of the City from the castle 2009

Prizren is the seat of a summer documentary film festival called Dokufest. The city is home to numerous mosques, Orthodox and Catholic churches and other monuments. Among them:

These monuments, part of the historic center of the city, have recently been threatened by development pressures.[23] In addition, war, fires, general dilapidation and neglect have taken their toll on this unique architectural landscape.[24]

For a long time the economy of Kosovo was based on retail industry fueled by remittance income coming from a large number of immigrant communities in Western Europe. Private enterprise, mostly small business, is slowly emerging food processing. Private businesses, like elsewhere in Kosovo, predominantly face difficulties because of lack of structural capacity to grow. Education is poor, financial institutions basic, regulatory institutions lack experience. Central and local legislatures do not have an understanding of their role in creating legal environment good for economic growth and instead compete in patriotic rhetoric. Securing capital investment from foreign entities cannot emerge in such an environment. Due to financial hardships, several companies and factories have closed and others are reducing personnel. This general economic downturn contributes directly to the growing rate of unemployment and poverty, making the financial/economic viability in the region more tenuous.[33]

Many restaurants, private retail stores, and service-related businesses operate out of small shops. Larger grocery and department stores have recently opened. In town, there are eight sizeable markets, including three produce markets, one car market, one cattle market, and three personal/hygienic and house wares markets. There is an abundance of kiosks selling small goods. Prizren appears to be teeming with economic prosperity, but appearances are deceiving as the international presence is reduced and repatriation of refugees and internally displaced persons is expected to further strain the local economy. Market saturation, high unemployment, and a reduction of financial remittances from abroad are ominous economic indicators.[33]

There are three agricultural co-operatives in three villages. Most livestock breeding and agricultural production is private, informal, and small-scale. There are five operational banks with branches in Prizren, the Micro Enterprise Bank (MEB), the Raiffeisen Bank, the Nlb Bank, the Teb Bank and the Payment and Banking Authority of Kosovo (BPK).[33]

According to the 1991 census conducted by the Yugoslav authorities, the municipality of Prizren had a population of 200,584 citizens:

According to the same census, the city of Prizren had 92,303 citizens.

Just before the Kosovo War in 1998, the OSCE estimated the population of the municipality of Prizren: