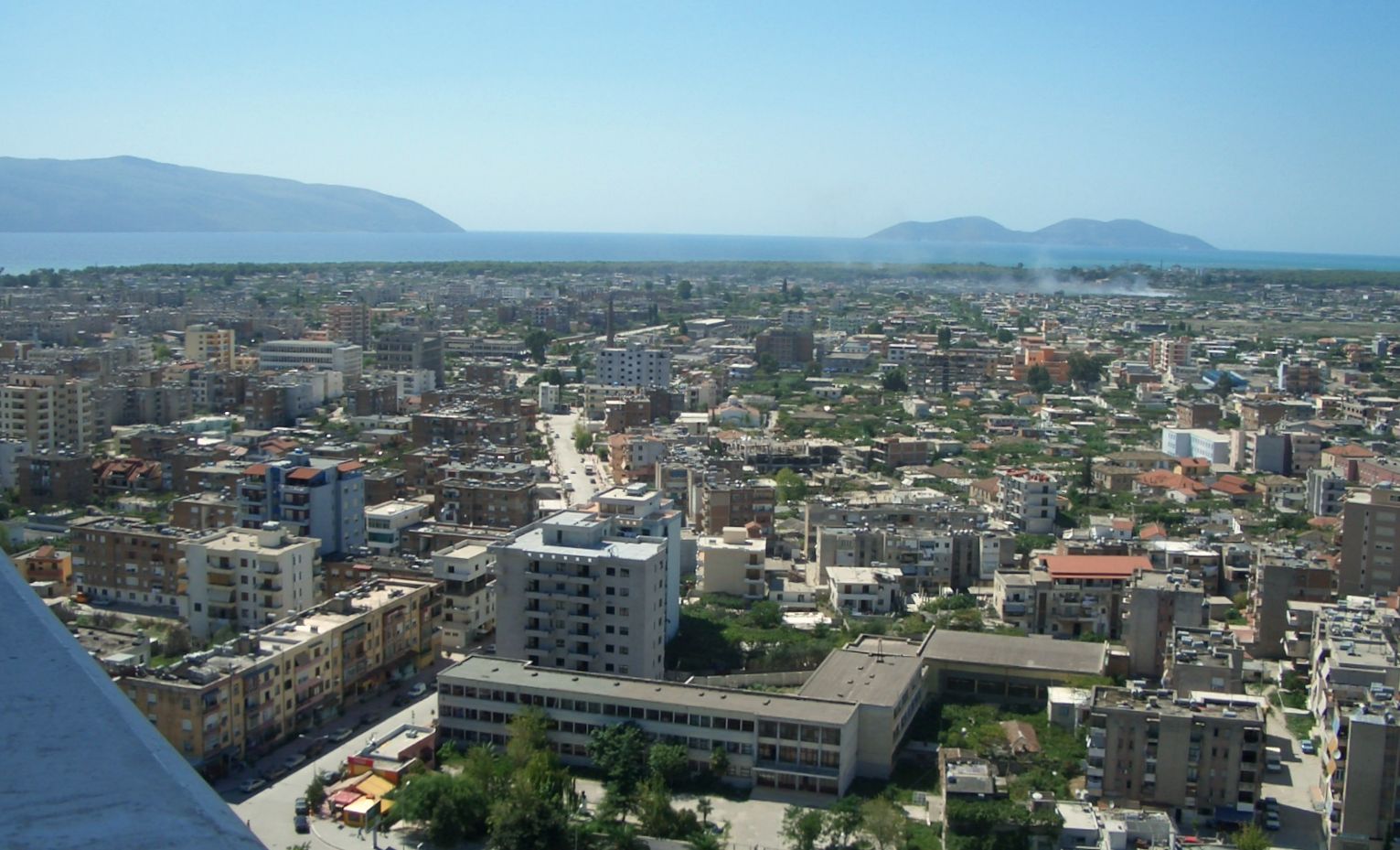 Vlorë or Vlora (: Αυλών, "Aulón", meaning "Valley", or possibly from a Greek reinterpretation of an earlier archaic form), [ [http://books.google.com/books?id=M1JIPAN-eJ4C&pg=PA398&lpg=PA398&dq=Aulon+Vlore+etymology&source=web&ots=idprN-HVVN&sig=jA5ZN8hlnecFpyiidAjLSx32V2Q&hl=en&sa=X&oi=book_result&resnum=2&ct=result google book reference] : Placenames of the World: Origins and Meanings of the Names for 6,600 Countries, Cities, Territories, Natural Features, and Historic Sites By Adrian Room Published by McFarland, 2005 ISBN 0786422483, 9780786422487 433 pages Quote: "The town was founded as the Greek colony of Aulon apparently from the identical Greek word meaning "valley" or possibly a reinterpretation of an existing pre-Greek name"] is the second largest port of , after , with a population of about 124,000 (2006 estimate).

Vlorë occupies an eminence near the , an inlet of the facing the , almost surrounded by mountains. The port of Vlorë is the closest in proximity to the port of , and is just 70 nautical miles from 's coasts. The island of is in close proximity to the city, strategically located at the entrance to the Bay of Vlorë. The town has rather a pleasant appearance, surrounded with gardens and olive groves. Valonia, a material largely used by tanners, is the pericarp of an acorn obtained in the neighboring oak forests, and derives its name from Valona, the ancient name of Vlorë.

Vlorë is one of the oldest cities of Albania. It was founded by Greeks in the 6th century BC and named Aulōn, one of three such colonies on the coast [ [http://www.britannica.com/EBchecked/topic/631621/Vlore Vlore from Encyclopaedia Britannica] Quote: "town that is the second seaport of Albania. It lies at the head of Vlorës Bay, which is protected by the mountainous Karaburun (peninsula) and the island of Sazan (Italian Saseno, ancient Saso). Of ancient origin, it was founded as Aulon, one of three Greek colonies on the Illyrian coast. It was strategically important during Roman times and in the 11th–12th-century wars between Normans and Byzantines. Later it was contested by Venetians, Serbs, and Turks. On Nov. 28, 1912, Ismail Qemal proclaimed there the independence of Albania. Vlorë was occupied by the Italians in 1915–20 and again in 1939. During World War II Sazan was used as a German and Italian submarine base. After the war the town’s harbour and submarine facilities were improved by the Soviet Union, which used the bay as a naval base until 1961, when conflict between the two states resulted in a Soviet departure. Vlorë’s population includes Muslims, Greek Orthodox, and a few Roman Catholics"] , mentioned for the first time by Ptolemy (Geographia, III, xii, 2). Other geographical documents, such as Peutinger's "Tabula" and the "Synecdemus" of Hierocles, also mention it. The city was an important port of the , when it was part of .

It became an in the 5th century. Among the known bishops are Nazarius, in 458, and Soter, in 553 (, "Illyricum sacrum", VII, 397-401). The diocese at that time belonged to the Patriarchate of Rome. In 733 it was annexed, with all eastern Illyricum, to the Ecumenical Patriarchate of Constantinople, and yet it is not mentioned in any "" of that Church. The bishopric had probably been suppressed, for, though the Bulgarians had been in possession of this country for some time, Aulon is not mentioned in the "Notitiae episcopatuum" of the . Vlorë played a central role in the conflicts between the Norman and the during the 11th and 12th centuries. During the Latin domination a Latin see was established, and Eubel (Hierarchia catholica medii aevi, I, 124) mentions several of its bishops. Several of the Latin bishops mentioned by ("Oriens christianus", III, 855-8), and whom (I, 541) mentions under the See of Valanea in Syria, belong either to Aulon in Greece (now Salona) or to Aulon in Albania (Vlorë).

captured Vlorë, or Valona, as it was also called, in 1345 and it was captured by the in 1417; and after being in Venetian possession in 1690, was restored to the Turks in 1691, becoming a caza of the "sandjak" of in the (province) of . The city had about 10,000 inhabitants; there was a Catholic parish, which belonged to the Archdiocese of Durrës; it persisted nominally as a Titular see, suffragan of .

In 1851 it suffered severely from an earthquake.

declared Albania's independence in Vlorë on , , during the . The city became Albania's first capital but was invaded by in 1914 and occupied until 1920. Italy again invaded Vlorë in 1939, following which occupied the city until 1944.

During , the island of Sazan in Bay of Vlorë became the site of a German and Italian and naval installations; these were heavily bombed by the .After WWII, under communism, the port was leased to the Soviet Union as a submarine base, and played an important part in the conflict between Enver Hoxha and Khrushchev in 1960-1961, as the Soviet Union had made considerable investments in the naval facilities and objected strongly to the loss of them as a consequence of Albania denouncing the USSR as 'revisionist' and taking the Chinese side in the split in the world communist movement. The Soviet Union threatened to occupy Vlora with Soviet troops in April 1961, and cut off all Soviet economic, military and technical aid to Albania. The threat was not carried out, as a result of the simultaneous development of the Cuban missiles crisis, but Hoxha realized how vulnerable Albania was, and, after the USSR invaded Czechoslovakia in 1968, he built the tens of thousands of ubiquitous concrete bunkers that still litter the entire Albanian landscape. Under Hoxha Vlorë was an important recruiting centre for the Sigurimi, the secret police.

In 1997, Vlorë was the center of popular riots after the collapse of several fraudulent investment schemes that led to the downfall of the administration, and almost precipitated the country into a .

Vlorë remains a major seaport and commercial centre, with a significant and industrial sector. The surrounding region produces , , and . The city is also the location of important installations of the .

Vlorë has grown in importance as an agricultural center with very large-scale planting of olive and fruit trees, and as a center of the food processing, oil and bitumen export industries.

has become a major industry in recent years, with many hotels, recreational centers, and vast beaches. It is a pleasant place to relax, to have a coffee and admire the beautiful view over the Bay of Vlorë.