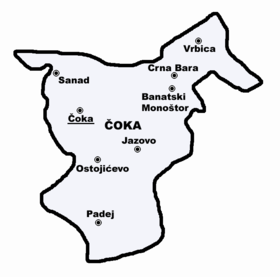 Čoka (Serbian: Čoka or Чока, pronounced [tʃɔ̝̂ka], Hungarian: Csóka, German: Tschoka, Slovak: Čoka) is a town and municipality in the North Banat District of Vojvodina, Serbia. The town has a population of 4,720, while Čoka municipality has 13,835 inhabitants.

The first written record about Čoka was made in 1247. It was part of a feudal tenure of which landowners were often changed. Later the settlement was abandoned due to the dense Cuman incursions at the end of the 13th century, but it was rebuilt again in the 14th century. In 1552, it was under Ottoman administration. At that time, it had a sparse population of 13 people, and at the end of the 16th century, the hamlet dwellers numbered 4 Serb families.[3]

In the first half of the 18th century, the Ottoman administration was replaced by the Habsburg one and according to 1717 data, there were 40 Serb houses in the village [4] of which number increased to 192 until the middle of the 18th century, and in 1787, the number of population increased to 1,191 people. In 1796, the tenure owner Lőrinc Marcibányi had Hungarians settled here that Slovaks followed then.,[5] which resulted in a rapid population growth and as early as the middle of the 19th century, the population numbered 2,739 people which increased to 4,239 until 1910. According to 1910 census, Hungarians were the dominant ethnic group in the village, while there existed a sizable ethnic Serb community as well.[6]

As of 1918, Čoka is part of the Kingdom of Serbs, Croats and Slovenes (later renamed to Yugoslavia). Until the end of World War II, it was part of Novi Kneževac municipality. Shortly afterwards, it became the seat of an own municipality, whereby it became an industrial centre of the region as well, receiving a large influx of new population. In 1991, it had a population of 5,244 people but In the next decade, the number of dwellers started to dwindle and 2002 census recorded only 4,707 people in the settlement.

Čoka municipality includes the town of Čoka and seven villages. The villages are:

Note: For the inhabited places with an absolute or relative Hungarian ethnic majority, the names are also given in Hungarian.

The population of the Čoka municipality:

The population of the Čoka town: