The valence of an element depends on the number of valence electrons that may be involved in the forming of valence bonds. A univalent (monovalent) atom, ion or group has a valence of one and thus can form one covalent bond. A divalent molecular entity has a valence of two and can form two sigma bonds to two different atoms or one sigma bond plus one pi bond to a single atom.[3] Alkyl groups and hydroxyl ions are univalent examples; oxo ligands are divalent.

Over the last century, the concept of valence evolved into a range of approaches for describing the chemical bond, including Lewis structures (1916), valence bond theory (1927), molecular orbitals (1928), valence shell electron pair repulsion theory (1958) and all the advanced methods of quantum chemistry.

The etymology of the word "valence" traces back to 1425, meaning "extract, preparation," from Latin valentia "strength, capacity," and the chemical meaning referring to the "combining power of an element" is recorded from 1884, from German Valenz.[4] 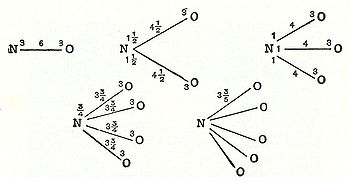 The exact inception, however, of the theory of chemical valencies can be traced to an 1852 paper by Edward Frankland, in which he combined the older theories of free radicals and “type theory” with thoughts on chemical affinity to show that certain elements have the tendency to combine with other elements to form compounds containing 3, i.e. in the three atom groups (e.g. NO3, NH3, NI3, etc.) or 5, i.e. in the five atom groups (e.g. NO5, NH4O, PO5, etc.), equivalents of the attached elements. It is in this manner, according to Frankland, that their affinities are best satisfied. Following these examples and postulates, Frankland declares how obvious it is that:[6]

This “combining power” was afterwards called quantivalence or valency (and valence by American chemists).[5]

The concept of covalence was developed in the middle of the nineteenth century in an attempt to rationalize the formulae of different chemical compounds. In 1919, Irving Langmuir, borrowed the term to explain Gilbert N. Lewis's cubical atom model by stating that "the number of pairs of electrons which any given atom shares with the adjacent atoms is called the covalence of that atom." The prefix co- means "together", so that a co-valent bond means that the atoms share valence. Hence, if an atom, for example, had a +1 valence, meaning it has one valence electron beyond the complete shell, and another a −1 valence, meaning it requires one electron to complete its outer shell (missing an electron) , then a bond between these two atoms would result because they would be complementing or sharing their out of balance valence tendencies. Subsequently, it is now more common to speak of covalent bonds rather than "valence", which has fallen out of use in higher level work with the advances in the theory of chemical bonding, but is still widely used in elementary studies where it provides a heuristic introduction to the subject.

For elements in the main groups of the periodic table, the valence can vary between one to seven, but usually these elements form a number of valence bonds between one and four. The number of bonds formed by a given element was originally thought to be a fixed chemical property. In fact, in most cases this is not true. For example, phosphorus often has a valence of three, but can also have other valences.

Because of the ambiguity of the term valence,[3] nowadays other notations are used in practice. Beside the system of oxidation numbers as used in Stock nomenclature for coordination compounds ,[7] and the lambda notation, as used in the IUPAC nomenclature of inorganic chemistry ,[8] "oxidation state" is a more clear indication of the electronic state of atoms in a molecule.

The International Union of Pure and Applied Chemistry (IUPAC) has made several attempts to arrive at an unambiguous definition of valence. The current version, adopted in 1994,[10]:

The maximum number of univalent atoms (originally hydrogen or chlorine atoms) that may combine with an atom of the element under consideration, or with a fragment, or for which an atom of this element can be substituted.[2]

Although hydrogen has only one valence electron, it can form bonds with more than one atom in hypervalent bonds. In the bifluoride ion ([HF2]−), for example, it forms a three-center four-electron bond with two fluoride atoms:

Another example is the Three-center two-electron bond in diborane (B2H6).

Valences of the elements

Maximum valences for the majority of elements are based on the highest known fluoride. Note that valence of hydrogen (H) and of fluorine (F) are both one. Astatine (At) is predicted to have valence of seven but is not known to have compounds with a valency above one.