The Flag of the State of Minnesota consists of a medium blue field charged with the state seal. The current flag was adopted in 1957 and the state seal in the flag was modified in 1983. 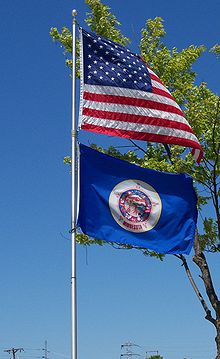 Photo of the state flag under a US flag

The first flag of the state of Minnesota was adopted in 1893; at that time a prototype flag was commissioned from the local embroiderer Pauline Fjelde, which won a gold medal at the Chicago World's Fair.[1]

The 1893 flag, designed by the Amelia Hyde Center of Minneapolis[2], was white on one side and light blue on the other. In the center was the state seal wreathed with white moccasin flowers, on a blue field. A red ribbon in the seal bore a motto, L'étoile du nord (French for "The North Star"). The years 1819 (establishment of Fort Snelling), 1858 (statehood) and 1893 (adoption of the first state flag) appeared in gold around the state seal. "Minnesota" was written under the state seal in gold and 19 gold stars arranged in clusters to form the points of a star, representing the fact that Minnesota was the 19th state added after the original 13 states. 87 circles around the seal represent Minnesota's 87 counties.

The flag was redesigned in 1957, eliminating the different-colored sides in favor of a blue field on both sides. This made the flag less expensive to manufacture and also more durable in high winds.[2] This opportunity was used to correct an error of the flowers used on the seal; instead of a Pink and White Lady's Slipper, the 1893 flag showed a variant that was not native to the state.[3]

The Minnesota flag has come under increasing criticism both for its poor design and its image in the seal of a farmer with his gun watching a Native American flee the land, which many feel is a depiction of Manifest Destiny and the inevitability of land being procured by white settlers.[4] On several occasions, bills have been introduced in the Minnesota Legislature to establish a legislative task force for studying changes to the flag,[5] and several alternative flag designs, such as the North Star Flag, have been put forth and widely endorsed by state politicians and newspapers. [6]

In 2001, the Minnesota flag was chosen as one of the ten worst flag designs in an online poll conducted by the North American Vexillogical Association. [7]

The law creating the 1957 state flag is located in Chapter 1 of the Official State Statutes. The chapter covers state symbols, sovereignty and other general issues. The location of the flag in the statutes is Section 1.141. The statute also requires the Secretary of State to keep a photograph of the official state flag and samples so they can be used by the public to make copies.[8] In Minnesota, desecration of the state flag is a misdemeanor offense under State Statute 609.40.