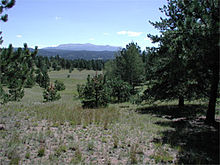 Pikes Peak stands beyond the valley

The Front Range is a mountain range of the Southern Rocky Mountains of North America located in the north-central portion of the U.S. State of Colorado and southeastern portion of the U.S. State of Wyoming[1]. It is the first mountain range encountered moving west along the 40th parallel north across the Great Plains of North America. The Front Range runs north-south between Casper, Wyoming and Pueblo, Colorado. Longs Peak, Mount Evans, and Pikes Peak are its most prominent peaks, visible from the Interstate 25 corridor. The area is a popular destination for mountain biking, hiking, climbing, and camping during the warmer months and for skiing and snowboarding during winter. Millions of years ago the present-day Front Range was home to ancient mountain ranges, deserts, beaches, and even oceans.[2].

The name "Front Range" is also applied to the Front Range Urban Corridor, the populated region of Colorado and Wyoming just east of the mountain range and extending from Cheyenne, Wyoming south to Pueblo, Colorado. This urban corridor benefits from the weather-moderating effect of the Front Range mountains, which help block prevailing storms.

About 1 billion years ago, the earth was producing mass amounts of molten rock that would one day amalgamate, drift together and combine, to ultimately form the continents we live on today. In the Colorado region, this molten rock spewed and cooled, forming what we now know as the Precambrian Pikes Peak Granite. Over the next 500 million years, little is known about changes in the sedimentation (sediment deposition) after the granite was produced. However, at about 500 – 300 million years ago, the region began to sink and sediments began to deposit in the newly formed accommodation space. Eroded granite produced sand particles that began to form strata, layers of sediment, in the sinking basin. Sedimentation would continue to take place until about 300 million years ago.[2]

Around 300 million years ago, the sinking suddenly reversed, and the sediment-covered granite began to uplift, giving rise to the Ancestral Rocky Mountains. Over the next 150 million years, during uplift the mountains would continue to erode and cover themselves in their own sediment. Wind, gravity, rainwater, snow, and ice-melt supplied rivers that ultimately carved through the granite mountains and eventually led to their end. The sediment from these once gigantic mountains lies in the Fountain Formation today. Red Rocks Amphitheater outside of Denver, Colorado, is actually set into the Fountain Formation.[2]

At 280 million years ago, sea levels were low and present-day Colorado was part of the super-continent Pangaea. Sand deserts covered most of the area spreading as dunes seen in the rock record, known today as the Lyons Sandstone. These dunes appear to be cross-bedded and show various fossil footprints and leaf imprints in many of the strata making up the section.[2]

30 million years later, the sediment deposition was still taking place with the introduction of the Lykins Formation. This formation can be best attributed to its wavy layers of muddy limestone and signs of stromatolites that thrived in a smelly tidal flat at present-day Colorado. 250 million years ago, the Ancestral Rockies were burying themselves while the shoreline was present during the break-up of Pangaea. This formation began right after Earth’s largest extinction 251 million years ago at the Permian-Triassic Boundary. Ninety percent of the planet’s marine life was destroyed and a great deal on land as well.[2]

After 100 million years of deposition, a new environment brought rise to a new formation, the sandstone Morrison Formation. The Morrison Formation contains some of the best fossils of the Late Jurassic. It is especially known for its sauropod tracks and sauropod bones among other dinosaur fossils. As identified by the fossil record, the environment was filled with various types of vegetation such as ferns and zamites.[2] While this time period boasts many types of plants, grass had not yet evolved.[2]

The Dakota Sandstone, which was deposited 100 million years ago towards Colorado’s eastern coast, shows evidence of ferns, and dinosaur tracks. Sheets of ripple marks can be seen on some of the strata, confirming the shallow-sea environment.[2]

Over the next 30 million years, the region was finally taken over the by a deep sea, the Cretaceous Western Interior Seaway, and deposited mass amounts of shale over the area known as the Pierre Shale. Both the thick section of shale and the marine life fossils found (ammonites and skeletons of fish and such marine reptiles as mosasaurs, plesiosaurs, and extinct species of sea turtles, along with rare dinosaur and bird remains). Colorado eventually drained from being at the bottom of an ocean to land again, giving yield to another fossiliferous rock layer, the Denver Formation. At about 68 million years ago, the Front Range began to rise again due to the Laramide Orogeny in the west.[2]

The Denver Formation contained fossils and bones from dinosaurs like Tyrannosaurus rex and Triceratops. While the forests of vegetation, dinosaurs, and other organisms thrived, their reign would come to an end at the K–T boundary. In an instant, millions of species are obliterated from a meteor impact in Mexico’s Yucatan Peninsula. While this extinction lead to the dinosaurs’ and other organisms’ demise, some life did prevail to repopulate the earth as it recovered from this tremendous disaster. The uplifted Front Range continued to constantly erode and, by 40 million years ago, the range was once again buried in its own rubble.[2]

Suddenly, 37 million years ago, a great volcanic eruption took place in the Collegiate Range and covered the landscape in molten hot ash that instantly torched and consumed everything across the landscape. An entire lush environment was capped in a matter of minutes with 20 feet of extremely resistant rock, rhyolite. However, as seen before, life rebounds, and after a few million years mass floods cut through the rhyolite and eroded much of it as plants and animals began to recolonize the landscape. The mass flooding and erosion of the volcanic rock gave way to the Castle Rock Conglomerate that can be found in the Front Range.[2]

Eventually, at about 10 million years ago, the Front Range began to rise up again and the resistant granite in the heart of the mountains thrust upwards and stood tall, while the weaker sediments deposited above it eroded away. As the Front Range rose, streams and recent (16,000 years ago) glaciations during the Quaternary age literally unburied the range by cutting through the weaker sediment and giving rise to the granitic peaks present today.[2] This was the last step in forming the present-day geologic sequence and history of today’s Front Range.[2]

The Front Range includes the highest peaks along the eastern edge of the Rockies. The highest mountain peak in the Front Range is Grays Peak. Other notable mountains include Torreys Peak, Mount Evans, Longs Peak, Pikes Peak, and Mount Bierstadt. 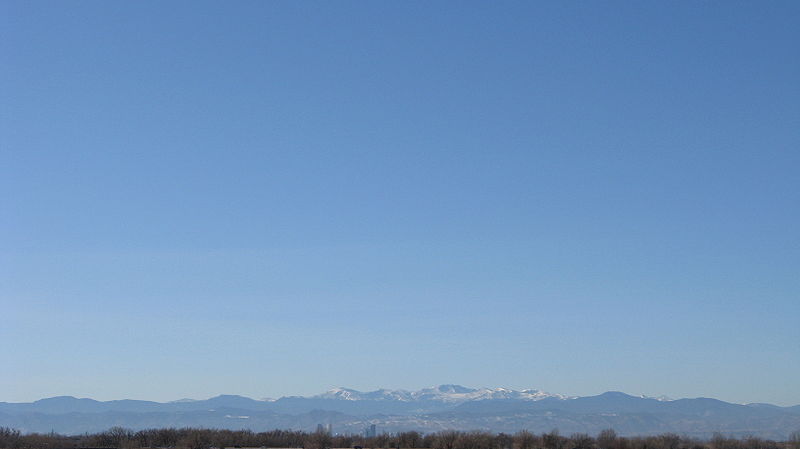 The Front Range as viewed from Tower Road east of Denver, Mount Evans is shown in the center

The Front Range as viewed from Greenwood Village south of Denver, Mount Evans is on the far right