The basic characteristics of organocobalt compounds are:

Cobalt forms complexes with triple bonded alkynes and cyano compounds. This property is exploited in the use of dicobalt octacarbonyl as protective group for alkynes. In the Nicholas reaction an alkyne group is also protected and at the same time the alpha-carbon position is activated for nucleophilic substitution.

Cobalt compounds react with dialkynes and dienes to cyclic intermediates in cyclometalation. Other alkynes, alkens, nitriles or carbon monoxide can then insert themselves into the Co-C bond. Reaction types based on this concept are the Pauson–Khand reaction (CO insertion) and alkyne trimerization (notably with cyclopentadienylcobalt dicarbonyl).

Organocobalt compounds are used as catalysts in carbonylation reactions and more specifically in hydroformylation , the formation of aldehydes from an alkene, formaldehyde and hydrogen. An important catalyst in this reaction type is HCo(CO)4 (cobalthydrocarbonyl) at one time used in the industrial production of butyraldehyde from propylene. In these processes cobalt catalysts are competing with rhodium catalysts such as HRh(CO)(PPh3)4]. In hydrocarboxylations hydrogen is replaced by water or an alcohol and the reaction product is a carboxylic acid or an ester. An example of this reaction type is the conversion of butadiene to adipic acid.

Cobalt catalysts (together with iron) are relevant in the Fischer-Tropsch process in which synthesis gas is converted to hydrocarbons. The basic reaction sequence is depicted below [3]:

In vitamin B12 cobalt has an octahedral geometry with a Co-C bond in an axial position. In methylcobalamin the ligand is a methyl group.

The weak cobalt(III)- carbon bond is exploited in so-called cobalt-mediated radical polymerization (CMRP) which is a type of controlled radical polymerization.[4] A Co-C bond containing radical initiator breaks up (by heat or by light) in a carbon free radical and a cobalt(II) radical species. The carbon radical starts polymer chain formation with monomer for instance an alkene as in any ordinary radical polymerization. Cobalt is unusual in that it can reversibly reform a covalent bond with the carbon radical terminus of the growing chain. This reduces the concentration of radicals to a minimum and also undesirable termination reactions by recombination of two carbon radicals. The cobalt trapping reagent is called a persistent radical and the cobalt-capped polymer chain is said to dormant. CMRP can be regarded as a series of carbometalation reactions of vinyl monomers. When the monomer possesses protons that can be easily abstracted by the cobalt radical, (catalytic) chain transfer may occur. 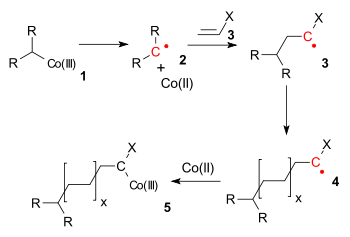 For this reason preferred monomers are acrylic and vinyl esters (e.g. vinyl acetate), acrylic acid and acrylonitrile. The reaction temperature is typically between 0 and 60 °C.

The concept was introduced independently by two groups in 1994.[5][6] Much studied cobalt compounds are cobaloximes, cobalt porphyrins and Co(acac)2 derivatives, used in combination with other radical initiators.

Cobalt compounds are catalysts in alkyne trimerisation. In the example of phenylacetylene a simple catalyst system of cobalt(II) bromide / zinc / zinc iodide suffices to obtain 99% chemical yield and 97% regioselectivity in favor of the ortho substituted reaction product 1.[7]

The reaction mechanism for trimerization is fairly well understood. A 2007 mechanism consistent with in silico and experimental data is depicted below for a cobaltocene catalyst [8] 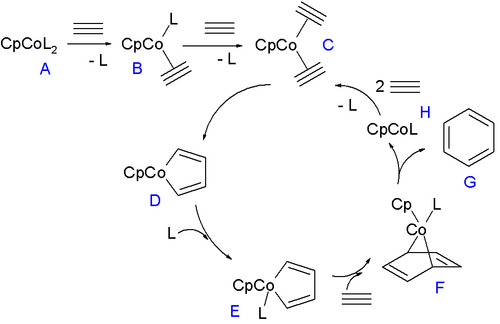 The ligand L in the 18-electron compound CpCoL2 (A) can be triphenylphosphine or carbon monoxide. These ligands are replaced by the alkyne in two steps forming first B and then C which enters the catalytic cycle by oxidative coupling to the 16 VE cobaltacyclopentadiene metallacycle D. This compound forms in its singlet state and therefore first relaxes to the triplet state. This intermediate coordinates to another equivalent of ligand to form E and then forms cobaltanorbornene F (see: norbornadiene) on accepting an alkyne unit in one [4+2]cycloaddition step. In the final step benzene is liberated in a reductive elimination with formation of CpCoL which can re-enter the cycle by accepting two units of alkyne. When the ligand is less of a sigma donor such as ethylene or THF (as a solvent) or when the alkyne is electron-poor as in butynedioic acid a different cycle takes over where another alkyne unit and not a ligand adds to intermediate D. In the remainder of this cycle (not depicted) the new intermediate forms an CpCo(η4arene) complex and then a CpCo(η6arene) sandwich compound before eliminating benzene and CpCo.

In one study, a combination of a [2+2+2] trimerization and a [4+2] cycloaddition gives access to a Taxol analogue[9] (Scheme 2 [10] ). In this reaction sequence the trimerization takes place in xylene with catalyst the cobaltocene CpCo(CO)2 (one Cp unit replaced by two carbonmonoxide ligands) and with irradiation. The two main components are held together by a temporary silicon tether. 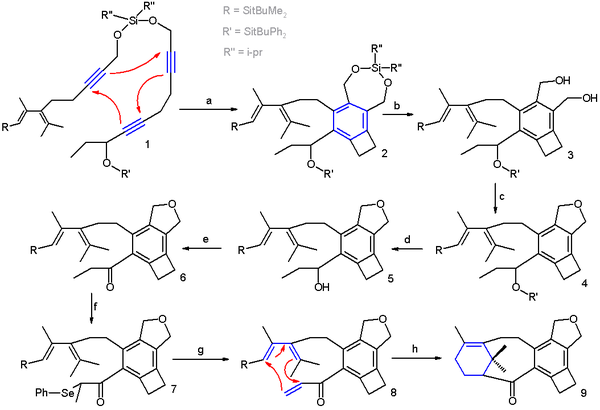